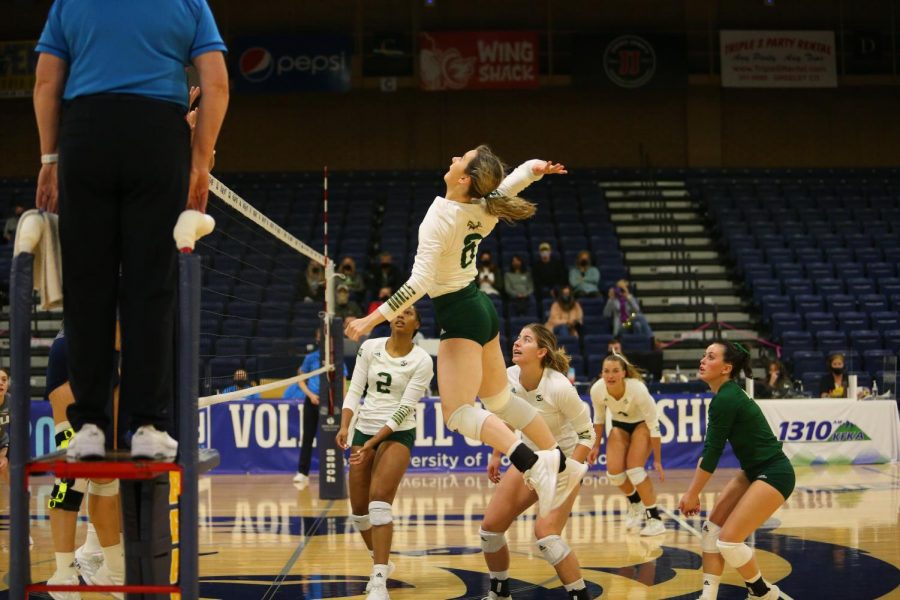 Freshman outside hitter Bridgette Smith attempts a kill at the Bank of Colorado Arena on Wednesday, March 31, 2021 in the Hornets' first round matchup against Northern Arizona. Sac State lost the match 3-0 as their season came to an end.

A season like no other, met with in-game mask-wearing, weekly testing and schedule adjustments, finally came to an end for the Sac State volleyball team in a crushing 3-0 loss against Northern Arizona University in the first round of the Big Sky Tournament in Colorado.

The fourth-seeded Hornets (10-7, 10-7 Big Sky) came into their first-round matchup against the fifth seeded Lumberjacks (10-5, 10-5 Big Sky) with decently even statistical comparisons in categories such as attack percentage and blocks. However, this Hornets’ loss ended with a lopsided result that would have you think otherwise.

The Hornets found their struggles early in the first set, struggling to contain the aggressive offensive approach from the Lumberjacks. Despite trading off early kills, Sac State was met with an assertive attack from NAU that saw creative dig plays and dominating counters to their serves.

On top of being challenged with NAU’s offense, Sac State found itself on the negative end of its own miscommunication, having yielded 13 attack errors, which majorly contributed to extending the Lumberjacks’ lead. Sac State went on to drop the first set 25-13.

In the second set, Sac State showed significant signs of recovery and established an early 4-0 lead after consecutive forced errors off of crafty serves from senior outside hitter Macey Hayden. The Hornets also reduced their attack errors to eight, five less than the previous set.

Despite this however, the Hornets were eventually overcome by a Lumberjack comeback that was a result of several Sac State defensive breakdowns.

NAU went on a run that at one point hit eight consecutive kills, destroying the Hornets’ early momentum. After their run, the Lumberjacks went on to eventually take a lead that was never surmounted by the Hornets, as NAU took the second set 25-20.

Set three was simply an utter domination on the part of the Northern Arizona offense. Right out the gates, the Hornets struggled to limit the Lumberjack attack, with NAU scoring off of three straight kills and a Sac State error. The Hornet deficit at one point was nine, trailing with a score 13-4 after a 10-2 NAU run that was birthed by multiple consecutive aces and kills in response to Sac State serves.

Despite the staggering loss putting an end to the 2021 season, this group of lady Hornets won’t be going anywhere for the most part. The team will be returning 14 of the 15 players, with every starter expected to be back for the 2021-2022 season. With continuity on this squad being in the state it is, Sac State can hopefully use that to its advantage next fall.