Softball team sisters share connection ‘only a sibling will understand’

First sisters on the same Sac State softball team since 1997 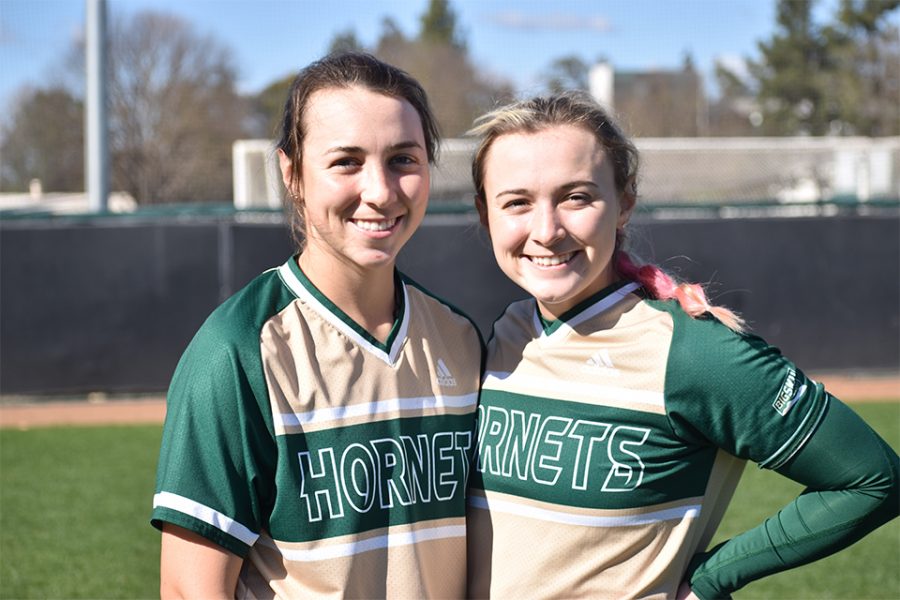 It was the summer of 2019 when Alexis Parish was scouted while at a softball camp and asked to be on the same softball team as her sister, Samantha Parish, at Sac State University.

They were to be the first sisters the Sac State softball team had seen play at the same time since 1997.

Even while interviewing the sisters on the field, it can easily be seen that their relationship is really close and that they have a good friendship. They stood very close while practicing, would make a lot of eye contact with each other or gestures when talking about their life at home and would look to each other for reassurance when talking about things like what they need to work on as players and as sisters.

Samantha Parish is a sophomore catcher on the Sac State softball team and is majoring in geology and geography. Of the 21 games played so far this season, Samantha Parish has played 18 scoring one run with a batting average of .200. During the 2020 season, Samantha Parish was able to play 19 games before the season ended due to the COVID-19 shutdown. She came out of the shortened season with five runs, two doubles, and three RBIs.

“I love our friendship,” Samantha Parish said about her sister. “Like at each other, in a competition, if she’s doing good, she’ll get on me and if I’m doing good, I’ll get on her. It’s that back-and-forth we have for each other.”

Alexis Parish is the younger of the two sisters and is currently a freshman outfielder on the Sac State softball team who is majoring in child development. She was committed to the softball team before starting her first semester at Sac State.

Of the 21 games that have been played by the Sac State softball team this 2021 season, Alexis Parish has played in 15 games, scoring two runs with a batting average of .303.

Before Alexis Parish came to Sac State, Alexis Parish played travel fastpitch softball for the Batbusters, which is when she was scouted to be on the team for Sac State. Batbusters was located in Stockton while the sisters both still lived in Morgan Hill, so they would have to travel about two and a half hours to go to their practices.

Alexis Parish and Samantha Parish both played Little League in Morgan Hills until Alexis Parish was able to get into the same bracket, 16 and up, with her sister.

Although Alexis Parish and Samantha Parish have both been playing softball ever since they were young, they have not been able to play on the same team until recently, usually kept on different teams due to age brackets.

“Sam was here first and I wanted to follow her, because it’s better for my parents since they put so much into us playing that I wanted them to be able to see all of the games,” Alexis Parish said.

Head softball coach Lori Perez said she had never coached two sisters on the same team in the eight years she has been a head coach. She said she knows what it is like to be a sibling, though, having two older brothers.

“It’s not different in coaching them one on one, individually,” Perez said. “It’s the same. The individual connection and communication that you wanna have with the players is the same.”

Samantha Parish felt that even though Alexis Parish was coming into a new team during the pandemic, she had everything she needed to succeed, having a sister on the team.

“I feel like she’s a freshman, of course, but I’m always there for her showing her the ropes,” Samantha Parish said. “Like ‘Hey, do this, do that.’ So I feel like I was that extra side weight for her. I would be like ‘if you have any questions, you know, ask me.’”

“I think that if people asked and they knew they were sisters, they might guess that Lexi is the older one,” Perez said.

Perez said she thinks that Alexis Parish seems like the older sister at times, describing her as outspoken and is the type to do whatever she wants, as long as she puts her mind to it.

Skylar Mitchell, a teammate of both the sisters, said she agrees that Alexis Parish is very outspoken when talking about what she thinks the sisters bring to the team.

“Sam is a very fast-paced player, she knows the game very well, and is a great teammate,” Mitchell said. “And Lexi is a very vocal teammate and someone who always has your back.”

Mitchell said she also knows what it’s like to have siblings, having a younger brother and sister herself. She said she loves having the sisters on the team because they both offer different things.

“They are really supportive of one another and give each other props for when one does something good and cheer each other on,” Mitchell said. “They want to see each other accomplish their goals during the game and do a great job of being supportive.”

“It’s like 5 minutes you’ll be super mad at them and then two seconds later, you’re like laughing… only a sibling will understand,” Samantha Parish said.

Samantha Parish encourages students to keep up with the games by watching their livestream on Hornetsports.com or checkout their game highlights on instagram @Sacstatesoftball.