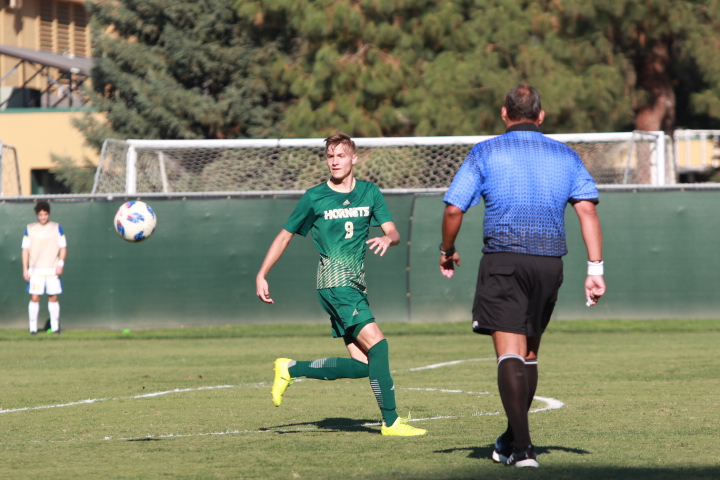 Sacramento State freshman forward Benji Kikanovic tries to gain possession of the ball during a match against UC Riverside on Saturday, Oct. 20, 2018. Kikanovic signed a one year deal with the San Jose Earthquakes on Feb. 16, 2021.

Sacramento State alumnus and former men’s soccer player Benji Kikanovic has made it to the big leagues, signing a one-year deal with the MLS San Jose Earthquakes on Feb 16.

Last season, the Earthquakes finished eighth in the Western Conference standings with a record of 8-6-9. Kiknanovic appeared on the Earthquake’s radar with his efforts and outstanding ability.

“We are very excited for Benji,” said Michael Linenberger, Sac State men’s soccer coach. “We knew when we recruited him that his ultimate goal was to be a professional soccer player. We knew that he probably wouldn’t be here for four years. He had opportunities to leave after his first year, but ultimately decided to stay for one more year. We wish him all the best.”

Kikanovic was known for his skills and character when he played for the Hornets from 2018-19. In his two years at Sac State he made 34 appearances, scoring 9 goals and tallying 5 assists. In Kikanovic’s freshman campaign he led the Hornets with 14 points, scoring 5 goals and adding 4 assists. He was named the Big West Conference’s freshman of the year, which is the first time a Hornet has won the award since they joined the Western Athletic Conference in 2012.

“He is a player that we thought very highly of in college and we were impressed by his transition to the professional game last year,” said Earthquakes General Manager Jesse Fioranelli. “We’ll create an individualized program for him and believe in his future in MLS.”

Coach Linenberger said that Kikanovic is not only an excellent soccer player, but he has great character and is very humble.

“Benji is a very good attacking player, he has excellent speed, very good technical ability and he reads the game very well.”  Linenberger said. “He can set up scoring opportunities for his teammates as well as score goals himself.”

Kikanovic will now have the opportunity to showcase his talents in the MLS.

“Benji will have a successful playing career as long as he can stay healthy,” Linenberger said.  “He has natural talent and natural athleticism, and he has a strong desire to always improve and succeed.”