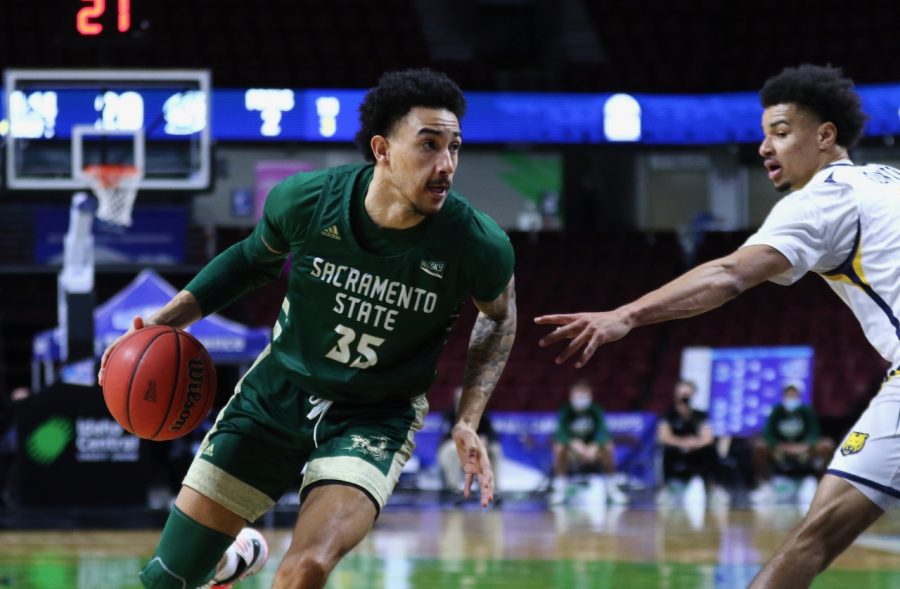 Senior forward Christian Terrell drives to the rim against Northern Colorado in the first round of the Big Sky Conference Tournament on Wednesday, March 10, 2021. The Hornets were defeated by the Bears 90-83, ending their season. (Photo courtesy of Big Sky Conference)

In a season met with adversity and resilience, the Sacramento State men’s basketball team’s early morning matchup on Wednesday proved to be no different. There were highs and lows but ultimately the season ended with a disappointing 90-83 loss to Northern Colorado.

The Hornets (8-11, 5-9 Big Sky) struggled to get stops against the Bears (10-10, 6-8 Big Sky) despite an impressive offensive showing from their talented upperclassmen.

In the opening stretch of the first half, Sac State didn’t have an answer to defend the 3-point line, allowing the Bears to open the game with a 7-0 run ignited by back-to-back threes. The Hornets, who’s identity lives on getting stops and playing in transition, needed to disrupt the Bears offensive rhythm to have a chance.

“They have a great scheme on offense,” said head coach Brian Katz. “They spread you out and put you in rotation, and at this level, you don’t want to be put in rotation.”

After falling behind 19-9, the Hornets found life on offense with their own 10-5 run that was led by junior guard Zach Chappelle. Chappelle, who shot 6-6 from the field in the first half and 2-2 from three, was able to create in the half-court for a Sac State squad that was struggling to get out in transition.

“We’ve tried to expand our bench as the year has gone on,” Katz said. “Zach Chappelle is a key guy for us, he missed the entire season and beginning of league with a knee injury, but we knew he would be really good for us.”

Game 1 has been a good one so far!! SAC #4 Zach Chappell gets the mid-range jumpshot for the Hornets. pic.twitter.com/ozDsdDlCth

The Hornets also saw major first half offensive contributions from senior forward Bryce Fowler, who finished with 12 points in the first 20 minutes of action and notched himself in the Sac State 1,000 point club during the game. Fowler showed his dynamic versatility in every way, whether it was mid-range jumper, low-post hook shots or transition layups.

Going back-and-forth with exchanging runs, the Hornets were able to eventually take the lead at approximately the five-minute mark of the first half after a toughly-converted layup by senior guard Christian Terrell.

Sac State shot 63% from the field from the field overall and 80% from three-on-five attempts in the first half, allowing them to go on a 8-4 run and achieve a 45-43 lead going into halftime.

Sac State saw defensive breakdowns early in the second half as Northern Colorado once again found an offensive stride. The Bears were able to get easy layups and hit a corner three that capped off a 7-0 run.

The Bears’ second half output on offense was met with hard-fought resiliency from the Hornets. Senior forward Ethan Esposito went to work in the paint, putting pressure on the Bears which opened up the floor on offense for the Hornets.


Despite the gritty offensive performance from Sac State, they couldn’t overcome the shooting efficiency from Northern Colorado. The Bears shot 56% from the field and 64% from three, even with an aggressive Hornet defense contesting well.

“We definitely wanted to limit their looks from three, obviously we didn’t do a great job with that,” said senior forward Bryce Fowler. “We were focusing on the right things, we knew their game plan and what they were gonna do, we just didn’t execute.”

For the Hornets, their season concluded on a very winnable game that was met with challenges they couldn’t overcome.

In a year that was met with several cancellations and postponements, their 2020-2021 campaign came with many exterior obstacles. But pandemic or no pandemic, the efficient offensive explosion from the Bears was too much to overcome.

Despite the loss, players are feeling grateful for the opportunity to play and create a lasting bond as a team amid these tough circumstances.

“Being able to build a brotherhood with my teammates, that speaks louder than the games or the wins and losses,” senior forward Bryce Fowler said. “Spending time in the hotel or hanging out off the court, is more so the stuff I’ll remember forever.”