Jennifer Koga off to a fast start in her first season 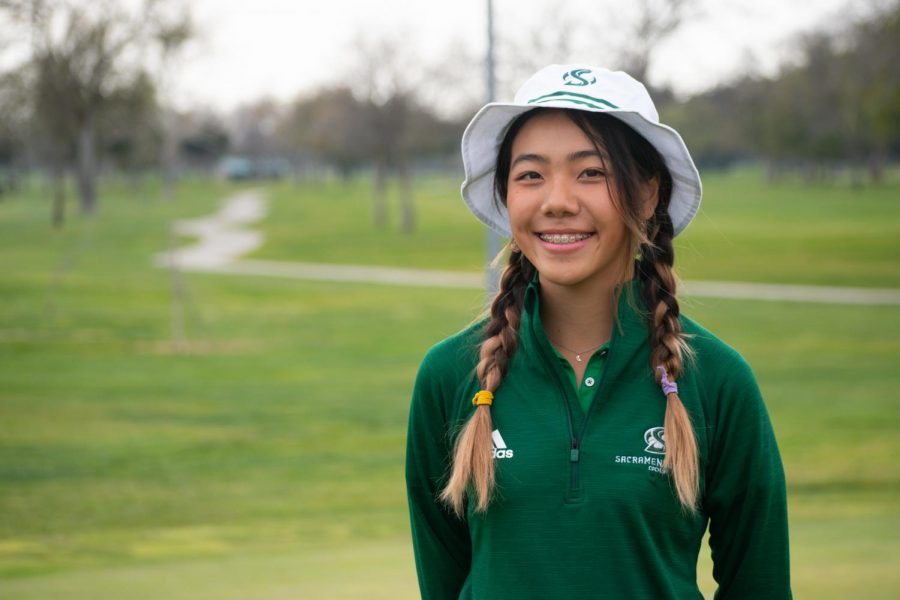 Freshman golfer Jennifer Koga poses for a photo at Haggin Oaks Golf Complex on Wednesday, March 17, 2021. Koga tied for fifth at the Gunrock Invitational after scoring a 68.

Before any club is swung, in order to prepare for a golf match, Sac State freshman Jennifer Koga says waking up early is key to locking in mentally before the start of any tournament.

Koga was groomed to play golf at an early age. She grew up as the middle child between older sister Eimi and younger sister Ashley in Honolulu, Hawaii, where the three were practically raised on the golf course.

“My oldest daughter was already playing competitive golf by the time Jennifer was born.  It’s easy to say that Jennifer and Ashley were raised on the golf course since they always came along to Eimi’s practice,” said Yukio Koga, Jennifer’s father.

At 7 years old, Koga started her own golf journey where she would compete in golf tournaments against the top golfers in her state every year until she graduated high school. Koga has seen what success on the golf course should look like at an early age, witnessing her sister Eimi go on to play golf at the University of Washington on a full ride scholarship and eventually on a professional level in Japan.

It wasn’t until Koga turned 12 that she decided she wanted to compete for a Division I scholarship. Seeing her older sister Eimi take it to another level and earn a scholarship was all the motivation that Koga needed.

“I was around 12 when I started to aim for a college scholarship, because my older sister got a scholarship to the University of Washington and I felt like if she could do it, I could do it too,” Koga said.

Koga’s father said the difference between her and other athletes her age is her ability to have a neutral mental state that allows her to see from a third person’s point of view.

So far, Koga has proved her father to be correct in her first season at Sacramento State. In three of her last five events, she’s placed in the top five with low individual scores. She had her best finish at the Meadow Club Invitational, where she tied for second in individual scores and helped her team place fifth overall in the tournament.

Prior to starting the season, Koga said that she was overwhelmed because she wasn’t familiar with the team dynamics and how important they were. Most of her teammates are long shooters, which means they could hit the ball further, but the key to being successful for Koga is sticking to what she knew and playing her game.

“I had to stick with my own game and just maximize my ability to do what I can do, which is consistency,” Koga said. “I noticed that long shooters are usually not the best at short games, which is chipping and putting. I took the time to excel in those, so even if I were to make a mistake and miss the green, I could still be confident that I could save par, maybe make a birdie if I’m lucky, and stay on my game.”

Although Koga has a different game style from a lot of her teammates, one of her teammates that helped her adjust to play at a Division I level was sophomore Tess Blair. Blair had success as a freshman as well, earning Big Sky Player of the Year, Freshman of the Year, and First Team All-Conference in her first season as a Hornet.

Blair said she knew what it was like to be a freshman and have doubts of not performing well in their first season for being too young or being a first-season player. She wanted to remind Koga that it’s possible to have success in her first year, and play great golf.

“I just reminded her that, even though you are the youngest on the team, that doesn’t mean you can’t play great golf,” said Blair. “You’re here for a reason, you deserve to be here.”

Koga hasn’t been shy of taking advice from her fellow teammates, but even so, Blair said Koga has consistently stuck with what has worked for her, and that has been the reason she’s been so successful early.

“I was just able to walk on to these tournaments with the utmost confidence that I could produce a good score, and even if I’m not the longest hitter I can still get low scores,” Koga said.

Koga said her ultimate goal is graduating, but golf-wise, she wants to be able to compete at an elite level against elite golf schools that are presumably better than Sac State.

“People don’t really think of Sac State as a power school, and I think that by doing my best in my own game, I could motivate the rest of my teammates to work harder and perform well, as well,” Koga said.