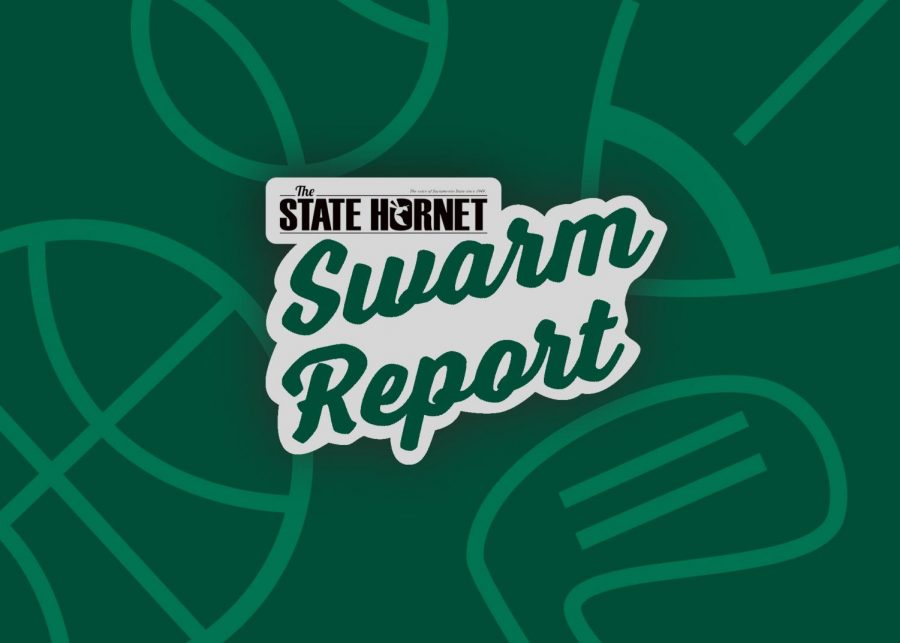 Montana State (11-8, 8-5 Big Sky) got things going with the first bucket, but the game quickly turned into a back-and-forth affair.

It was a close battle the entirety of the first half with the Hornets getting a boost offensively from senior guard William FitzPatrick who scored 18 points in the first half. The Hornets went into the half with a one point lead 36-35.

The Hornets trailed by as much as seven with three minutes remaining but then stormed back in the last minute of the game after a steal and layup by senior forward Bryce Fowler to cut the deficit to two. But it wasn’t enough as Montana was able to seal the game with a couple of free throws.

The Hornets will play the Bobcats again for their final game of the regular season Saturday at 11:05 a.m.

The Sac State softball team lost the first game of their doubleheader to Santa Clara 7-2 Friday.

The Broncos got off to a hot start, scoring three runs in the first four innings while Sac State had trouble finding much rhythm at the plate.

The Broncos eventually broke the game open in the later innings, tacking on three runs in the seventh to put the game out of reach.

Junior Liyah Lopez made the start for the Gaels and went 3 ⅔ innings before being relieved by sophomore Lauren Anderson who picked up the win. Sophomore Regan Dias locked down the save for Gaels, pitching the final 2 ⅓ innings.

In the second game Hornets’ sophomore Marissa Bertuccio pitched a flawless game, tossing her third shutout of the season as the Hornets picked up all of their runs in the sixth inning to secure the split with a 3-0 win.

In the two games junior Alondra Mejia had for four hits and sophomore Samantha Parish had three hits.

The Hornets will play at home against University of the Pacific on March 7 at 11 a.m.

Turnovers plagued the team from the start as the Hornets ended the game with 18 turnovers which led to 25 points for Montana State.

Junior guard Jordan Olivares led the Hornets in scoring with 17 points and junior guard Summer Menke had 12 points with 11 rebounds in the loss.

The Sac State men’s tennis team faced off with Saint Mary’s and ended with a win by a score of 4-3.

In the singles matches, Sac State got a good start with senior Hermont Legaspi defeating Kesaris Damon 6-4, 6-4 in the first match and the Hornets went to win four of the six matches.

In doubles matches, Sac State had a good start until the second match when the Gaels’ James Watt and Boris Reckow defeated the Hornets’ Hermont Legaspi and Michael Vizcarra by a score of 7-6, 7-4.

The Hornets’ Jan Silva took the last singles match over the Gaels’ Matis Bot to seal the one set victory over Saint Mary’s. The two squads will play each other again on March 12 at 1 p.m.

Ninth inning heroics earns baseball a 2-1 win over Santa Clara
In the second game of a four-game series, Sac State’s got the victory as they won against Santa Clara by a score of 2-1.

Santa Clara jumped out to a quick lead in the first inning thanks to a home run by Jake MacNichols to make the score 1-0.

The Hornets were shut down until the top of the eighth when junior infielder Steven Moretto tied the game with a home run over the left field wall to even the score at one.

In the ninth inning, the Hornets were able to get the big hit at the perfect time when senior outfielder Matt Smith hit a go-ahead double, bringing in freshman Isaiah Parker. Closer Stone Churby sealed the deal with his fourth save of the season and the Hornets won 2-1.

The two teams will face off again Saturday at 6 p.m. in the third game of the four-game series.