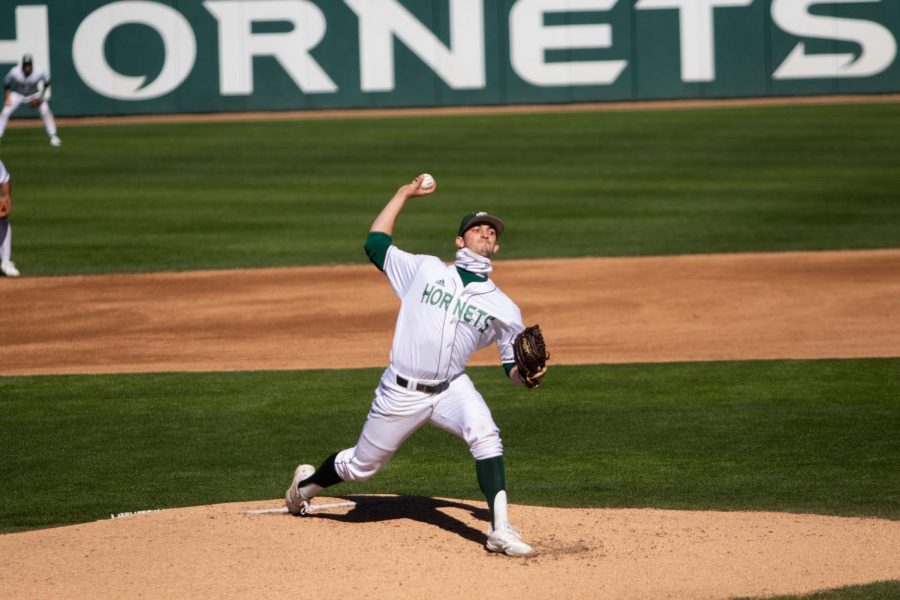 FILE PHOTO: Hornet baseball team pitcher Scott Randall pitches against Texas State on February 27. Randall leads the team in wins and innings pitched and is tied for first in strikeouts.

As the Sacramento State baseball team readied for its third straight weekend series in the third different state, the Hornets looked to stay hot versus conference foes the Utah Valley Wolverines. And hot the Hornets stayed, sweeping the Wolverines in a four-game set and scoring 37 runs over the weekend.

After two weeks of conference play, the Hornets (7-1,14-5 overall) sit second in Western Athletic Conference standings behind California Baptist University (4-0 in conference).
Game 1: Offense comes out strong, beats Utah Valley 8-3
The scoring began in the top of first for the Hornets, and they didn’t look back from there. First baseman Ryan Walstad lofted one out of the ballpark to give the Hornets a 2-0 lead. The next inning, Steven Moretto hit a long ball of his own and the Hornets were off to the races.

Goodbye, baseball! Ryan Walstad’s first homer of the season, a two-run shot, puts the Hornets ahead in the first. #StingersUp #WACbsb

Game 2: Hornets outlast Wolverines, sweep Friday doubleheader
In the beginning of Friday’s nine-inning nightcap, it seemed as if the Hornets would continue their momentum from the first game and roll to another WAC victory when Walstad singled in Trevor Doyle in the top of the first to give the Hornets a 1-0 lead, however unlike game one, the Hornets would have to battle until the very end.

Utah Valley took the lead on a two-run home run by hitter Kade Poulsen in the bottom of the fourth, however the next inning the Hornets tied it then the following inning Sac State scored three to give the Hornets a 5-2 lead. That lead then blossomed to 8-3 thanks partly to another Steven Moretto home run.

In the ninth, out came Cole Tremain, the Hornets’ reliever and fifth pitcher of the ballgame. Tremain allowed a two-run shot of his own before closing things out with a score of 8-5.
Game 3: Doyle and offense stay hot, Hornets win 10-4
Right fielder Doyle was a triple shy of the cycle in the first of two games Sunday. Doyle went 4-5 with two RBIs leading the way for the offense.

The Hornets jumped off to a 3-0 lead in the third. Utah Valley answered in the bottom half of the inning when the Wolverines’ Alexander Marco took Sac State pitcher Travis Adams deep for a three-run shot to tie the game.

Doyle then left the ballpark himself, driving home Keith Torres in the process. Later in the same inning, Steven Moretto hit a homer of his own, this one a three-run shot to put the Hornets up 8-3.

Other than the home run, it was smooth sailing for Adams (3-1, 3.09 ERA) allowing just three runs over the seven innings, allowing just six Wolverines to reach base.

That ball is outta here! Trevor Doyle puts the Hornets ahead with a two-run shot here in the fourth. #StingersUp #WACbsb

Game Four: Utah Valley implodes, Hornets sweep Four-Game Series
After three games of the Hornets imposing their will upon Utah Valley, it looked as if the tides were changing in the fourth game of the series; the Wolverines owned a 5-0 lead heading into the 7th inning.

Then the wheels fell off.

The Hornets scored eight times in the seventh and added three more in the eighth to power the Hornets to a series sweep by the final score of 11-7.

The Hornets had a two-out rally for the ages in the seventh, with seven runs that inning coming guided by two crucial errors by Utah Valley: one a dropped fly ball by Wolverine left fielder Jeff Arens in which two runs were scored, the second a throwing error to second base in which the throw was wide and ended up at the centerfield fence, allowing Bacho an inside-the-parker thanks to some shoddy defense.

Smith added a three-run homerun and it was all she wrote for the Wolverines, who now fall to a 2-13 record on the year.

Next up for Sac State is a home weekend series versus Dixie State University starting Friday.