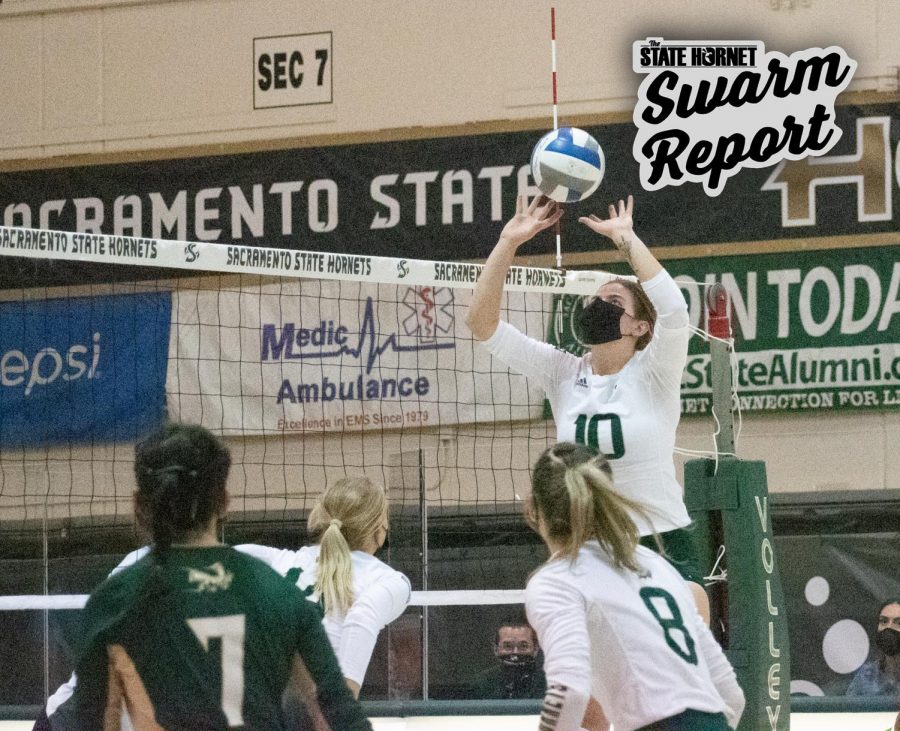 It was a Saturday for Sac State athletics. The track and field team had a fair showing at the Ben Brown Invitational while the softball team lost the first of a two-game series against No.5 Oregon and the baseball team lost a high-scoring affair at Tarleton. The volleyball team lost at home and the women’s tennis team lost visiting Nevada.

The Sac State track and field team had a tough weekend at the Ben Brown Invitational at Cal State Fullerton.

Senior Artearra Coffey, hurdler, placed second in the women’s 100-meter hurdles with a mark of 14.73 seconds and freshman Kameryn Brown got third coming in at 14.8 seconds.

In the 400-meter run, senior Mikayla Revera clocked in second at 56.85 seconds and freshman Sarah Collier third at 57.45 seconds.

Although they didn’t get the win as a team, Sarah Collier placed first in the women’s 800-meter run at 2 minutes 13.31 seconds Friday.

The track and field team will compete next when it hosts the Hornet Invitational on March 20.

The Sac State baseball team lost to Tarleton 16-13 in a drizzly game at Cecil Ballow Baseball Complex on Saturday after coming out with the lead early.

The Hornets (9-5) hit hard and fast scoring eight runs with just their first 11 batters in the first inning.

The Hornets loaded the bases early which led to a 2 RBI single by Martin Vincelli-Simard, sophomore designated hitter, that hopped over the third baseman making it 3-0. Freshman second baseman Jorge Bojorquez, hit a three-run home run shot that made it an 8-0 lead for the Hornets in the first inning.

The Hornets tacked on a run in the second inning but the Texans (7-10) clawed back in the second and third innings to bring the score within a run at 9-8. They then exploded in the fourth inning with seven runs fueled by four home runs, giving the Texans a 15-9 lead.

The Hornets fought back when junior catcher Dawsen Bacho hit a three-run home run that made it 15-13 in the eighth, but it wouldn’t be enough as the Texans held their two-run lead to win the game.

Get Bachoed! Dawsen Bacho gets in on the slugfest and his three-run blast makes this a two-run game in the eighth. #StingersUp #WACbsb

The baseball team wraps up its four-game series against Tarleton on Sunday.

The Hornets (6-14) have only scored one run in its last six games and got only one hit in today’s game. The hit came after a 17 inning drought without a hit.

The hitting slump for the team continued as the first six batters struck out for the Hornets and failed to score a run in today’s loss.

Sophomore pitcher Marissa Bertuccio gave up 2 runs in the first inning giving the Ducks a 2-0 lead. A five-run third inning put the Hornets behind 7-0 and four runs in the fourth put the game out of reach at 11-0.

The softball team plays No. 5 Oregon again Sunday at 10 a.m.

The third set was tough for the Hornet’s who got behind early, losing 25-23 and didn’t have the lead at any time in that set. The fourth and final set ended with another Hornet loss 25-21.

The team remains winless on the season at 0-10.

Freshmen Grace Dodd and Tsveti Yotova defeated their opponents 6-4 in the No. 3 doubles match.

Sophomore Jordan Nielsen won her team-leading fourth singles match of the season and won three of her last four at the No. 1 position.