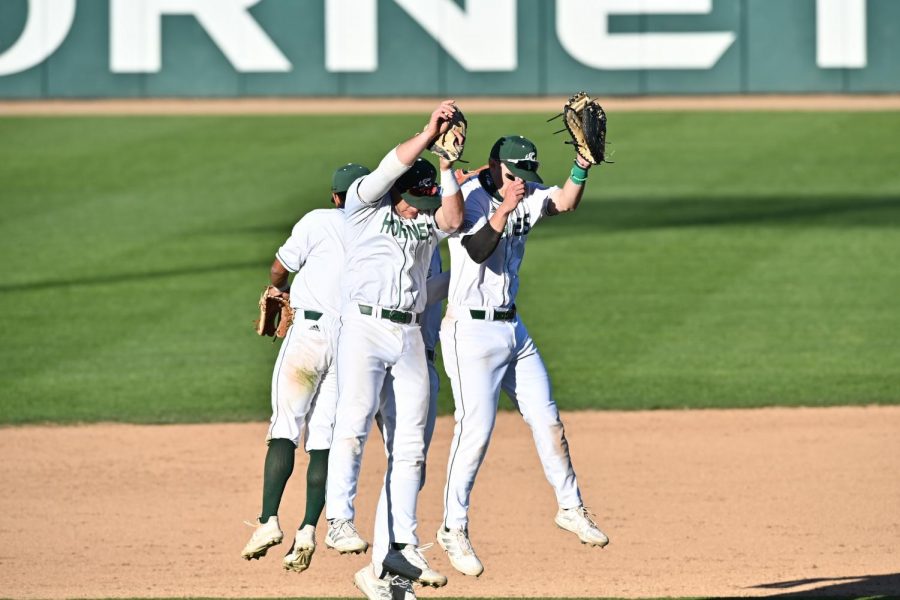 The Sacramento State baseball team took three out of four games against the Dixie State Trailblazers in their first home conference series.

The Hornets improved their WAC record to 10-2 and 17-6 overall. Despite suffering their first home loss of the season, the Hornets and their offense remained lively over the weekend set against the Trailblazers (4-8 WAC, 6-15 overall). The Hornets look to continue the momentum next week as they have five non-conference games versus Stanford and Creighton.
Game 1: Randall dominates with Sac State record with 14 strikeouts in 9-3 win
26 Dixie State Trailblazers came to the plate versus junior right-hander Scott Randall on Friday and 14 were sent back to the dugout, unable to put the ball in play. Randall (4-0) was electric for Sac State as he has been all year and went seven innings, allowing one run on four hits to go along with the record day.

So far Scott Randall ranks either first or second in the WAC in:

“It was one of the first times all year he was able to command the fastball down in the strike zone, I think two or three starts in a row, he was up, I mean obviously he’s good, he’s a competitor, he gets out of jams,” said Reggie Christensen about his ace pitcher after the game Friday.

“Today he was more down in the strike zone and I think that is what led to more strikeouts.”

As Randall set the tone on the mound, tying a Sac State game record of 14 K’s,  the Hornets delivered at the plate as well, totaling nine runs over eleven hits. Matt Smith went 3-4 with two RBIs, and Jorge Borjorquez added two more RBIs while scoring three runs of his own.

Scott Randall has tied the single-game record with his 14th strikeout of the day!

Randall is one of just two pitchers with 14 strikeouts in a single game in program history. #StingersUp pic.twitter.com/L65YHHBCKG

For Rodriguez (4-0), his appearances have come a little differently as Saturday marked his 10th outing of the season, all out of the bullpen. It’s been quite successful for the Hornets, as Rodriguez has recorded a 1.53 ERA while totaling 17 strikeouts in 17.2 innings so far.

Rodriguez finished Saturday’s seven inning ballgame by throwing the last four innings, giving up just one run, combining with Eli Saul (1-1), who went the first three innings for the Hornets.

The Hornets found themselves down 3-1 in the third inning when Chris Gonzalez hit a two-run double to give Sac State the lead. The Hornets scored four runs in the next inning and never looked back, holding on for a 9-4 victory.
Game 3: Hunter and the Hornets slug their way past Dixie State
Freshman Hunter Dorraugh went 4-4 as the Hornets reached double digits in runs for the third time in the past five games as they beat the Trailblazers 10-5 in the second game of Saturday’s doubleheader.

Jorge Bojorquez opened the scoring in the first inning with a two-run home run, which was matched when Dixie State’s Chase Rodriguez hit a two-run shot of his own, tying the game at two.

Dorraugh gave the Hornets the lead with an RBI single, but then in the fourth, Dixie State took a lead of their own after another two-run homer, this one by Drake Benner, and the Trailblazers led 4-3.

The Hornets wasted no time responding, scoring three in the bottom of the frame, and in the fifth, right fielder Aaron Zeidman and Dorraugh launched back-to-back solo home runs to put Sac State up 8-5. The Hornets added two more when Keith Torres doubled and brought in two more runs in the seventh to end the game’s scoring.

Zalasky has been another terrific bullpen piece for the Hornets, as he’s appeared in ten games while pitching to a tidy 1.15 ERA with 22 strikeouts.

Noah Takacs got the start and went three innings, allowing three runs, and when Hornet center fielder Trevor Doyle hit a three-run shot in the bottom of the third that gave Sac State a 4-3 lead, Takacs exited with the lead.

However the lead did not last long. Dixie State’s Lane Pritchard hit a two-run double, two of his four RBIs on the day to reclaim the lead for the Trailblazers.

The Hornets tied it up with a bases loaded walk by Keith Torres to even up the ballgame.

Dixie State scored one in the seventh and another in the ninth as they held on 7-5 to avoid a four-game sweep.

Get out in a hurry!

Doyle lined a three-run home run off the foul pole in right and the Hornets are back on top. #StingersUp

The Hornets, despite Sunday’s loss, still took three of four as they now turn their focus to their matchup with  the Stanford Cardinals on Monday, with first pitch at 3 p.m, watchable on the WAC Digital Network here.