32 shows, but there can only be one winner 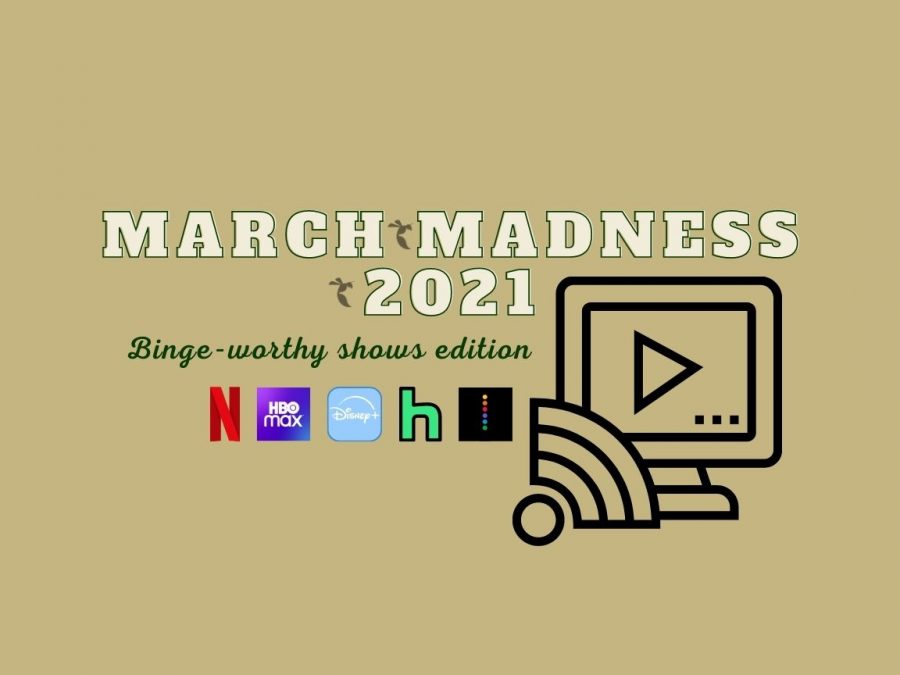 The State Hornet’s 2021 March Madness picks for most binge-worthy TV shows. Categories were made up from streaming services like Netflix, HBO Max, Disney+ and more. Graphic made in Canva.

We’ve been trapped in our houses for almost a year now with nothing but time on our hands. Throughout quarantine, some people sparked their inner creativity and have taken up knitting, baking and writing. But let’s be honest, most of us have spent all our time watching every possible show we can to forget about the inevitable gloom this pandemic has brought.

The State Hornet has curated a list of the most binge-worthy TV shows and separated them into a March Madness-style bracket based on the different services they stream on. “Binge-worthy” is the key term here, while some newer shows made the cut, we tried to focus on ones that are considered truly classic and have plenty of seasons to entertain you for a long period of time. As a way to reward the most bingeable shows that have truly stood the test of time, we made sure that shows with less than three seasons were seeded lower in the bracket.

Below is our list of the most binge-worthy shows to watch, how you can follow along and where to vote for your favorites.
The Bracket

Make sure to download the bracket and fill it out with your picks as we move through the different matchups each week!
How to vote
Voting will be available one day for each matchup on our Instagram (@statehornet) and two days on our Twitter page (@TheStateHornet) starting Wednesday, March 10. You can vote for all the quarterfinals matchups in the Google form at this link or below.
The Schedule
Sign up for our newsletter to get reminders on the updated bracket every week until the final results.
Finals matchup
Wednesday, April 8

Avatar vs. The Office

Kim Possible vs. The Office

Miscellaneous: The Office vs. Parks and Recreation

HBO Max: Friends vs. The Sopranos

Disney+: The Mandalorian vs. Kim Possible

Miscellaneous: Parks and Recreation vs. Atlanta

HBO Max: Batman: The Animated Series vs. Rick and Morty

Disney+: The Proud Family vs. Wandavision

Miscellaneous: The Office (Peacock) vs. The Handmaid’s Tale

HBO Max: Game of Thrones vs. Batman: The Animated Series

Disney+: The Simpsons vs. The Mandalorian

Miscellaneous: The Office (Peacock) vs. This is Us (Hulu)

Miscellaneous: The Bachelor(ette) vs. Atlanta

HBO Max: The Wire vs. The Sopranos

Disney+: The Proud Family vs. Star Wars: The Clone Wars

Miscellaneous: Parks and Recreation vs. Attack on Titan

Miscellaneous: Snowfall vs. The Handmaid’s Tale

First Round Results: Thursday, March 18
Online voting
On mobile or being asked to sign in? You can also vote at this link.