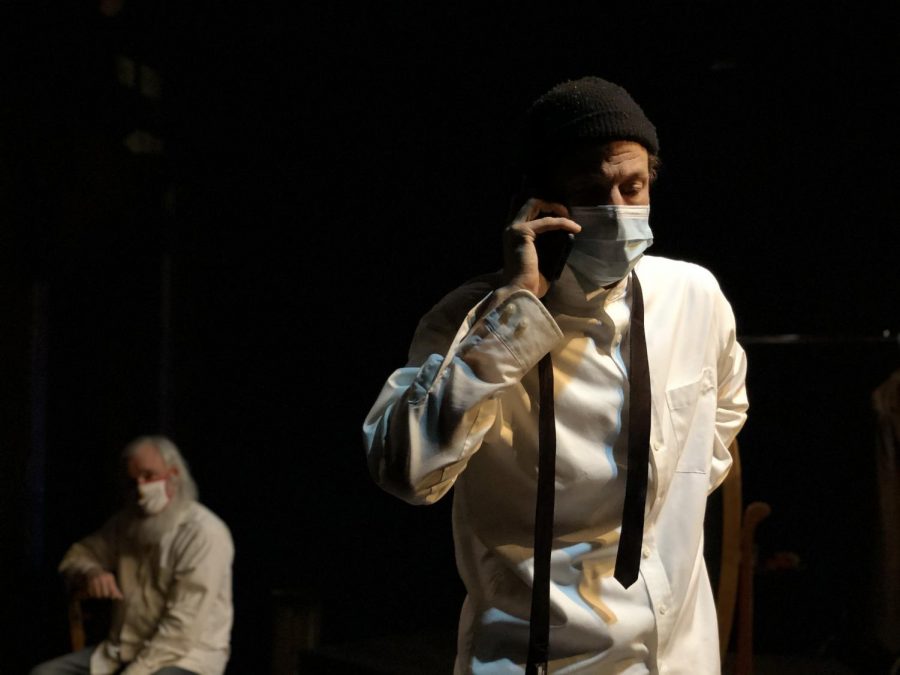 Eason Donner (right) plays John as he struggles to cope with the death of his father figure Amos, played by Gregory Smith (left), in “Gone but Not Forgotten” in rehearsal at Ooley Theatre on Thursday, March 18, 2021. The short, one-act play was written by Scott Charles, a published author based in Sacramento.

The lights are turned low in the small auditorium. The usual bustle from an audience of 35 is absent and replaced by dead silence.

The lights fade to black.

The pre-show message from the director has been pre-recorded.

The lights go up, and the ensuing performance has a limited cast of two. They are maskless and must stay 6 feet apart during the entire show.

It ends. There is no applause.

This is how the show must go on during a pandemic.

Elise Marie Hodge, founder and executive creative director of EMH Productions at The Ooley Theatre on 28th and T Street, is adjusting to the new format because that means she can showcase her latest theater collection “Matters of Life and Death” this Friday and Saturday.

Her audience will be watching from home. The company has spent the last year reworking the space to accommodate for live-streaming. This includes masked rehearsals and deep cleaning of areas with heavy traffic.

The accommodations also include a setup of three AIDA Imaging full HD broadcast pan-tilt-zoom cameras, which Hodge, director of the upcoming production, says “has given our previous shows an old-school, live TV element.”

“After all, the original TV shows were truly just live performances coming direct to us in our homes,” Hodge said.

Hodge graduated from Sac State in 1997 with a Bachelor of Arts in interior design. Originally from San Bernardino, she said she moved back after college to work as a model in Los Angeles. This led her to get involved with small theater companies acting, producing and eventually set designing, where she fell in love with the industry.

As active as she was in Southern California, she said she would fly back to Sacramento on the weekends because she was so fond of the city.

“I see potential in Sacramento,” she said. “I have long wanted to provide an avenue for students to come into the community to work in the arts. They can see there are opportunities here to take a next step with their careers.”

The first show in her upcoming collection is called “Gone but Not Forgotten,” written by Scott Charles, who said he also settled down in Sacramento after living in Michigan, Florida and South Carolina throughout the ‘70s and ‘80s.

“I think local theater is important and reflective of our cultural values,” Charles said. “I think it’s important for all human beings everywhere to see their culture reflected in front of them and to make an evaluation about whether that is who they are.”

His short, one-act play follows the character of John as he faces the passing of his mentor Amos and struggles to say goodbye.

According to members of the cast, “Gone but Not Forgotten” is an excellent reflection of the human connection wrought from COVID-19.

“Death touches us all sooner or later,” said Gregory Smith, who plays Amos. “I think people get caught up in the routines of life and forget to notice those who we love and care about.”

Eason Donner plays John. He said he is using the play as a vessel of healing.

“I have very little experience with death, and I probably did not handle it as healthy as John does.” Donner said. “It is a cathartic experience, a parable of a healthy process.”

The performance streams Friday, Mar. 26 and Saturday, Mar. 27 at 7 p.m. Tickets cost $8.50 and are available via the website ShowTix4U.