Softball takes on a Pac-12 powerhouse 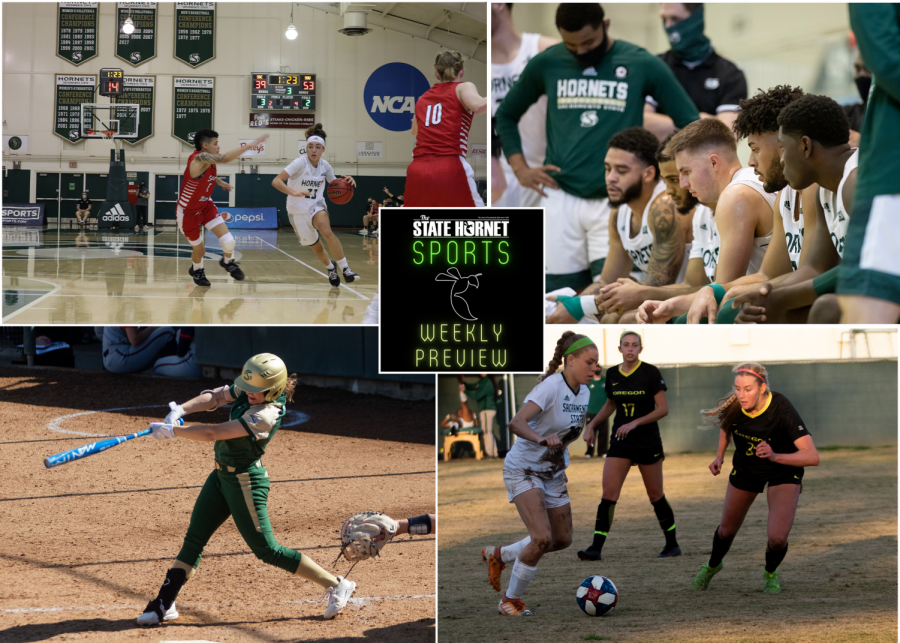 What to watch for this week in Hornet Sports. The baseball team faces Tarleton State in hope of bouncing back from last week’s loss, and the women’s volleyball team hopes to stay undefeated on its homecourt against Portland State. Graphic by Max Connor

Look out for these five matchups in Hornet sports this week.
Softball team looks for an upset win against the Oregon Ducks
Sac State will be traveling to the University of Oregon to face the Ducks this Saturday at 1 p.m.

The Hornets (6-11) look forward to bouncing back from an 8-1 blow-out loss to the University of the Pacific. They will face the Oregon Ducks (13-1), who are fresh off of a 16-0 victory against Portland State Sunday.

In their last game against Pac-12 opponent Cal, the Hornets won in a 3-0 shutout, giving them their third win of the season.

Sac State will travel to Oregon hoping to get its first road win of the season. As of right now, they are 0-5 on the road.

The game will be streamed live on the Pac-12 Network.

Hornet baseball team heads to Texas for a 4-game series
Sac State will face Tarleton State on Friday at 12 p.m. in Stephenville, Texas as they prepare to bounce back from Sunday’s loss to Santa Clara.

The Hornets (7-4) come into this series having won three of their last five games and splitting a four-game series against Santa Clara. The Texans (6-8) come into this game looking to stay undefeated at home with a current 4-0 record when playing on their home diamond.

The Hornets will be depending on another strong performance from freshman second baseman Jorge Bojorquez, who has recorded 7 RBIs in the past two games.

Men’s tennis team looks to keep the ball rolling in Golden State Invitational
The Hornets intend to keep their win streak going after getting their second win of the season against St. Mary’s.

A huge win from Sac state senior Hermont Legaspi against the 23rd ranked player in Division I and a win from freshman Mark Keki propelled the Hornets (2-5) into the right direction as they walk into Friday’s game with a chance to sweep St. Mary’s (1-5) in a two-game series.

Legaspi was named the Big Sky Conference Men’s Tennis Player of the Week after helping the Hornets in their 4-3 home win over Saint Mary’s last week.

The Hornets look to repeat the outcome of Friday’s game to get their season back on track as they enter the second half of their season.

Sac State (7-5) comes into Friday’s matchup winning all six of its games on its home court, two of those wins coming against Eastern Washington this past weekend. Portland State (3-11) will be looking to get its first win on the road as the team comes off back-to-back wins against Montana University.

Caitlin Volkmann will look to continue her strong start to the season for the Hornets after coming off the last game against Eastern Washington with 12 kills and 5 digs.

This season, the Hornets (0-8) have scored a total of three points in eight contests going into Friday’s matchup. As a team, Sac State has been outscored by at least 5 points or more in every contest besides its matchup against Fresno State, where they lost 5-2.

Both Santa Clara (2-2) and Sac State look to turn things around after slow starts to the season.