'We do not stay quiet in a time of abuse' 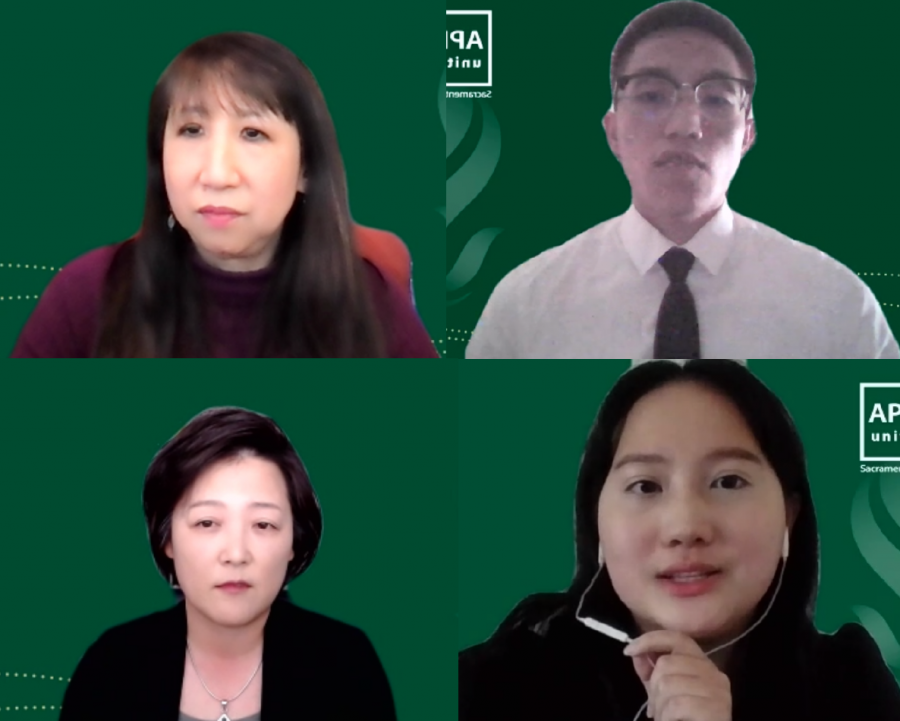 Jeannie Wong, senior associate vice president of university communications at Sacramento State, reminisces about her first day of kindergarten. Holding onto her mother’s hand, she is surrounded by a classroom she calls magical, surrounded by bright colors and giant alphabet letters. A place of promise, learning, and opportunity, she said.

On that day, a little boy walked up to her and called her a racial slur, slanting his eye with his fingers, mocking her Asian heritage. While it was a long time ago, said Wong, situations like these continue, such as in February when a teacher at Union High School did the same offensive gesture during class.

Wong says nothing has changed in America for the AAPI community.

In the wake of recent attacks on the Asian American and Pacific Islander community in the United States, the Sac State AAPI community shared their experiences with racism and hate during a virtual safe space gathering on March 30.

This event comes in response to the mass shooting in Atlanta on March 16, where eight people were shot and killed, including six Asian women. The increase in hate crimes targeting Asian American and Pacific Islanders also provoked concern during the discussion.

“It [what happened in Atlanta] is the direct descendant of the hypersexualization, objectification of Asian women rooted in American imperialism and empire building in Asia, Southeast Asia, and the Pacific Islands,” said Winnie Hung, lecturer of Asian American studies at Sac State. “These women were murdered in cold, premeditated blood during the even colder, brighter light of everyday life in America.”

Chi Vang, a criminal justice major at Sac State, said that at the age of 3, his family came to the United States from Thailand seeking refuge, believing they would have a better life in the U.S. Despite this, he said Asian Americans and other people of color are still targets of violence.

“I see that our sisters, moms, dads, brothers, our families and friends are continuing to be victimized,” he said. “We do not stay quiet in a time of abuse.”

The direct targeting of older Asian Americans and Pacific Islanders has concerned members of the AAPI community at Sac State about how to protect their grandparents, mothers, and fathers.

“My parents would often remind my siblings and I to be careful when we head out to play with our friends in the community,” said Chao Vang, who works in Sac State’s Student Academic Success & Educational Equity Programs. “Now, the role has reversed. There’s something fundamentally wrong about this.”

Yee Thao, an anthropology major at Sac State, said her mother is a symbol of strength and her own personal savior. Now with the increasing attacks, Thao is scared for her and her mother’s safety, which she says is unfamiliar.

“As an Asian woman, I am deeply affected and devastated by the social and systemic violence that we still continue to wrongfully face today,” Thao said. “I’ve witnessed racial microaggressions embedded within our everyday speech, the silencing of our voices, and the constant dismissal of our grief by the media and the general public, trying to invalidate our visibility.”

Wong expressed a similar concern that her own mother will be attacked, even on the way to the grocery store.

“I am wracked with fear and worry that she goes to the market, all 5-foot-1 of her, that she will be attacked as she’s buying a bag of apples,” Wong said.

Seunghee Wie, professor of family and consumer sciences, said the shooting in Atlanta was personal to her as a Korean woman. She said in order for the AAPI community at Sac State to heal, the university must include Asian Americans and Pacific Islanders in community conversations and support the Asian Pacific Islander Desi American Faculty Association, where she is associate vice president.

“If you are surprised by the anti-Asian violence in Atlanta, Georgia, that happened two weeks ago, you haven’t been listening to us,” Wie said.

Associated Students, Inc. is currently working on three action items aiming to build support systems and safe spaces for the California State University system, according to Vice President of Finance Prabhjyot Shinh. She said ASI is collaborating with more AAPI healing circles and to bring to the board a resolution that further supports AAPI students and staff.

In response to the attacks, Sac State President Robert Nelsen said the time for change is now, and Sac State can be part of that change, especially after events like the shooting in Atlanta.

“It is sad, it is horrific. And it has to stop,” Nelsen said. “Today is a chance for us to examine where we’re at and be part of the change.”

As Sac State transitions to in-person instruction, Chi Vang said AAPI students are fearful to return to campus. Ed Mills, vice president of student affairs, said that Sac State students and faculty must continue to report anti-Asian incidents that might arise on campus or on social media.

Timothy Fong, professor of Asian American studies at Sac State, said there is a long history of anti-Asian violence, laws, and policies in America.

Fong discussed the California court case People vs. Hall, which ruled in 1854 that a Chinese man could not testify against a white man in court, a decision that later also barred Native American and Black Americans from testifying. Other cases Fong discussed were the Chinese Exclusion Act of 1882 and the Immigration Law of 1917, which barred Chinese and other Asians from entering the United States.

While these policies were initiated years ago, Fong said the violence hasn’t stopped, especially in the Sacramento area.

Fong shared examples of violence in the Sacramento area, including a sushi restaurant in Elk Grove that was vandalized in a racist attack last December. He also mentioned Asian American and Pacific Islander students from Rocklin High school receiving racist attacks over social media.

He also recounted the Cleveland Elementary School shooting in Stockton, where five elementary school students were killed and 30 others, including one teacher, were injured. The students killed were all Vietnamese or Cambodian, the youngest of which was 6 years old. Another case he mentioned was one from 2011, where two Sikh men were shot and killed in Elk Grove. This case remains unsolved.

To implement institutional change for members of the AAPI community at Sac State, Fong proposed institutional audits; the full implementation of AB 1460, which requires an ethnic studies class as a graduation requirement; policy revisions; support for funding and hiring new faculty.