Softball team opens the season 1-1 in a doubleheader 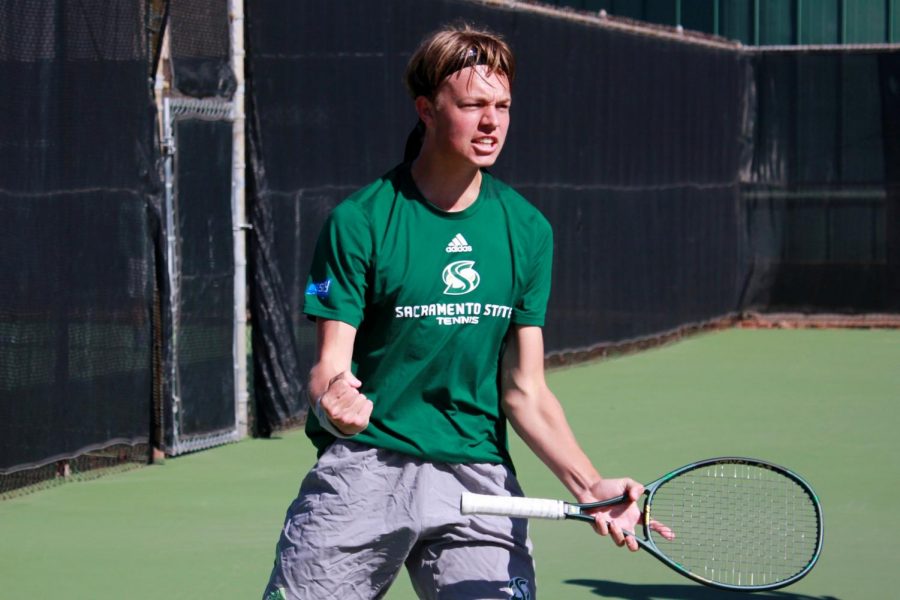 Freshman Liam Liles celebrates after scoring in the first set of his doubles matchup at the campus tennis courts Friday, Feb. 12. The Hornets fell to the Mustangs 4-0.

Jordan Latimore
In this story:

With freshman Mark Keki sidelined with an ankle sprain among other injuries on the team, the undermanned Hornets (0-2, 0-0 Big Sky) had trouble duplicating their success from their last outing in the doubles set against the Mustangs (3-2, 0-0 Big West). Losing all three sets with scores of 6-2, 6-4, and 6-2, the Hornets struggled to find a rhythm against an experienced Mustang team.

“We didn’t get our serves and we didn’t hold them,” freshman Rudolfs Aksenoks said. “We have a young team, I think if we all build up on the experience and most importantly learn from these matches, then we’ll be able to proceed and play better in the future.”

In singles, the Hornets were dominated by the Mustangs and were only able to capture one set.

“I think for us, the number one thing right now is to get rid of the injuries,” assistant coach Mikus Losbergs said. “The guys were pretty tired on the first serve, and you know, if you’re not really physically ready to do that for two or three hours, it’s just gonna be a hard of you to go for it.”

The Hornets will host the University of Nevada Thursday at 1 p.m. PST.

The Hornets’ softball team went 1-1 in their doubleheader against the Lancers on Friday in a highly competitive two-game series.

In game one, the Hornets found success from their starting pitcher Marissa Bertuccio, who limited the Lancers to only four hits and struck out seven hitters.

“Marissa really set the tone early in the game and did a great job of getting ahead of batters,” said head coach Lori Perez. “It really felt like she got stronger as the game went on, which is really key and a testament to her, especially at this time of year.”

The first game saw a solid offensive performance for the Hornets. They finished the game with 4 doubles, which in large part contributed to their 3 runs to seal off the win 3-1.

Sophomore Lewa Day, third base and outfield, ended the day with 2 RBIs and a double in the first game and a home run in the second. She credits her team’s cheers for helping her at bat.

“Without them or hearing them cheer for me when I’m up to bat, it helps me a lot more than just being silent,” Day said. “So I couldn’t have done it by myself.”

@ambernichole071 Batting for Hornets in the second inning. Score is even with no runs. @SH_Sports pic.twitter.com/eehZnjiy8J

In game two, the Hornets found themselves struggling to set the tone on defense, despite still seeing success at bat. Day’s 5th inning home run to put the Hornets up 3-1 wasn’t enough to combat an eventual 7-run inning from the Lancers that was met with no Sac State response.

“Putting together quality at bats, those really domino together, whether that’s in a negative way or in a positive way, that’s going to be really key,” Perez said. “We got to communicate better and we got to take care of the ball better.”

St. Mary’s defeated Sac State in doubles in the first two matches with scores of 6-3 and 6-2, giving them a momentous 1-0 lead going into singles.

With only one singles matchup going to three sets for the Hornets, Sac State had trouble finding any stride to get themselves back in the match.

The only player to extend her singles match to three sets, redshirt sophomore Shauna Casey lost her match in a close 10-4 third set after she won her first set 6-4 and lost her second 6-1.

Sac State’s next match will be against San Jose State on Friday at 1 p.m. PST.