Student is no longer enrolled 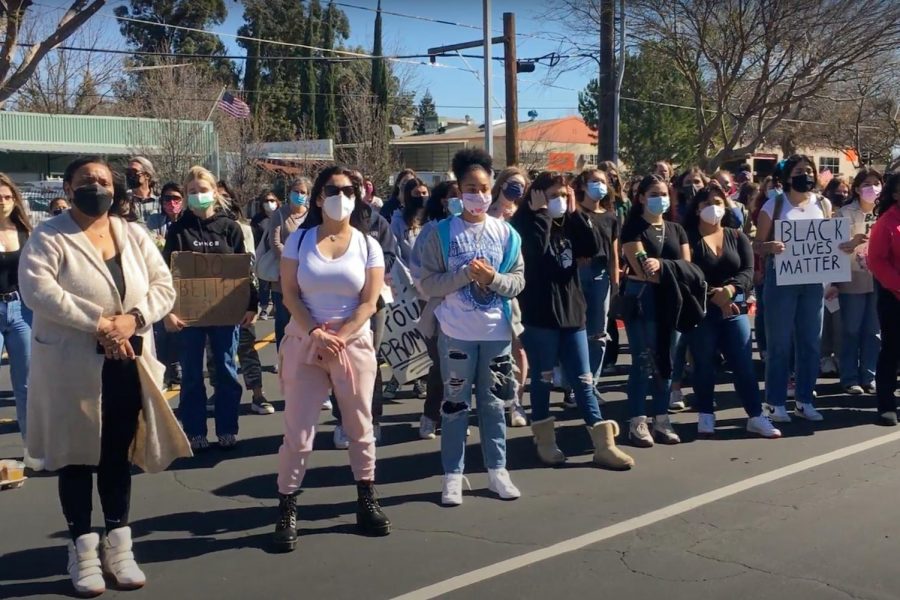 Students, parents, and alumni of St. Francis High School gather in protest on Wednesday Feb 24, 2021 against the school's retention of a student who recently shared a photo of herself wearing blackface on Snapchat. As of Wednesday, the student is no longer attending the all-women's Catholic high school.

St. Francis students, alumni and Sacramento leaders protested the usage of blackface by a former white student impersonating a Black classmate on social media on Wednesday.

The United for Change protest hosted by the St. Francis Black parent group, Black alumni and Black students rallied to support their daughters and peers against racism, mental and physical trauma according to their event flyer.

“There’s been many incidents at our school involving racism,” said Zoraya Phillips, senior at St. Francis. “Students, specifically doing blackface and other things that are hurting the Black community, and our school does nothing to give repercussions to the students.”

St. Francis High School said in a press release that the student caught with blackface is no longer a student at the school according to an article by ABC 10 following the protest.

“The Black Student Union and the Black parents have asked for this student to have repercussions and they [St. Francis administration] just said no,” Phillips said during the protest. “They said they are not going to get the student in trouble and that they can’t do anything for it. We’ve also asked them to put this blackface on the no-tolerance list and they also said no.”

The protest took place in front of the school which is located on Elvas Ave. right behind Sacramento State’s campus.

Sacramento Vice Mayor Jeff Harris said that the St. Francis’ administration told him they are in the process of change, that they have a racial reconciliation plan and that they have held listening sessions.

“When I see a sign like ‘the students need protection,’ that is not okay,” Harris said in his speech to the protesters. “Students’ lives matter. So, to the administration here, I say put your money where your mouth is.”

Sania Stewart, a junior at St. Francis who is part of the Black Student Union and Racial Justice League said the school has a history of ignoring issues of racial discrimination.

“Consistently, over and over again, St. Francis has decided to ignore these issues, put us down and always worry about the comfort-ability of white students instead of their students of color,” Stewart said.

Stewart said it’s not just the harm of other students but of those in power who don’t protect the students under their care.

“It’s quite aggravating to see those who are supposed to support you at your own school just completely neglect you.”