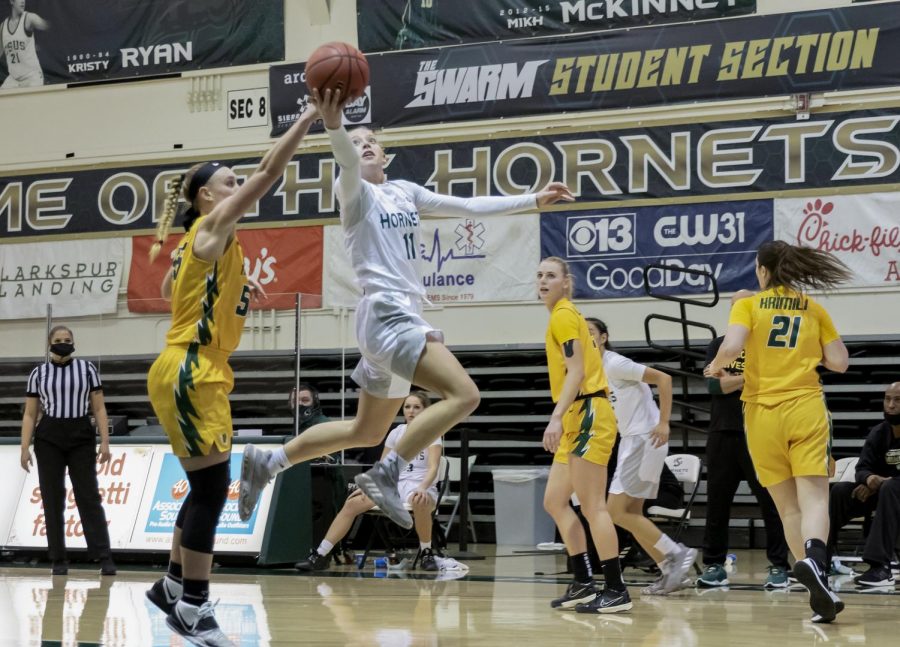 Sacramento State’s Summer Menke (11) attempts a layup past University of San Francisco’s Abby Rathbun (55) during the fourth quarter in the game at the Nest at Sac State Tuesday, Dec. 22, 2020. The Hornets played Northern Arizona University Saturday and Menke had 12 points and nine rebounds but Sac State lost and moved to 1-14,1-11 Big Sky.

The Sacramento State women’s basketball team led by eight points with three minutes left in the game but let Northern Arizona University get away with the victory after a game-winning layup with 1.3 seconds left, Saturday at the Rolle Activity Center.

The Hornets started the game with a made 3-pointer by junior guard Summer Menke and made a constant effort to get back in transition on defense, which caused a scoring drought of nearly three minutes for the Lumberjacks. The score was tied at 13 at the end of the first quarter after a driving floater by Sac State junior guard Jazzy Carrasco.

Sac State junior forward Tiana Johnson started off the second quarter with a right-handed hook layup off the backboard. Johnson started the quarter by being aggressive going on to make her next two buckets.

The Lumberjacks created some separation with a 9-0 run with three minutes left in the second quarter, but the Hornets played scrappy and stayed within striking distance. The Hornets made their last three field goals going into the half, including a jumper from the elbow as the second quarter expired from sophomore guard Jordan Olivares.

Johnson and Olivares led all scorers with 11 points in the first half. Johnson chipped in nine rebounds as well but the Lumberjacks finished the quarter making 10 of their last 12 shots to end the half.

Tiana Johnson has 11 points and 9 rebounds. Jordan Olivares sinks a mid-range shot at the buzzer going into the second half. @SH_Sports

The Lumberjacks fought back to cut the Hornet’s lead to four points heading into the fourth quarter. Carrasco made 3-4 3-pointers scoring nine points and the Hornets shot 60% from the 3-point arc in the third quarter.

@SacStateWBB leads @NAU_WBB 58-54 at the end of the 3rd quarter. Jazzy Carrasco scores nine points in the quarter with 3-4 shooting from the 3-point arc. @SH_Sports

After a timeout, Menke scored a layup off an offensive rebound to give the Hornets a one-point lead with 1.3 seconds left.

Needing one defensive stop, the Hornets allowed senior forward Khiarica Rasheed to score a game-winning layup and the Lumberjacks snuck away with the victory.

The Hornets’ leading scorer was Johnson with 17 points and 13 rebounds. The eye-popping stat line in the matchup was in 3-point shooting: The Hornets were 11 of 25 from the 3-point arc  while the Lumberjacks were just 6 of 25, yet the Hornets still lost due to 24 turnovers.