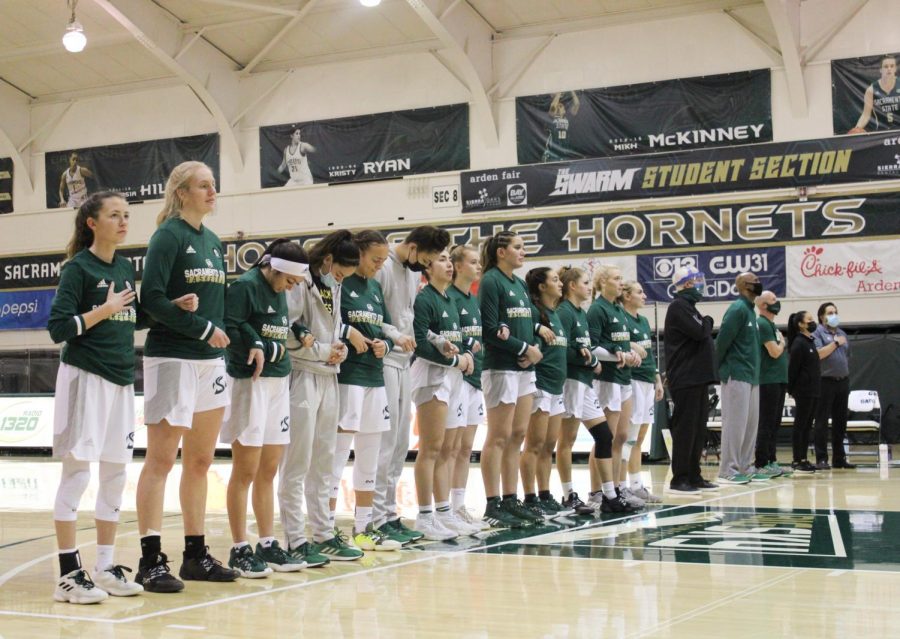 Sac State women's basketball team lined up together, interlocking arms during the national anthem on Jan. 28, 2021. The Hornets are 1-13 overall and 1-9 in the Big Sky conference.

The 2020-2021 season has not gone the way that anyone on the Sacramento State women’s basketball team wanted, having started the season 1-14 overall and 1-11 in the Big Sky.

With eight games left on the season the Hornets have sealed their fate of a sixth-straight losing season.

The Hornets came into the season with a lot of questions up in the air including whether there would even be a season with the pandemic still raging. However, the Big Sky conference got  approval to start with no fans in attendance and a new system of daily activity for the players such as having limited time being all together on the court and consistent COVID-19 testing.

Before the season started junior forward Tiana Johnson said this is a year where “the goal is to unite as one.” That was a good mindset to have especially with nine returning players and seven new players, five of them being freshmen.

The Hornets started off the season just the way a pandemic season would start, with the first game of the year versus William Jessup being canceled due to COVID-19 complications.

This was a sign of what was to come as they have had two additional games cancelled to this point in the season.

The Hornets opened the season with only eight players, leading to a rough opening weekend road trip against Idaho.

The Hornets entered the next weekend’s two home opener games  against Nevada with just seven active players and only six players ready to suit up by the end of the weekend.

“We had a different roster literally every game of this season,” Harkleroad said. “The bright spot is we are right there.”

The inconsistency of the number of players active on the roster was part of what led to an 11 game skid to start the year. There are other variables for their losses this season from running out of gas on both sides of the ball, poor rebounding efforts, lack of assists, high volume in turnovers and even poor shooting nights.

“It was tough,” said junior guard Summer Menke. “This was probably my first time being in a season like this and it makes you kind of stronger and makes you appreciate the win more and the hustle more.”

Menke added that the team has struggled to play a complete game this season.

“We had trouble having a solid four quarters of good basketball,” she said. “We need to be consistent and push through and win.”

The Hornets have not had a lack of effort and will power to fight to the end of each game as demonstrated with four of their losses being in the single digits with one overtime game.

Menke leads the team with six double-doubles on the season. She also leads the Hornets in both scoring and rebounding, averaging 14.7 points and 8.0 rebounds per game on 44.2% shooting. Menke was awarded the Big Sky Player of the Week on Feb. 1 after averaging in the previous week, 19 points, 10.5 rebounds and 3.5 steals per game.

The Hornets finally snapped the losing streak in a game against Eastern Washington where junior guard Jazmin Carrasco got hot from 3-point land and scored a career-high 26 points. Carrasco had been hot shooting also setting career highs the previous two games.

“It makes me hungry,” Menke said after getting the first win. “It was really relieving and everyone was super hyped up and a great feeling.”

Sophomore guard Sarah Abney said the win was proof of what their team was capable of.

”It showed our offense can get hot at any time,” Abney said. “But I think our defense was really good Thursday so it spoke to everybody that we can stop anybody in the conference and we can be the best defensive team in the conference if we all do our job and put it together.”

That one win may have released some pressure but Harkleroad said the team still had work to do and the Hornets have struggled, dropping three more games in a row since the win.

“We better be hungry,” Harkleroad said. “We need to focus up and make sure we are ready to keep battling.”