Hornets lose 3-0 in both matches 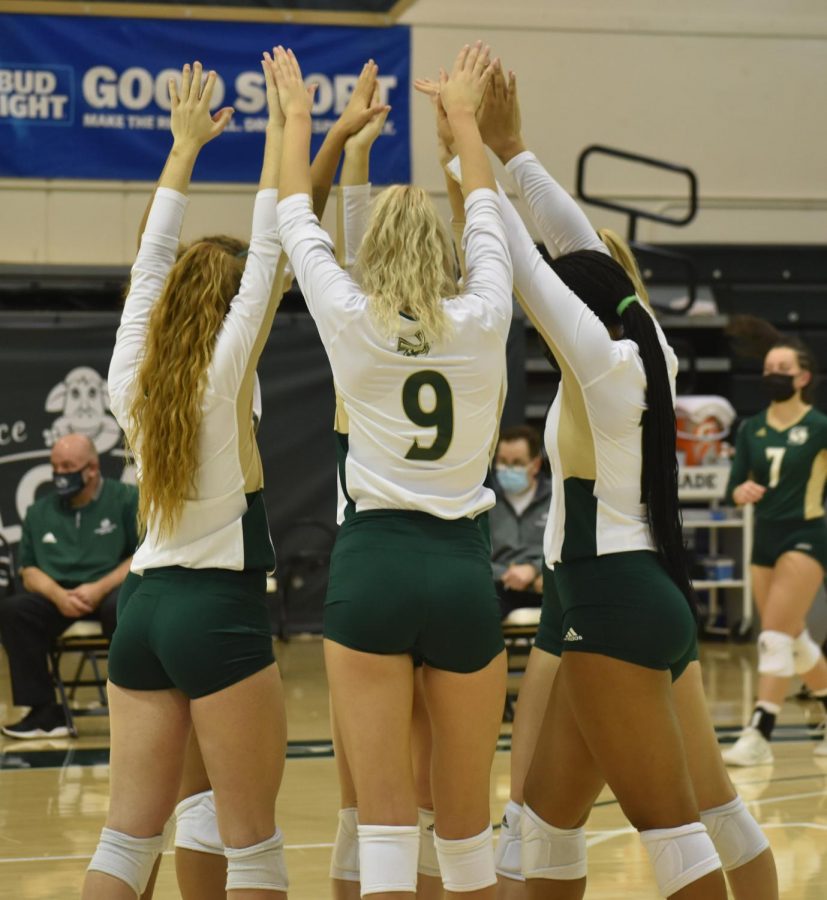 Karlee Soderberg (center), hitter for Sac State Volleyball, breaks with her team for the opening home game against Idaho State at the Nest at Sac State Saturday, Jan. 30, 2021. The Hornets lost in back-to-back matches against the University of Northern Colorado in six straight sets on Feb. 7 and 8 at Bank of Colorado arena.

The Hornets (3-3, 3-3 Big Sky) dropped all three sets of each match in what could be described as a blowout by the Bears (5-1, 5-1 Big Sky).
The Bears out-serve the Hornets in the series opener
The Bears got a quick kill by UNC sophomore outside hitter Rachel Hickman, but Sac State was able to get it to 1-1 after a bad set from Hickman.

The Hornets struggled to get into a rhythm and gave some points to the Bears with seven attack errors and eventually lost the first set 25-8.

The Hornets played better in the second set. They still had six errors but had eight kills to the Bears’ 10, an improvement from the first set where the Bears dominated in kills 13-5.

The Hornets didn’t have an answer to the Bears’ serving. UNC had six of its 11 service aces in the second set.

The Bears continued to outplay the Hornets in the third set, causing the Hornets to call a timeout after a service ace from the Bears’ senior setter Daisy Schultz.

Even with good play from Smith and freshman outside hitter Caitlin Volkman, who had five kills for the game, the Hornets lost the third set 25-17.

The Hornets also saw good play from junior setter Ashtin Olin, who had 11 assists and sophomore setter McKenna Smith, who had seven assists.

The Hornets were unable to get any consistency going throughout the match and didn’t see the same level of serving they were used to seeing with only one service ace for the game.
The Hornets drop six straight sets for a series sweep
The Hornets’ woes continued Monday, losing another match 3-0.

The Hornets struck first with a kill from junior middle blocker Sarah Falk, but the Bears went on a four-point run until a service error by the Bears’ junior defensive specialist Kyndall Feather putting the score at 4-2.

The Bears looked to bring the same aggressive play that they brought to Sunday’s match, and the Hornets did not have an answer in the first set, even with the return of senior outside hitter Macey Hayden, who was out with an injury the first game.

The Hornets lost the first set 25-11 after a kill from the Bears’ junior outside hitter Kailey Jo Ince.

In the second set, the Hornets were able to limit the Bears to nine kills compared to the 13 they hadt in the first, while getting eight kills of their own.

The Hornets’ freshman outside hitter Caitlin Volkmann led the way with three of her six kills in the second set.

Even though the Hornets were able to limit the Bears’ kills, they still had no answer for their serving, with the Bears getting four more service aces to the Hornets’ one for the game. Sac State lost the second set 25-17, putting them down 2-0 in the match.

The Bears looked as dominant in the third set as they did in the first, opening up the set with a kill from sophomore outside hitter Makenzie Harris, who had five kills for the game.

The Hornets still did not have an answer for the Bears, who had 13 kills and two service aces in the third set. The Bears were led by senior outside hitter Taylor Muff who had 12 kills and three service aces for the game.

The Hornets got eight kills, two of which came from Volkmann. The other six came from multiple Hornets, including Hayden who had one of her three in the third set.

The Hornets looked good on offense with a balanced attack but just could not get it together on defense, which caused them to lose the third set 25-18. They also had no answer for Muff who alone had more service aces than the Hornets.