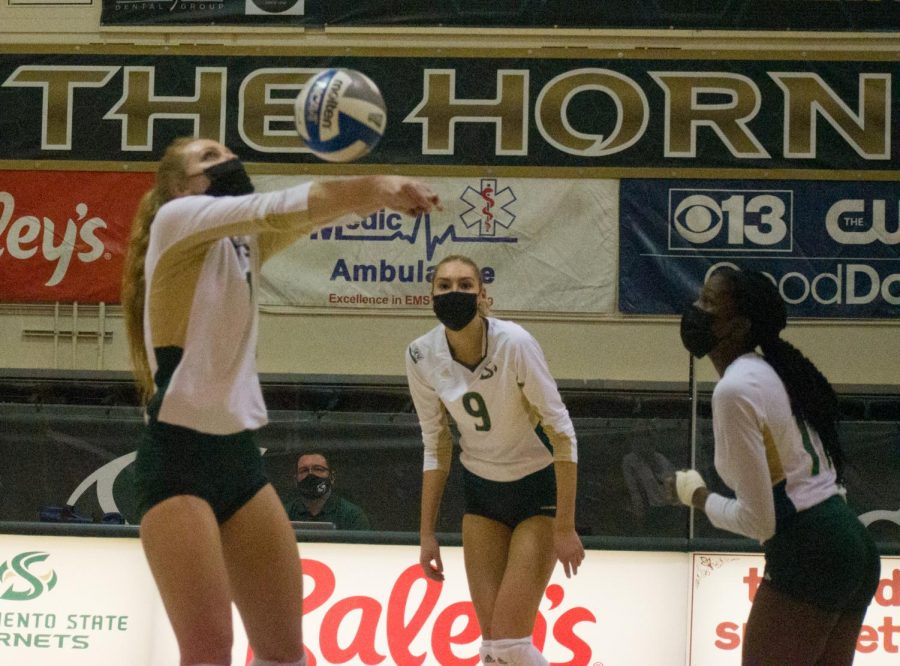 Photo Caption: McKenna Smith sets up for an attack during the home opening Sac State volleyball game Jan. 31, 2021 at the Nest. Volleyball teams, including Sac State's, are allowed to test for COVID-19 only once per week if masks are worn during practice and competition.

If you have tuned into Pluto TV to watch Sacramento State sports this year, you may have noticed that the basketball teams play maskless in their empty cavernous gyms, while the volleyball team continues to wear masks during their competitions.

Big Sky Conference compliance commissioner Jaynee Nadolski explained that “high transmission risk” sports, such as volleyball and basketball, are required to test for COVID-19 three times per week by default. However volleyball teams, including Sac State’s, are allowed to be classified as “intermediate transmission risk” and instead test only once per week if masks are worn during practice and competition.

Teams in sports such as basketball are not given this option, however, due to the physical contact between teams, according to Nadolski. Volleyball has the two teams separated by the net.

Sac State athletics assistant communications director Ryan Bjork confirmed that the ruling was decided by the Big Sky Conference after taking input from coaches and teams.

“It comes down to the number of times the teams are required to test per week and what types of tests they take,” head volleyball coach Ruben Volta said. “The volleyball group, months and months ago, we decided that we would wear masks and have to test less often.”

Senior outside hitter Macey Hayden said that in addition to the weekly testing, the team gets tested another time if they travel.

Assistant volleyball coach Ed Jackson said the testing is usually on Wednesdays and a few days before departing for a road game.

“There’s a whole list of rules and protocols that are set in place that the Big Sky Conference have put together to make sure that everybody is safe during travel, so that’s what we do,” Jackson said. “Sometimes we have to test more frequently, but for the most part it’s on a weekly basis.”

Volta said he believes that wearing masks in competition is necessary.

“At first I think it’s kind of a pain in the neck for the players, but I think they’ve gotten a little bit used to it,” Volta said. “I think it’s helped a little bit because I’m seeing a lot of sports cancelling games here and there.”

Jackson said the mask requirements affect him because he does drills with the team but has to wear the masks so often that he tends to forget he has a mask on.

“The big challenge for us was just learning which masks were great for being allowed to breathe, because obviously when you’re exercising you’re going to breathe pretty heavily,” Jackson said. “Personally that was the biggest challenge for me because I’m out there involved in activities and running drills.”

Hayden said that the players accept having to wear masks.

“Honestly for me wearing masks is a small price to pay for being able to play, and a lot of the women on my team feel the same way,” Hayden said via text. “If wearing a mask is what we have to do to compete, we’ll do it.”