OPINION: Can advertisements be added to video games without ruining immersion? 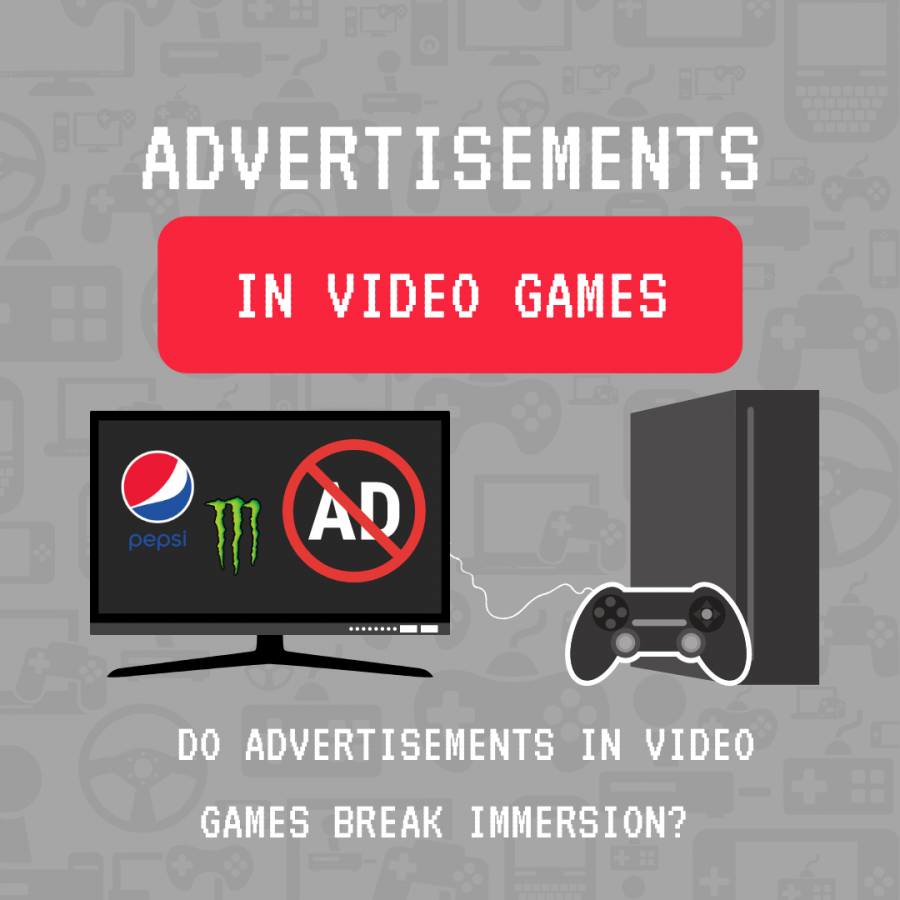 Companies like Pepsi or Monster have always found novel ways to advertise in video games, but do these advertisements break player immersion? Opinion writer Shelby Tolly talked to Sac State students to get their views on product placement in video games. Graphic by Hannah Quijas.

Advertisements in video games isn’t a new subject, but it’s one that continuously divides gamers.

The earliest advertisement in video games that I recall is the Pepsiman video game. Pepsiman, released in 1999 for the PlayStation, was about the titular superhero mascot created by PepsiCo Japan and had videos before each stage showing a man drinking Pepsi. The whole game was an advertisement and it got away with it — even becoming a meme, according to CBR.

Though Pepsiman is meme-worthy, there are advertisements that don’t come off as great to gamers. A recent example of an advertisement in games that didn’t go over well is the incident surrounding NBA 2K21 in October 2020. NBA 2K21 had unskippable ads during 2KTV – a video segment that appeared on what would normally be a loading screen.

Forbes mentioned this was a major issue with gamers, “who don’t believe they should have to watch any ad within a game they’ve already paid up $100 to purchase initially, and many of them have spent far more with microtransactions.”

Microtransactions are extra purchases you make in a video game after the original purchase of the video game itself. I don’t play the NBA 2K series, but when I mentioned the story to my fiance, he immediately had a look of disgust at the memory.

“They can either work or fail depending on [sic.] game and it’s sales,” said Andro Palting, a  Sacramento State photography major, via Instagram about in-game advertisements.

Which is true, like Monster brand energy drinks in the game Death Stranding, where the main character uses the energy drinks to get a stamina boost. The product placement is then useful to the gamer in this regard. But the drink itself is a bit odd in the world of this game.

As Polygon put it, “Death Stranding is a sparsely populated world where branded products are almost non-existent. It is a place of scarcity and need.”

Regarding the NBA 2K example, Nick Palsgaard, a Sac State mechanical engineering major, said via Discord, “2k added unskippable adds [sic.] in an update after the game launched which I think was a bad move… only because the product got affected after they purchased.”

I agree with Palsgaard in that this affects future purchases of the product. This left a bad taste for a lot of gamers and I was one of them. Seeing ads in these games leaves me irritated because I already paid around $70 for the game itself.

While in some subscription services you have to pay extra to not see ads, I go to video games to escape and immerse myself in the curated worlds, and to break that immersion with an ad to promote a tv show — it just leaves me with a bad taste. I would describe that taste as a mixture of disgust and sellout.

Isaac Rodriguez, a computer science major, said through Twitter, “As long as it doesn’t detract from the game, I see no issue, though some in game adverts can be rather… over the top.”

Though I do disagree and believe ads or product placements should stay out of video games, there have been some advertisements in games that don’t break the immersion.

The best example of an advertisement that didn’t break the immersive feel of the game is Nissin’s Cup Noodles in Final Fantasy XV. The world of Final Fantasy XV is a world filled with billboards, fake adverts, and social media. So the in-game placement of Cup Noodles isn’t too unbelievable in this world, unlike in Death Stranding.

There is an entire mission in FFXV that plays around Cup Noodles and the characters can snack on Cup Noodles at any time, giving them boosts — they make this product look so good that my mouth was watering! The product is frequently mentioned in the game, but not too much to where it feels it breaks the immersion.

As long as they work with the game developers in order to make sure the advertisements match the world of that video game, advertisements can still live peacefully within the realm of gaming.