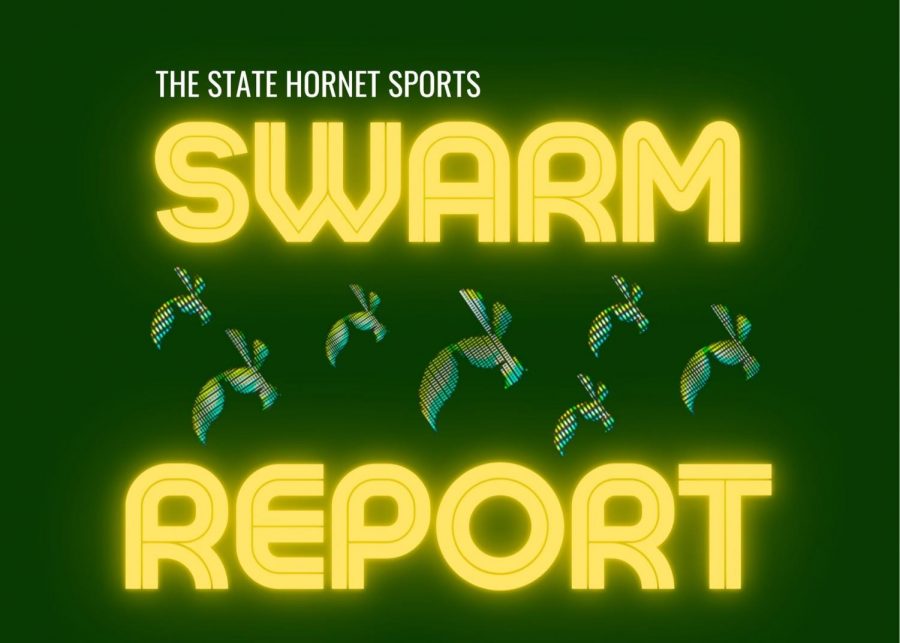 Each day The State Hornet will recap all the action from the day of sports at Sacramento State. Sunday Sac State baseball dropped the rubber match of their series to Arizona State and women’s tennis fell to UC Davis, remaining winless. Graphic by Max Connor

The Hornets got the go ahead runner on base in the ninth but were unable to repeat their ninth inning magic from Friday when catcher Dawsen Bacho hit a grand slam to give the Hornets a 4-2 lead and an Opening Day win.

Junior Travis Adams started for the Hornets going 4 ⅓ innings giving up 7 hits and 2 runs while junior Jack Zalasky and sophomore Rylan Tinsley combined to shut down the Sun Devils the rest of the way.

The Hornets offense struggled to push runs across leaving 9 runners on base. The only run came from an opposite field home run from senior utility player Dylan McPhillips in the 4th inning.

The Hornets will face the Sun Devils one more time Sunday at 11:35 a.m. looking to take the rubber match of the series.
Sac State softball team shuts down Cal 3-0 on Saturday
The Hornets (3-5) were held scoreless until the fourth inning when designated hitter Carley Morfey hit an RBI single. Katie Vretzos, second base, got the scoring started with an RBI sacrifice fly in the bottom of the fifth and was followed by an RBI walk from Morfey.

The Hornets were able to ride a dominant pitching performance from sophomore Marissa Bertuccio who tossed a five shutout innings on 114 pitches. Bertuccio has only allowed six earned runs to go along with 18 strikeouts in her five appearances this season and dropped her season ERA to an impressive 1.52 on Sunday.

Next up the Hornets will play Long Beach State at 12:30 p.m. on Saturday in the first game of the Fresno State Tournament scheduled for the duration of next weekend.

Bertuccio throws a 5-hit shutout to lead the Hornets to a 3-0 home win over Cal. First win over the Bears since 2009. Morfey had a pair of RBIs. Hanson, Day and Robles each scored runs. #StingersUp pic.twitter.com/QsRzEHs8lK

The game was tied at 50 entering the fourth quarter until Enger and junior guard Summer Menke took over, each scoring 8 points in the final quarter to help give the Hornets the seven point victory.

The Hornets will look to maintain momentum when they travel to face a last place Weber State team that is 0-17 on the season.

Run it back! Here are the highlights from today’s 73-66 win over Southern Utah. #StingersUp 🐝🏀 pic.twitter.com/DzlfeXEXXV

Sac State’s core of seniors, Ethan Esposito, Bryce Fowler and Christian Terrell combined to score 43 points but the rest of the roster could only chip in 12 more points.

The Hornets struggled from the 3-point line shooting 3-17.

The game was close going into the half but the Thunderbirds exploded in the second half outscoring the Hornets 42-25.

Grand Canyon secured the doubles point with victories of 6-3, 6-1.