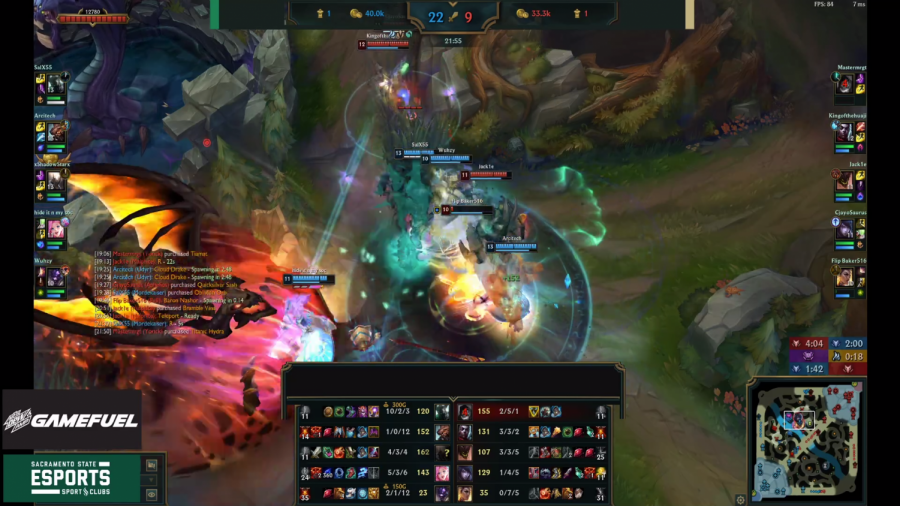 The Sacramento State Hornets League of Legends team engages the Southern Utah University Thunderbirds in a team fight behind the dragon pit in the first game of the series on February 13. Screenshot taken by Michael Pacheco

It was a combination of strong fundamental play and good communication that led the Hornets to success, contrasting to the Thunderbirds’ unorthodox team compositions and positioning issues during critical moments throughout the series.

“I’m feeling pretty good since they were the runner-up to us and we were in first place,” said Sac State’s mid laner Christian “Shadowstar” Archbold. “Taking them down, it bodes well for our future games.”

The Thunderbirds’ draft picks for this series were either binary, only doing one thing with little team synergy, or were comfort picks out of the meta. The Hornets stuck with more traditional team compositions in both games.
The Hornets come out aggressive in game one
The first game began with a unique draft from the Thunderbirds, which included a Yorick top pick and a Malphite mid to contest the Hornet’s Pantheon pick for their mid lane, who drafted an otherwise standard team composition.

The opening minutes started with three kills for the Hornets, transitioning that to the first ocean drake and almost a 2k gold lead for the Hornets at seven minutes, a lead the Thunderbirds never came back from.

All three lanes started to push out, giving the Hornets an opportunity to defeat Baron Nashor at 21 minutes 30 seconds. The Thunderbirds contested the objective, getting aced for only one Hornet in return.

At 26 minutes a mid tower and inhibitor and a bottom tower were taken for zero Hornet deaths, forcing the Thunderbirds to protect bottom and giving the Hornets a free Elder Dragon closing out the game at 30 minutes 19 seconds.

“Due to a lot of good teams dropping out for some unforeseen reasons, I think the general level of competition in the league dropped a little bit, but I don’t think there are truly any ‘bad’ teams,” said Sac State’s marksman Dakar “DvX” George. “I think if we use our momentum well and stay focused on our goal, we should be able to go undefeated in the regular season at the least.”

Dominance continues as Hornets have a better outing in game two
In the second game draft opened with another unorthodox choice, with the Thunderbirds opting into Kayn as a first pick for their jungler and a repeat of the Yorick pick for top. The Hornets responded with repeat picks in Udyr, Alistair and Mordekaiser.

“I blind picked the Orianna, and Corki is just notoriously countered by Orianna, so that’s just, he just picked a losing lane,” Archbold said. “Corki can not do anything versus an Orianna.”

A failed early game tower dive from the Thunderbird’s jungler gave both buffs and first blood to the Hornet’s mid laner, beginning another snowball for the Hornets.

The Hornets attempted the dragon soon after, but the Thunderbird’s jungler came from behind the dragon pit, stealing the dragon from right under the Hornets’ noses and even living to tell the tale.

Another bad dive from Kayn killed two of the Thunderbirds, but a quick follow through killed the Hornets’ mid laner, burning her flash and netting the Thunderbirds’ marksman some shutdown gold, narrowing the gold difference.

The Hornets cracked a further two towers, lengthening their lead of four towers to none and a 10k gold difference at 16 minutes.

The last dragon of the game resulted in a chasing skirmish through the Thunderbirds’ jungle, trading players 2-for-2, killing the Ocean Drake, Rift Herald and two more towers in the Hornets’ favor.

The final push for the nexus led to a teamfight resulting in the Thunderbirds getting aced, closing out the game at 21 minutes and 50 seconds and ending the Hornets’ set against the Thunderbirds in a victorious 2-0.

“We made a lot of plays using teleports and generally made plays happen when it came to mechanics,” George said. “More so than usual today we were in sync when it came to helping each other and playing off of one another.”