Hornets fall to 4-4 in the Big Sky 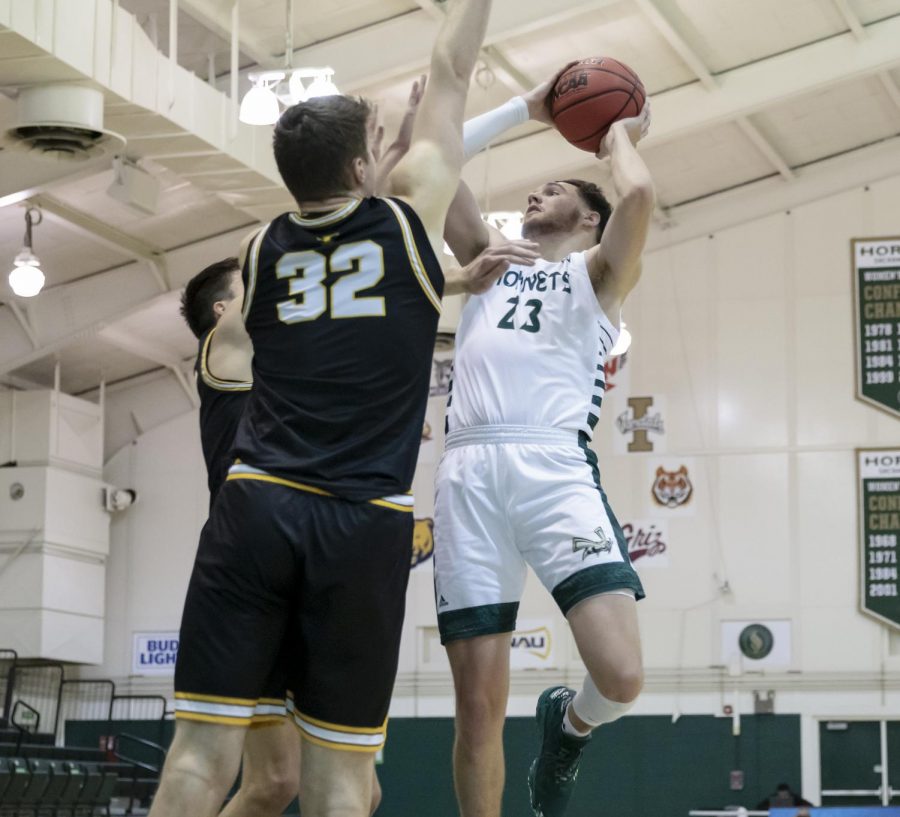 Sacramento State’s Bryce Fowler (23) draws the foul shooting over Idaho’s Chance Garvin (12) and Tanner Christensen (32) and goes on to make both free throws during the second half in the conference opener in the game against the University of Idaho at The Nest at Sac State Thursday, Dec. 3, 2020. Fowler led the team with 20 points, shooting 3-4 from deep and grabbing seven rebounds.

The Sacramento State men’s basketball team sustained its second straight loss against Eastern Washington University 94-79 in the second game of their back-to-back series.

Despite starting the game off extremely efficient on offense, the Hornets (6-4, 4-4 Big Sky) could not overcome second half runs made by the Eagles (6-6, 5-2 Big Sky).

After going ice cold from the field in their previous matchup, the Hornets shot the ball lights out to open Monday’s game.

Senior guard Brandon Davis, who finished with 12 first half points, converted his first three 3-point attempts which ignited an early 12-4 run for the Hornets.

The Hornets went on to shoot at an efficient rate for a large portion of the first half, shooting 44% from three and over 45% from the field.

Besides the productive 3-point shooting display early on, there was also dynamic shot making in the midrange from seniors, forward Bryce Fowler and guard Christian Terrell, who finished with a combined 23 first half points.

Fowler sunk an in-transition layup to put the Hornets up 17-4 with 16 minutes left to play in the first half.

Down 26-17 halfway through the first half, the Eagles proceeded to ignite their own 19-6 run fueled by a barrage of 3-pointers, which gave them the lead with under four minutes remaining in the half.

Fowler responded with multiple trips to the free-throw line and knocking down mid range jumpers. To close out the half, Fowler was able to bank in a near full-court heave to put the Hornets up three going into halftime.

Despite Sac State finding large success on the offensive end in the first half, the second 20 minutes of action was a different story for the Hornets.

Sac State didn’t score a single field goal in the second half until the 14:40 mark on a layup from junior guard Zach Chappell.

“When we’re playing to the level that we should be playing, we are a really good team,” Fowler said. “The thing we have to do is be more consistent, we were trying to force the issue and drive into the paint when they were loading up.”

Meanwhile, as the Hornets struggled to find an offensive rhythm in the second half, Eastern Washington was clicking on every level. The Eagles opened the second half with a 5-2 run that eventually turned into a lead that was never eclipsed by the Hornets.

The Eagles shot a remarkable 70% from both the field and from three in the second half with five of their players finishing with double figures. This offensive firepower ignited a run that hit 16-2 to give Eastern Washington an 80-64 lead over the Hornets at the seven-minute mark.

“In the second half, our energy dipped, and Eastern Washington took advantage of that,” Davis said. “They made runs in the second half and we didn’t answer any of them.”

The Eagles extended their lead to 21 points en route to the eventual 15 point victory.

“I think this entire weekend showed us just how hard college basketball is,” Terrell said. “We’ve made great strides to play how we know and want to play [and] these two games showed us what it’s going to take to win on a nightly basis.”

The Hornets will host Northern Arizona at the Nest in their next game on Thursday at 5:05 p.m pst.