REVIEW: “ENA” captures the feeling of a dream like nothing you’ve ever seen 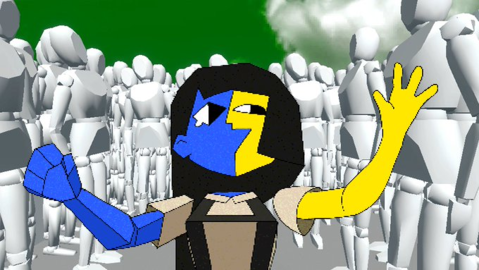 “ENA” is a YouTube mixed medium animated series by Perúvian animator Joel Guerra, that I can think of no better word to describe than ‘dreamlike.’

The series currently has three episodes, with the longest and most recent, the 17-minute “ENA – Temptation Stairway,” being uploaded to Guerra’s YouTube channel Monday. Guerra described the episode on Twitter as “the great (NOT) finale” so there is presumably at least one more episode to come, the most exciting entertainment-related news I’ve received this year.

Before we go any further – “ENA” is one of those experiences where the less you know about it going in, the better, so I will do my best to avoid spoiling it while still telling you why you should go and watch it.

“ENA” is a show about Ena, a geometric humanoid character, and her friend Moony, a… moon.

They go on adventures.

No, seriously, that’s the best description I can give you – the show has a frenetic pace, with new characters and seemingly very important plot points showing up multiple times a minute only to be immediately moved on from. The show openly laughs at the idea of giving you even a lick of context or exposition, with characters complaining how confused they are but still not explaining anything.

And yet, it all feels deliberate. “ENA” doesn’t come off as “lol random” humor, it comes off as a piece of surrealist art using the imagery and soundfonts of the digital generation to explore its psychology.

On the subject of imagery, the show seems undoubtedly inspired by late 90s, early 2000s computer and video games – the first episode ends with the iconic PlayStation start-up sound.

The characters talk with voices that sound like they’ve been compressed to fit on a game cartridge or very early CD-ROM, with appearances and demeanors that feel straight out of a campy kids’ adventure game.

Despite the humor and imaginativeness, there’s a faint all-encompassing eeriness to the show, and several scenes get very close to outright surrealist horror. Comparisons to something like the game LSD: Dream Emulator practically make themselves.

That’s not to downplay Guerra’s unique vision, however. The show merges the aesthetics not only of old video games, but of old computer operating systems, the vaporwave music genre, sci-fi surrealism and more to create an experience that wears its inspirations on its sleeve, but still feels like the first and only in a bold new genre.

Subtle but direct allusions to various specific video games, locations inspired by obscure pieces of internet trivia, shot-for-shot remakes of famous music videos and more are par for the course during an episode.

“ENA” is a video game you have to watch someone else play and that you aren’t allowed to read the manual for. For that reason, it truly feels like a fever dream. One where you can tell you’re moving, but can’t choose where you want to go, and as soon as you realize where you are, you’re somewhere else. One where all you can do is let all the sights and sounds your mind – or in this case, Guerra’s – pumps out wash over you until you awaken.