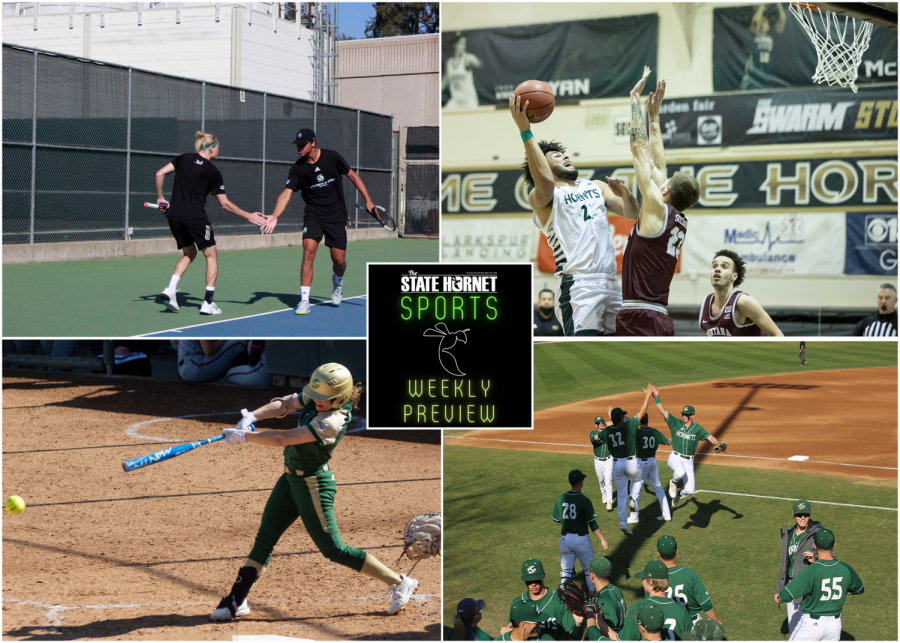 What to watch for this week in Hornet Sports. Baseball opens against the formidable Arizona State Sun Devils, softball has a home doubleheader against Cal and men’s basketball look to hand Southern Utah their first home loss. Graphic by Max Connor

With so many sports during this happening all at once due to delays caused by the pandemic, we will bring a weekly preview of the most important matches to look for and how you can watch them live from your computer.
Men’s basketball looks to give Southern Utah its first home loss
The Hornets who currently sit at 6-6 (4-4 Big Sky) travel to Cedar City, Utah on Thursday to take on the Thunderbirds, for a 6:05 p.m. start time in the American First Event Center. The game will be available on Pluto TV for those looking to watch. The Thunderbirds are currently second place in the Big Sky Conference (13-3, 6-2 Big Sky.)

The Hornets look to rebound on the road after dropping three straight. To do so they’ll need big performances from senior stalwarts Christian Terrell and Ethan Esposito. Southern Utah has yet to lose at home this season (11-0) perhaps due to a home-court advantage created by being one of the three teams in conference that allows fans in the arena.

Southern Utah also features the most potent offense in the Big Sky averaging 85.6 points per game. Hornets head coach, Brian Katz, looks to inch the Hornets over .500.
Women’s soccer takes on the Oregon Ducks looking to continue winning ways
The Hornets will host the Ducks for a Friday afternoon match at Hornet field, starting at 3:00 p.m. For fans at home, here’s the Pluto TV link.

The Hornets look to build on their overtime victory against Saint Mary’s, in their season opener Thursday. They will face the University of Oregon who is 1-0 after defeating Gonzaga on February 7th.

In Oregon the Hornets find themselves against a Pac-12 opponent, who in their last full season, (2019) finished ranked 77th of all NCAA teams based on RPI. The Hornets will look to get more shots on goal after being outshot 17-8 against Saint Mary’s with two of the eight shots finding the net.

The Hornets are coached by Randy Dedini, who has led Sac State to their only two NCAA tournament appearances, and looks to continue the Hornets hot start.
Hornets’ baseball to open season against Pac-12 powerhouse Friday
Sac State baseball will open their season in the desert with a three game set versus Arizona State starting Friday at 5:35pm. Sac State went 9-7 in the abbreviated 2020 season and is looking to get off to a quick start. Arizona State presents a formidable challenge, as Pac-12 opponent and perennial College World Series contender, the Sun Devils, who went 13-4 last year, open their season hosting the Hornets. To access the game use this link.

The Hornets will lean on senior outfielder Matt Smith who led the club in home runs and slugging percentage last year. On the mound the Hornets will look for two returners to set the tone, Travis Adams and Scott Randall, who posted a 1.57 and 1.75 ERA respectively last season.

The Hornets are coached  by Reggie Christiansen in his eleventh season with Sac State.
Hornets softball looks to jump on Cal Bears in doubleheader Saturday
Story continues below photo

The Hornets have started their season 2-2 and look to build upon that in a doubleheader versus the Bears, who open their season on the road in Sacramento. The doubleheader starts at noon Saturday, at Shea Stadium on campus. The game is available to watch online with this link.

For the Hornets, the story so far is the damage Lewa Day has done at the plate to open the season. Day, through four games, has gone 4-8 with two homers and a double, while also being walked six times. Day led the team in home runs last season with six and is well on her way to pacing the team once again. Pitching for the Hornets we find Marissa Bertuccio, who’s allowed just a single run through 13 innings this year, while allowing less than one baserunner per inning.
Sac State men’s tennis and Grand Canyon University a battle of winless teams
Story continues below photo

The winless Sac State tennis team will take on the winless Grand Canyon University team at 10 a.m. on Saturday morning. While the Hornets have had to manage injuries to Mark Keki and Carlos Rodriguez, it’s been a disappointing start for Sac State who has only mustered one point in two matches.

The Hornets will catch a break facing GCU who has only gotten two more points than the Hornets, taking five more matches to get there. The Hornets will rely on senior Hermont Lagaspi and Dutch freshman Liam Liles to man Sac State’s main doubles team.

Kevin Kurtz is the Hornets Head Coach, where he’s in his fourth year at the helm. Prior to that he was the team’s assistant coach for 12 years.