EDITORIAL: CSU backtracking on in-person instruction is nothing short of betrayal 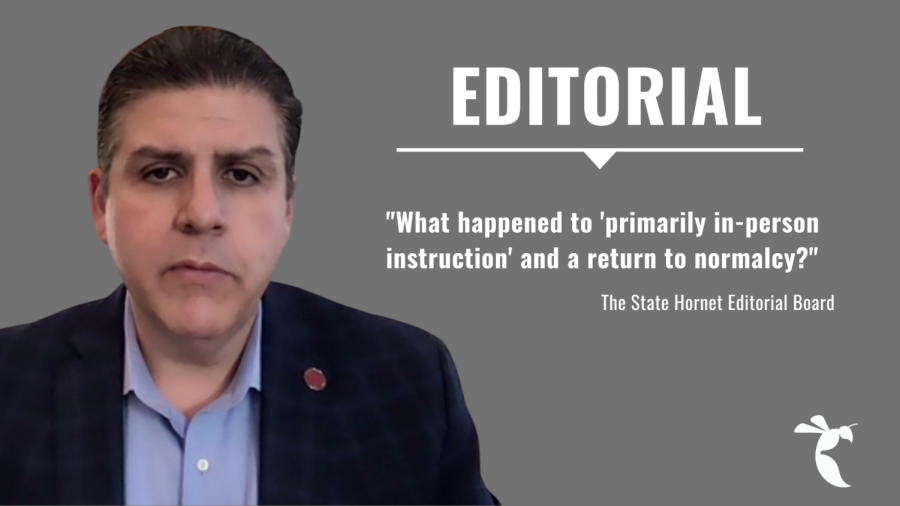 California State University Chancellor Joseph Castro said he anticipates at least 50% of classes across the CSU system will be in-person this fall semester at a news conference on Monday, Feb. 8, 2021. Graphic made in Canva.

California State University Chancellor Joseph Castro said in a Monday news conference that he anticipates at least 50% of classes across the CSU system will be in-person this fall semester.

Great! Except this announcement comes after months of announcing and reaffirming that the majority of campus operations would be in-person for fall 2021 and just two weeks after Castro said he still expected majority in-person instruction, with no mention of any percentage points.

50% of classes does technically count as a majority, yes, but it feels like a deceptive moving of the goal posts after months of CSU administration basically implying that fall 2021 would be a return to normalcy on campus.

RELATED: CSU anticipates at least 50% of classes will be in-person for fall 2021

What’s worse is Castro has now absolved himself of any system-wide accountability, saying the decision of how much in-person instruction will take place is up to each university president and  county health officials. It seems clear that should and would always be the case, so why then did the Chancellor’s office announce a return to in-person for fall 2021 in December? Perhaps there was a reason.

“This decision comes at a good time as high school and transfer students have until December 15 to complete their applications for fall admission,” Castro said in a December press release. “I urge eligible students across the Golden State to apply for admission to one or more CSU campuses.”

It feels like what happened here was that the CSU worked to make applicants believe they would be getting full in-person instruction during fall 2021, then walked it back only after students had already applied and been accepted – delaying the announcement of fewer in-person classes to prevent mass dropouts.

Why else would Castro have mentioned applications so doggedly?

Ten days after Castro’s December press release, the Los Angeles Times reported that the CSU saw a 5% decrease in applications for fall 2021.

Let’s do some quick math, shall we?

If the application decrease leads to a similar enrollment decrease, that would mean a loss of over 24,000 students, which would be a loss of over $69 million in base tuition for the fall semester alone.

$69 million! You can almost smell the panic.

What’s worse is that some schools already know they won’t even reach 50% of classes in person.

Chico State announced Tuesday that it anticipates only 20-30% of classes will be in-person for the fall 2021 semester, saying classrooms on campus are too small to accommodate social distancing procedures as directed by public health guidelines.

Steve Perez, Sacramento State’s provost and vice president of Academic Affairs, told The State Hornet previously that the school’s plans are up in the air as well.

“Sac State is currently working through a planning process for fall 2021 that will provide increased face-to-face instruction in as safe an environment as possible,” Perez said.

“Increased face-to-face instruction” doesn’t exactly sound like “planning for an anticipated return to delivering courses primarily in-person starting with the fall 2021 term,” as stated in the CSU press release from December.

Not only did the CSU sell potential students an incomplete portrayal of what fall 2021 would be, but they gave their students who are hanging on by a thread during a pandemic false hope.

One of the most upsetting aspects of this announcement by Castro is that if the CSU is genuinely not able to offer an in-person semester safely, then we don’t want them to force it. Obviously we’re all tired of Zoom University and want to go back to campus, but none of us want our immunocompromised classmates or their immunocompromised family members or coworkers to be put in danger by the CSU fully reopening prematurely.

But then again, why give us that false hope?

Keeping the campus community safe from COVID-19 is difficult enough as it is, but Sac State will not even require its students to get vaccinated for COVID-19 before taking in-person classes in the fall. Other vaccines (including Hepatitis B, meningococcal disease, chickenpox, tetanus-diphtheria-pertussis, measles, mumps and rubella, as well as a screening for tuberculosis) are required by any CSU for students to enroll in classes.

At Monday’s news conference, Castro evaded answering whether or not the CSU would require its students to be vaccinated for COVID-19 before returning to any in-person classes in the fall, continuing to put the responsibility for any decision made onto each university’s administration.

Castro said he would prefer to respect those who do not wish to be vaccinated, which is putting others who would interact with unvaccinated people on campus at risk. Why can’t the COVID-19 vaccine be required for students along with the other immunizations, for the safety of everyone on campus? After all, wouldn’t that element of safety that the vaccine provides bring the CSU closer to delivering a primarily in-person semester in the fall like they promised us?

All this is nothing short of a betrayal of a student body that has already dealt with being essential workers during a pandemic, (a Pew research study showed that 71% of people with some college had job responsibilities that could not be done from home) while trying to study in noisy households, all while paying full price for campus services they can’t use and an education that can charitably be described as incomplete.

Being back in-person was a distant flame of hope in the middle of a once-in-a-century public and mental health shitstorm and after lighting that flame, the new chancellor is now tilting a bucket of water over it.