A collection of influential songs from Black musicians 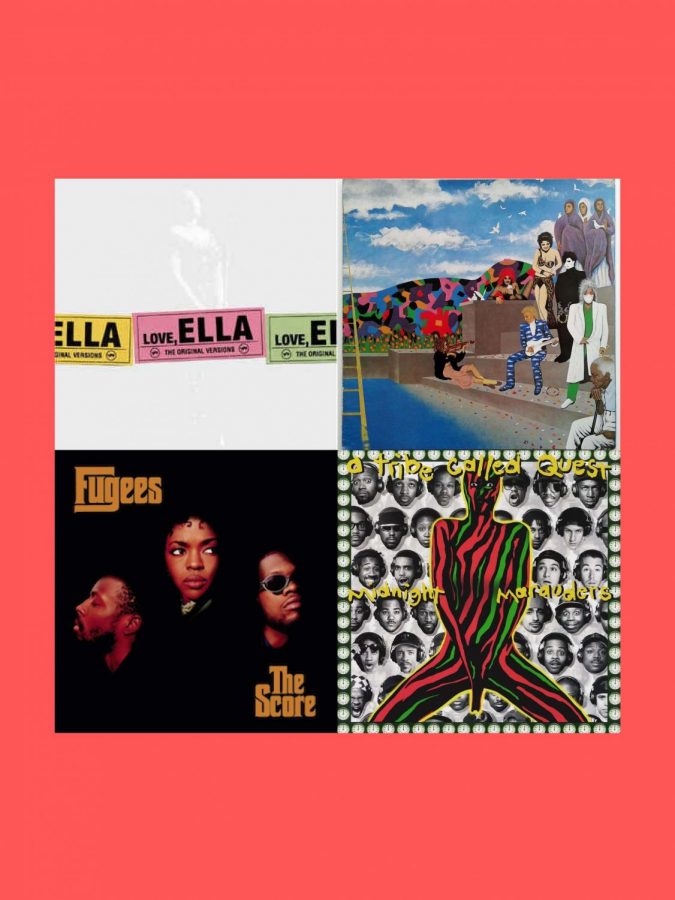 Khalil Bourgoub’s collection of music queued up to celebrate influential Black artists includes a diverse representation of the most impactful genres of music they have played key roles in advancing. Album covers are Love, Ella by Ella Fitzgerald, Around The World In A Day by Prince and The Revolution, The Score by Fugees and Midnight Marauders by A Tribe Called Quest. Graphic by Khalil Bourgoub

With Black History Month coming to an end, one way we can celebrate the influence Black people have had on music is looking into the past and recognizing their impact on modern culture through the art they’ve created. I curated a playlist to give insight on the different genres that defined generations, with some of my personal favorites, as a salute to all the art that has shaped the lives of many.
Soul, jazz and blues


Three genres of music that have been woven into American culture have been the blues, jazz and soul, which can be seen as the building blocks of modern music. From the “Godfather of Soul” James Brown to Aretha Franklin, this era of post-Harlem Renaissance music from the 1940s-60s put the spotlight on Black artists in a way that had never been seen before. This era of Black musicians produced music you can dance to, you can cry to and you can share with your people.
Rock, funk and disco

As we progress through the decades we can see examples of the previous genres’ impact on those to follow. Sometimes this impact was obvious, such as Jimi Hendrix being influenced by heavily stylized blues guitar, and funk music grasping at a slower but more groovy feeling version of soul in Parliament’s music, but where can we see jazz’s influence on future genres? The drumming!

In popular music of the ‘70s and early ‘80s, musicians replaced swinging eighth notes and a high hat accenting the up beats with straight eighth notes and accents on the down beats. This gave musicians more room to pick where the listener can hear the jazz-influenced sections of their songs, for example, in drum breaks and solos.

This era of music really puts a focus on letting your hair down, going to a club and sharing an experience with your friends. If this era of musicians took one thing into consideration, it was fun.
Pop, Prince and Jackson

This section of the playlist is made up of songs you might hear on the radio in the car with your  parents.

This was the era Black musicians started openly exploring outside influences to reach the huge audience that ‘80s pop did. Art has largely always been about collaboration, but I believe the 80’s was one of the first musical eras where it was so clear that everyone wanted to work with everyone else.

This also started the implementation of heavily synthesized music, which was propelled to the forefront of pop music by the likes of “King of Pop” Michael Jackson and Billy Ocean.

There will always be remnants of the building block genres in this music, whether it be a funk-inspired guitar riff or a soulful vocal passage that we can hear in Prince’s music. However, this time period was when Black artists fused with the popular media to bring you catchy monikers like the King of Pop, referring to Michael Jackson, that everyone remembers.
‘90s-2000s R&B

The music Black artists leaned into creating after the ‘80s branched in different paths that have both influenced modern music.

Hip-hop and R&B of the ‘90s and early 2000s, shifted societal culture. While everyone was ready to wear their baggy jeans, huge t-shirts and blast Nelly in the car, pop artists were writing songs with beats behind them like those used by Aaliyah and the Fugees. This time period grasped at returning to very soulful and personally relatable lyrics about people’s everyday lives that reignited our love for the vulnerable and personable side of music.

I’d say this era of music was the five-star meal of Black music history, where we can find smooth, beautiful voices alongside rapped lyrics that roll off the tongue. We listen to this music to feel a connection between one another and in turn, feel a connection to the artist.
90s-2000s hip-hop

The last section of the playlist covers the same period of time as the previous, but both ‘90s and 2000s hip-hop and R&B had such an impact that I felt the need to give each its own section.

Rap music rose to prominence in the ‘90s. While New York, the mecca of hip-hop, was home to  artists such as The Notorious B.I.G. and A Tribe Called Quest, the West Coast was popularizing its own sound with contributions from 2Pac, Dr. Dre and Snoop Dogg. The ideas of conscious and gangster rap competing for the spotlight gave Atlanta rappers like Outkast their own room to shine, creating new subgenres of hip-hop to explore.

To round out the end of this era, I included Kanye West, a controversial rapper who elevated the genre of music out of the battle between conscious and gangster rap that we see today, at the forefront of our popular music in 2021. Songs like “Frontin’” and “Work It” were examples of the production that elevated the influence of 2000s rap, which was the experimental and fun energy that went into the beats of all its hit songs.