Nelsen: 'We are witnessing terrorists trying to destroy the very foundations of our country' 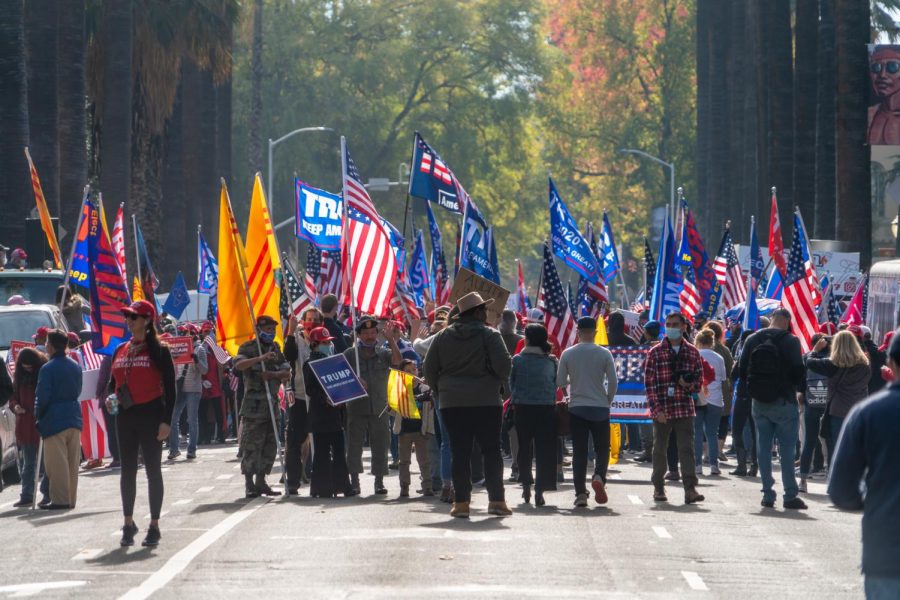 Trump supporters gather on Saturday, Nov. 14th, 2020 along 10th Street in front of the California State Capitol in response to Joe Biden’s projected election victory. South Korean flags could be seen alongside 'Trump 2020' and American flags.

A mob of domestic terrorists supporting President Donald Trump broke into the U.S. Capitol on Wednesday while Congress convened to certify the presidential election declaring Joe Biden as a winner, according to The Associated Press.

“Live on television, on our cell phones, on our computers, we are witnessing terrorists trying to destroy the very foundations of our country,” Nelsen wrote in the email.

The State Hornet spoke with members of the Sac State community so they could share their opinions on the Capitol insurrection.

Sac State anthropology professor Raghu Trichur criticized news media’s labeling of those who stormed the Capitol, saying news outlets often cite spokespeople who use terms like “insurrection” or “terrorist” but refuse to use those terms themselves. He said news outlets like to present a “confused, perplexed profile.”

“They will never in and of themselves call them what it is,” Trichur said. “Whereas, when this happens in another country, they’re ready to call them terrorists or hooligans or whatever.”

“The fact is that we have someone [President Donald Trump] in office who is not taking charge and owning up to his losses, is instead inciting violence onto his followers,” Montero said.

English major Fernando Gonzalez-Cortez said via Twitter direct message that Trump acted as if what was happening was the people trying to express their voice despite the insurrection in the Capitol.

“They’re so upset about their pick not winning that they are willing to throw democracy out the window,” Gonzalez-Cortez said. “It’s just sad, I really hope things change.”

“We do not condone political violence. Coming from the left. Or from the right,” Roche said via text. “At the end of the day we are all brothers and sisters. We are all Americans.”

“Well one of the most important things we already have done, and that’s have our voices heard in this election,” Marty said via text message. “I think another thing that’s important is staying informed and not accepting this as normal, what we saw today was a national disappointment.”

Montero and Marty also expressed their disappointment in the gatherings of Trump supporters during the COVID-19 pandemic.

“So many front line health care workers are putting their lives at risk everyday during this pandemic, and our own president will put this group not only at risk of contracting the virus, but also possibly create more stress to healthcare workers already working very hard to do the best they can with the little supplies/space they have,” Montero said.

Marty said he was completely disgusted by not only the disregard for COVID-19 safety measures, but the mob of criminals that trashed the Capitol.

“Our democracy is sacred and incredibly important to the United States of America, and this is a direct result of attempts to undermine our democratic elections that occurred both in November and yesterday,” Marty said.

Gonzalez-Cortez said he believes events of political unrest will not end when President-elect Joe Biden is in office, but that Biden will not be directly inciting them.

“Obviously when he’s [President-elect Joe Biden] in office the president won’t be inciting riots,” Gonzalez-Cortez said. “And when things do happen he will try to de escalate the situations.”

Roche did not have any comments on whether he believes Trump had any culpability in his supporters breaking into the Capitol, causing the formal counting of the electoral college to be disrupted.

#mc_embed_signup{background:#ebebeb; clear:left; font:14px Helvetica,Arial,sans-serif; }
/* Add your own Mailchimp form style overrides in your site stylesheet or in this style block.
We recommend moving this block and the preceding CSS link to the HEAD of your HTML file. */

The presidential transition. The pandemic. The parking. Sign up for The State Hornet’s coverage as Sac State navigates the new year.

Trichur said he does not believe anything in modern American history equates to this moment, but has seen similar incidents in other countries’ capitals in the so-called Third World like Caracas, New Delhi and Bogata.

“Basically, you have an election process, a due process in place, [but] if someone who is powerful enough, influential enough, finds themself in a position they would like to be in, then they use extra-electoral processes, processes beyond the procedures allowed by democratic practices, to disrupt the process,” Trichur said.

Trichur called Trump’s attempted coup “non-democratic” and an attempt to muscle into power, and said he was unsurprised by the coup but was more disturbed by security’s reaction to the rioters.

“If this was to be a moment led by Black Lives Matter or some other entities, the security would have pretty much blown them out of the water,” Trichur said. “And that surprises me. That hurts me.”