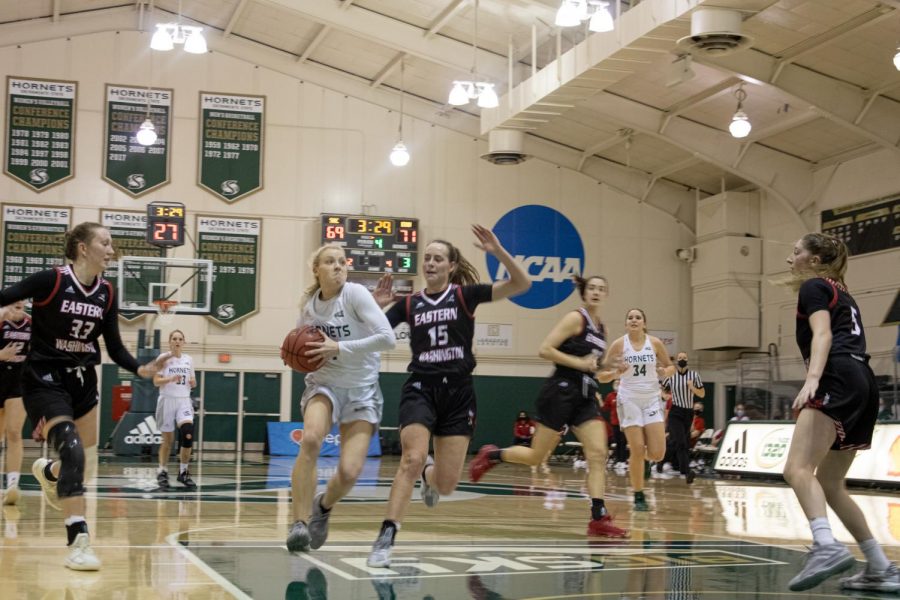 The Sacramento State women’s basketball team got its first win of the year, beating Eastern Washington 82-76 thanks to a career high performance from junior guard Jazmin Carrasco.

The Hornets came into the game 0-11 on the season but Carrasco lit up the 3-point line going 6-8 from beyond the arc and a game-high 26 points.

“The best thing about tonight was we finally got a win, and I am really proud of our team for that,” said head coach Bunky Harkleroad. “I love the way we finished the game. We had our best quarter of the season with the 32-point fourth period, and we did a lot of good things that led to winning in that period.”

Sac State had a great start from the jump ball, scoring 20 points in the first quarter and shooting 46% from the field, while the Eagles (5-9, 4-5 Big Sky) had 11 points and shot 26%. The Hornets went on a 13-3 run to end the first quarter with a great display of defense and really showed a flow in their offensive game.

The Hornets kept the Eagles at bay in most of the second quarter with numerous defensive stops, but their offense went into a scoring drought that lasted about three minutes while going 1-11 from the field during that time.

The Hornets still had the lead going into halftime 34-28 mostly due to Carrasco, who had 15 points at halftime and shot 4 of 5 from behind the arc. Junior forward Tiana Johnson added 10 points and five rebounds going into the half.

Carrasco has been on a roll, setting new career highs for points in each of the last three games.

“Jazzy [Carrasco] really stepped up today and hit some shots we really needed, and I think we prepared for our defense pretty well, and we knew what was coming and hit them first,” junior guard Summer Menke said. “Obviously we can always improve on that, but it was definitely a step up.”

Jazmin Carrasco has 15 points and Tiana Johnson has 10 points going into the second half. @SH_Sports

To start the third quarter, the Eagles threw the first punch by making their first three shots of the quarter while the Hornets turned the ball over. But the momentum shifted after Carrasco sparked an 8-0 run, which forced the Eagles into a roughly three-minute scoring drought.

It became a game of scoring runs as the Eagles hit back with their own 9-0 run, forcing the Hornets to turn the ball over once again. The score going into the fourth quarter was 52-50 with the Hornets trailing.

In the first few minutes of the fourth quarter, both teams exchanged offensive buckets. Both teams started the quarter 4-4 from the field showing no quit from either side.

The hot shooting continued for both teams as the Hornets made their next 3-5 field goals while the Eagles went 2-3 from the field.

But the Hornets put the pedal to the metal, going on a 9-0 run with 1:34 left in the game, causing the Eagles to call a timeout due to the Hornets firing on all cylinders offensively and especially defensively, not allowing the the Eagles to score a single point for about three minutes and 30 seconds in crunch time.

The big difference in the win for the Hornets was in second chance points, where the Hornets outscored the Eagles 17-4. The Hornets were also active on the boards with 12 offensive rebounds compared to the Eagles’ six.

“Everyone works hard, and oftentimes we want results right now, and we want things to happen for us quick and easy,” Harkleroad said. “And nothing has been easy for us this season, and I am proud of our players for continuing to work and believe in what we are trying to do.”

Carrasco weighed in on how it felt to get the first win of the season.

The Hornets will try for another win when they face the Eagles again Saturday, Jan. 30 at 12:05 p.m. at the Nest.