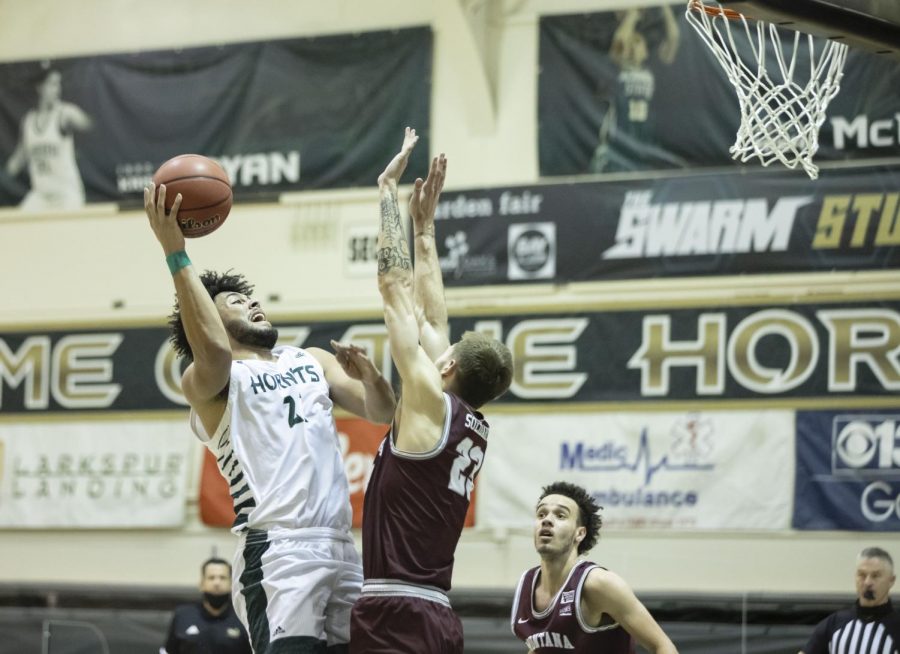 Sacramento State Hornets forward Ethan Esposito (22) draws the foul from Montana Grizzlies forward Mack Anderson (23) during the second half of the conference game at the Nest at Sac State Thursday, Jan. 21, 2021. Esposito made both free throws.

The Sac State men’s basketball team suffered their first home loss of the season to the University of Montana Grizzlies 78-66 Thursday.

“We didn’t play hard enough to beat them on this night,” said head coach Brian Katz. “We got away from our core values defensively and offensively. Basketball is like life — you get what you deserve.”

The Hornets opened up the game with a four-minute 6-2 run ignited by their zone defense, which forced multiple Grizzly turnovers and allowed junior guard Brandon Davis and senior forward Bryce Fowler to get easy in-transition layups right out the gate.

University of Montana responded with a staggering 10-0 run while Sac State struggled to find an offensive rhythm in the half-court. The Hornets converted on only four of their first 15 shots, most of them being missed jumpers.

The Hornets’ offensive struggles shaped the trend of the first half, with the Grizzlies extending their lead to double digits.

The Grizzly defense was a large contributor to Sac State’s offensive woes. Though the Hornets shot at a clip of 46%, the eye test would tell you that the offensive flow was staggered.

“They’re definitely a physical team,” Fowler said. “We had to work to get to our spots. Also, we just weren’t getting stops on defense, so we couldn’t run and transition.

“I think it just took too many, not bad shots, but shots that they wanted us to take,” senior forward Ethan Espositio said. “Especially me. I was taking some speedy shots that I don’t really take.”

Esposito led the Hornets with 24 points.

This run was ignited by back-to-back threes from senior guard William FitzPatrick and Fowler, who finished with 8 and 13 points respectively.

Despite the Hornets’ resilience, the Grizzlies went on their own run and forced Sac State to foul and put players on the line.

Altogether, the Grizzlies shot 30 free throws for the game, 21 of which came in the second half.

Sac State is set to play Montana for a second time on Saturday at 11 a.m. PST.