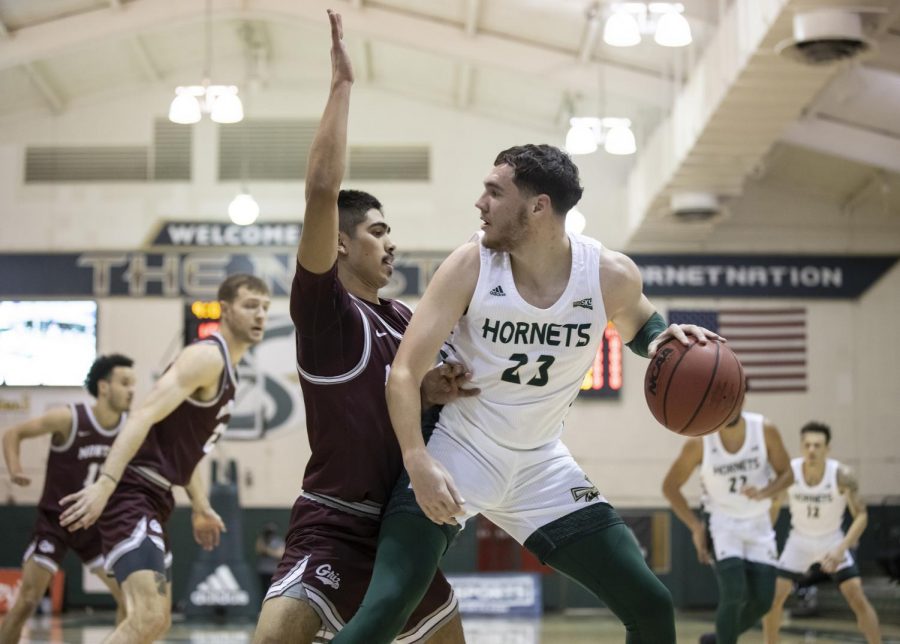 Sacramento State Hornets guard Bryce Fowler (23) dribbles the ball looking for an open man with Montana Grizzlies guard Josh Vazquez (3) on defense during the first half during the conference game at the Nest at Sac State on Thursday, Jan. 21, 2021. Fowler led the team with two steals in the away game against Eastern Washington on Sunday.

The matchup was originally set for Thursday but was postponed after Eastern Washington paused all activities following “a positive COVID-19 test result amongst Tier 1 individuals within the EWU program.” The NCAA identifies Tier 1 individuals as student-athletes, coaches, athletic trainers and physical therapists, medical staff, equipment staff and officials.

Despite a resilient second half comeback from the Hornets (6-4, 4-3 Big Sky), their offensive struggles in combination with the Eagles’ (5-6, 4-2 Big Sky) interior defensive dominance resulted in a Sac State loss.

The game opened up with gritty and physical play without much offensive momentum from either team. At the 16-minute mark of the first half, the Eagles led with a score of 6-2 with both teams shooting under 35%.

The Hornets found an offensive spark with a low-post layup from senior forward Ethan Espositio and a long distance three from senior guard Brandon Davis that eventually cut the Eagles’ lead to 1with a score of 7-6 at the 15-minute mark.

The next three-minute duration of play displayed the most bucket trade offs throughout the matchup, seeing six lead changes that mostly consisted of layups and interior scoring from both teams.

Close to midway through the first half, the Hornets lost all the offensive consistency they had once maintained, going on a scoring drought that stretched over an 11-minute span to close out the first half.

Shooting 23% from three and going a total of 9 for 28 from the field, the Hornets could not find the bottom of the bucket to end the first 20 minutes of action.

“We got great shots, we just weren’t knocking them down,” Davis said about the team’s offensive struggles. “We came out with good energy, but in order to beat a good team like Eastern we need to maintain that effort.”

In addition to the Hornets struggling to score in the final stretch of the first half, the Eagles exploited Sac State’s defense and ended the half with their own 18-1 run.

Capped off by three straight possessions with a 3-pointer and an interior assertiveness that led to the Eagles out rebounding the Hornets 22 to 19,  the Eagles were able to extend their lead to a score of 37-22 going into the second half.

Sac State came out of the second half with an aggressive tempo that led to a 7-0 run right out the gates that was ignited by a sideline jumper from senior forward guard Christian Terrell.

“That’s who we are, we aren’t going to quit because we are down double digits,” senior forward Bryce Fowler said about the team’s second half comeback. “It shows us that when we make the adjustments and play harder than we did in the first half, we can beat this team.”

At the 11-minute mark in the second half, the Hornets were able to trim the Eagle lead down to 42-35 after back-to-back layups from Esposito.

Despite the Hornets finding an offensive rhythm, they struggled to limit the paint presence from the Eagles. Eastern Washington outrebounded Sac State in the second half and scored 18 of their 31 second half points in the paint.

“We just have to work harder down there [in the paint],” Fowler said. “They are strong, physical, smart, we have to be quicker to put a body on them when the shot is up and make sure we’re boxing them out.”

Close to the two-minute mark in the second half, the Hornets went on a 10-4 run fueled by low-post baskets from Esposito and Davis to cut the lead to six with a score of 58-52.

The Eagles then responded with their own 6-5 run that pushed the lead to 7.

With under one minute remaining, senior guard William Fitzpatrick was fouled on a three point attempt and converted all three free throws to cut the lead to four. However, the Hornets simply ran out of timeouts, and after several possessions of late game fouling, could not suppress the lead within striking distance and suffered the loss.