Drive-thru and virtual ceremony were other options given to seniors 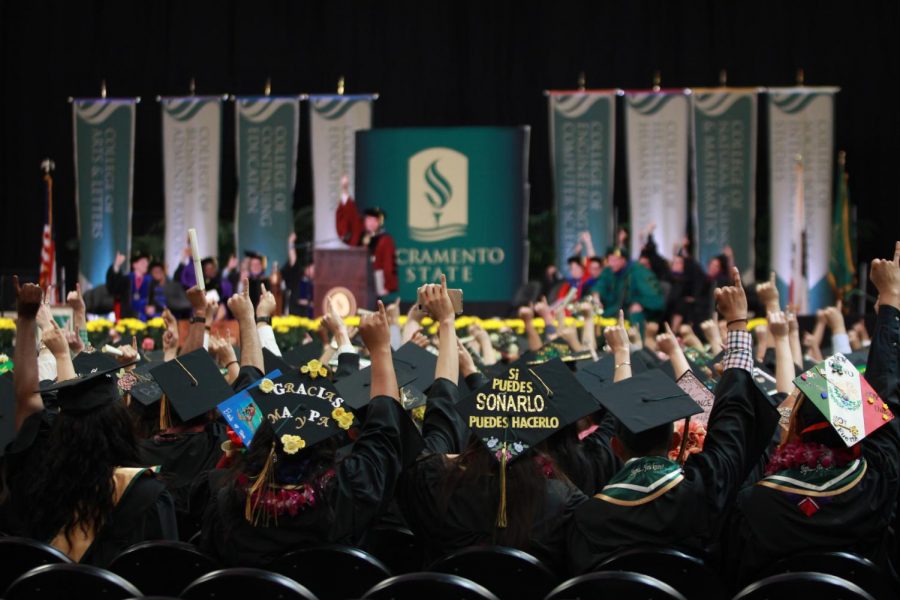 Students attending the Spring 2018 commencement ceremony held at Golden 1 Center join Sacramento State President Robert Nelsen in a ‘Stingers up’ salute after his address on May 18, 2018. Nelsen announced an on-campus, drive-through commencement for the 2020 and 2021 graduating classes Monday in a SacSend email.

Sacramento State is considering an outdoor on-campus commencement option as well as drive-thru and virtual options for spring commencement, according to an email survey sent Wednesday to graduating seniors and the class of 2020.

The survey allowed participants to choose how likely they would be to attend the three options and stated that a virtual graduation will be available for all who do not want to attend an on-campus event.

For the on-campus and drive-thru commencement options, guests and graduates would need to adhere to state and university guidelines, including wearing face masks and social distancing, according to the survey. It also stated that for either of these options, “congregating on campus” after the ceremonies would not be allowed.
On campus commencement
An on-campus commencement at Hornet Stadium would have multiple ceremonies per college and grouped major, with only “roughly” 700 graduates per ceremony maximum, as well as two to three guests per graduate.

The drive-thru option would be like a parade through campus with entertainment along the way, according to the survey.

It would allow for one vehicle per graduate/family with only the graduate being allowed to exit the vehicle when they walk across the stage.

Graduates would upload their photo and a message to a digital ceremony page. Students’ names can be called along with individual graduate slides and videos.