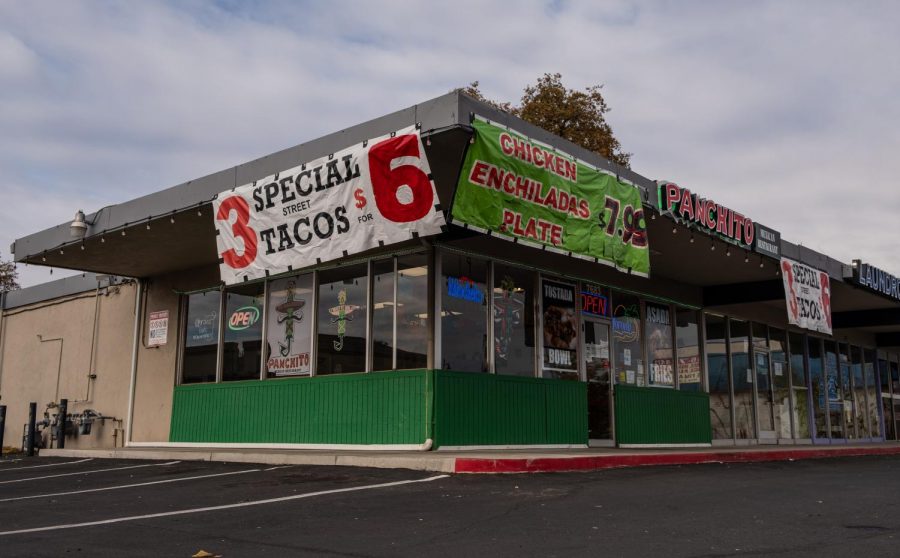 Panchito Mexican Restaurant on Auburn Boulevard in Citrus Heights on Friday, Dec. 11, 2020. Owners Jose and Rosibel Osuna said they hope their new specials will draw in business during the lockdown.

Open since 2017, Panchito Mexican Restaurant, located on Auburn Boulevard in Citrus Heights, is owned by Jose and Rosibel Osuna, who said they have stayed afloat by Rosibel working a minimum of 80 hours a week and Jose working feverishly to come up with new deals and marketing strategies.

Seeing a 50% decrease in business has also left Panchitos and it’s employees in a challenging financial predicament according to the Osunas. After seeing minor improvements, with Rosibel working those 80 hours and Jose coming up with new deals, such as the “three tacos for six dollars combo,” the Osunas said they face the latest stay-at-home order with uncertainty.

“We work more than the staff because we can’t afford it,” Rosibel Osuna said. “I’m about to talk to the owner [of the building] and see how he could help us out.”

The Osunas are just two of the millions of small restaurant owners and employees trying to survive the restrictions caused by the pandemic.

California has more than 76,000 restaurants which employ over 1.8 million people, according to the National Restaurant Association. That’s 11% of the California labor force and the state’s most recent lockdown is set to have a large impact on this demographic of businesses and individuals.

On Dec. 9, the Greater Sacramento Region’s ICU bed capacity fell to 14.4%, triggering the state’s current lockdown measures. The new stay-at-home order will last at least three weeks with weekly assessments on ICU bed capacity until the percentage of available beds goes back up to, or past 15% within a region.

With the stay-at-home order now active, small business owners like the Osunas expressed both the hardships and adaptations they have had to face.

Open since 1999, Teriyaki To Go, located on J Street in Downtown Sacramento, has seen a significant decrease in business since the beginning of the COVID-19 pandemic.

Jay Pak, owner of Teriyaki To Go, said that business has been down 60% or more.

Taking advantage of coronavirus relief options, Pak said he signed up for and successfully received a Payment Protection Program loan in March, but it was only enough to cover two months worth of total business expenses. The purpose of the PPP loan is to provide direct incentives for small businesses to keep their employees on payroll.

Pak said he had two employees before the initial lockdown in March occurred but since then it has just been him and his wife running the establishment.

“The applications were a little confusing, so it was harder for us to see what we needed,” Rosibel Osuna said. “We were out of luck. We didn’t get any assistance whatsoever.”

With the year’s final holiday around the corner, the economic issues the Osunas have faced will carry into their Christmas celebration.

“I told my daughter, ‘I’m sorry but this year is very different,’” Jose Osuna said.

Having stayed open for takeout and delivery since March, the Osunas said the cost in wasted product from closing down the restaurant would be detrimental in the long run.

“You cannot just close a business and then restart the business,” Jose Osuna said. “Every single time that you restart a business, you have capital you have lost and capital that you need to put in it.”

After being denied the PPP loan, the Osunas made it clear that restarting their business is not an option.

“It’s thousands of dollars to restart,” Rosibel Osuna said. “Whatever we make is to maintain the restaurant.”

Justin Berenstein, owner of both Liquid Therapy Bar in Fair Oaks and The Couch Sports Lounge in Citrus Heights, has implemented a new strategy to keep business steady during the stay-at-home order.

“My goal is to keep all of my employees on,” Berenstein said. “It’s not a profit thing, it’s about keeping my employees fed.”

The Couch Craft Pizza Truck, which Berenstein said he purchased in October, can be scheduled by appointment via Facebook to come to clients’ neighborhoods or places of work for a $100 minimum tab including fresh-baked pizza, a full bar and salads and wings pre-ordered.

“We don’t price gouge,” Berenstein said about the truck’s prices. “Our prices for drinks and alcohol are the same they are at our bar — it’s just at your house.”

Opening in September 2019, Liquid Therapy Bar, like many other businesses, was forced to shut down in March. During the first stay-at-home order, Berenstein’s business license for the establishment had expired, which resulted in a fine after the county sent an inspector to the business during the lockdown, Berenstein said.

“It’s a government-ordered shutdown, yet you’re required to pay like you’re in business,” Berenstein said. “It’s an assault on small businesses the way I see it.”

Pak also expressed his frustration with the lack of help for small businesses like his.

“At least the state or city should especially help any small merchants,” Pak said. “And they’re no help.”

Like so many small business owners Pak said he was unsure about the future of his business during the current stay-at-home order.

“I have no idea,” Pak said. “I have no plan. I just follow what they [the government] want.”