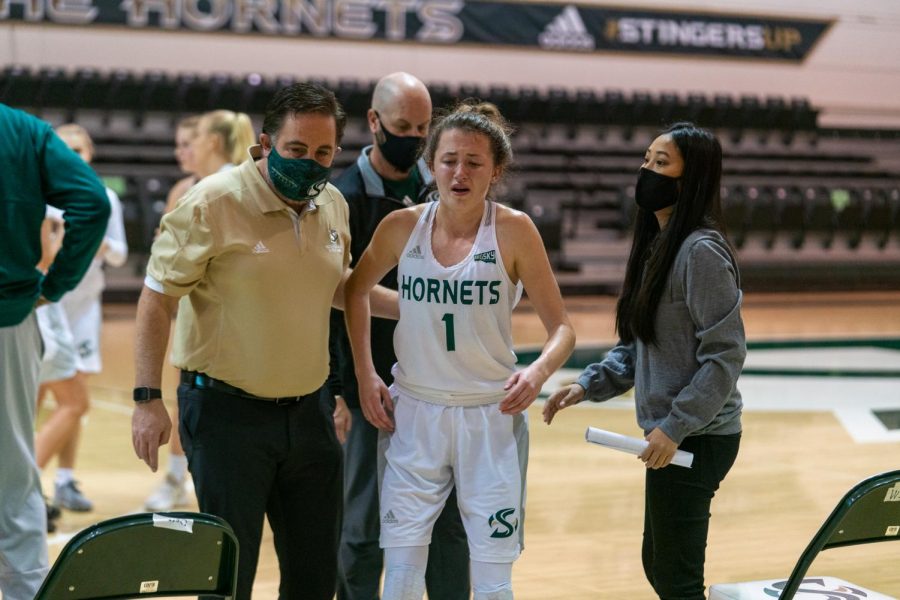 After suffering from an ankle injury on the court, Point Guard Milee Enger stands up and walks to the benches in the first half of Sac State Women's Basketball season opener on December 12, 2020. Enger was unable to return to the court as her team continued with six players.

The Hornets (0-2, 0-2 Big Sky) went into the game after the second game of their season against UC Davis was canceled Tuesday, Dec. 8th.

Junior guard Milee Enger was injured in the first quarter when at the time, she led the Hornets with 6 points. Her status is unknown for the Hornets’ next game, leaving the team with six players according to coach Bunky Harkleroad.

The Hornets, with only seven active players on the roster coming into today’s game, continued to struggle into the start of the second quarter, letting the Wolfpack go on a 10-0 run in the first five minutes of the quarter.

After a media timeout with 3:37 left in the second quarter, the Hornets responded to the Wolfpack with a 15-2 run to cut the lead to 38-37. The Hornets were able to get out in transition with 10 total fast break points in the quarter, and junior guard Emily Enchos and junior guard Summer Menke both had six points. Menke went 4 for 4 from the free throw line with three rebounds, with the Hornets going into halftime with the momentum.

@SacStateWBB Junior guard Summer Menke, who had a game-high 15 points and 11 rebounds, spoke after the loss to @NevadaWBB. @SH_Sports pic.twitter.com/odGSR46HB6

“We were already short at post, so we moved Emily from the post and back up to the point,” Menke said. “I had to step in as the post and that was new for me, I haven’t played that in all three years I’ve been here, so I had to step up and go in there but it worked out.”

Menke added that after the adjustments the Wolfpack made today, the Hornets need to come back and hit harder tomorrow.

Harkleroad described the difference between the first half and second half.

“A big part of it is mental focus,” Harkleroad said. “We did a better job getting to the free throw line and attacking wisely, the second period maybe fatigue affected our decision making in the second half because we definitely made worse decisions in the second half with the ball, we had a harder time scoring as a result.”

Menke also weighed in on what happened late in the game.

“Got a little messy with the ball and we started to throw the ball away and morale went down,” Menke said. “So we all just need to come together as a team, make better passes, cut harder, work harder and hopefully there will be a different outcome tomorrow.”

“Pass more, dribble less,” Harkleroad said after knowing the Wolfpack had 14 more assists than the Hornets.

The Hornets have yet to defeat an opponent this season and are looking for payback tomorrow when they face the Wolfpack again at 12 p.m. Sunday at the Nest.