Hornets came into the game with six active players 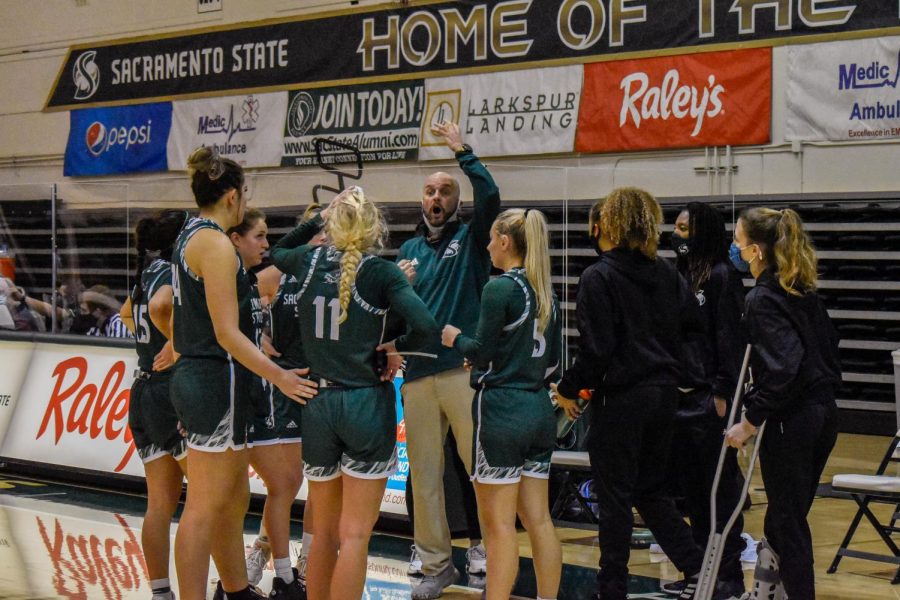 Coach Bunky Harkleroad discusses adjustments for the game to his players in the game against the University of Nevada at the Nest at Sac State Sunday, Dec. 13, 2020. Harkleroad said the team ultimately ran out of gas with only six available players.

The Sacramento State women’s basketball team played their second game of a back-to-back against the University of Nevada, losing 62-53.

The Hornets (0-3, 0-2 Big Sky) came into the game with just six active players after junior guard Milee Enger was injured in the previous game.

“We still don’t know how long exactly Milee will be out,” head coach Bunky Harkleroad said.

The Hornets struggled to make  basket early against the Wolfpack, missing their first five shots and having four turnovers in the first five minutes. The slow start allowed the Wolfpack to jump out to a 9-0 lead that the Hornets never overcame.

Harkleroad had a technical foul in the first quarter due to frustration with the refs.

The Hornets continued to struggle in the first half of the second quarter, letting the Wolfpack increase their lead to 27-11.

The Hornets had 11 turnovers compared to the Wolfpack’s five at that point.

“It kind of sucks only playing with six, but when you are out there with five other girls or four other girls, you are playing for the person next to you and for your coach and for everyone out there battling,” said junior guard Summer Menke.

Harkleroad said the team made special defensive adjustments to adapt to only having six active players, but it was ultimately too much to overcome.

“Division I basketball is really tough and to even attempt it with six or seven players right now takes a lot of heart and we battled and think it got the best of us,” Harkleroad said.

Late in the second quarter, the Hornets responded by stringing stops together and held the Wolfpack to a 1-10 shooting drought and cut the lead 29-21 going into the half.

At halftime, junior guard Emily Enochs had seven points shooting 3-of-7 and Menke had eight points off 4-of-8 shooting and also added five rebounds.

In the fourth quarter it seemed the Hornets could not get a stop, letting the Wolfpack increase their lead to 54-32.

The Hornets finished strong, ending the game making their last 8-of-9 shots but still losing 62-53.

@SacStateWBB Junior guard Summer Menke, who had a game-high 21 points and 13 rebounds, with back to back games with a double-double, spoke after the loss to @NevadaWBB. (part one)@SH_Sports pic.twitter.com/9tcPiwaw8X

“Summer [Menke] had a good game today,” Harkleroad said. “Summer has been a little frustrated with the shortage of numbers [players] and how hard we’ve had to battle here lately but Summer did a good job, she always plays hard for us and she’s getting better.”

When asked about what she has to do personally coming into these games, Menke said she has to step up in the post by getting more rebounds and to be bigger down low where she is still learning.

When talking about only having one assist in the first half, Harkleroad pointed to doing things with purpose, being mentally focused, passing quicker, cutting harder and tightening things up while their fitness improves.

“We’re gonna have to be physically and mentally tougher,” Harkleroad said

The Hornets are winless this season and are looking to get a win Dec. 18 against San Jose State at 5:05 p.m at the Nest.