Farouq Gidado encourages others to ‘always be about something’ 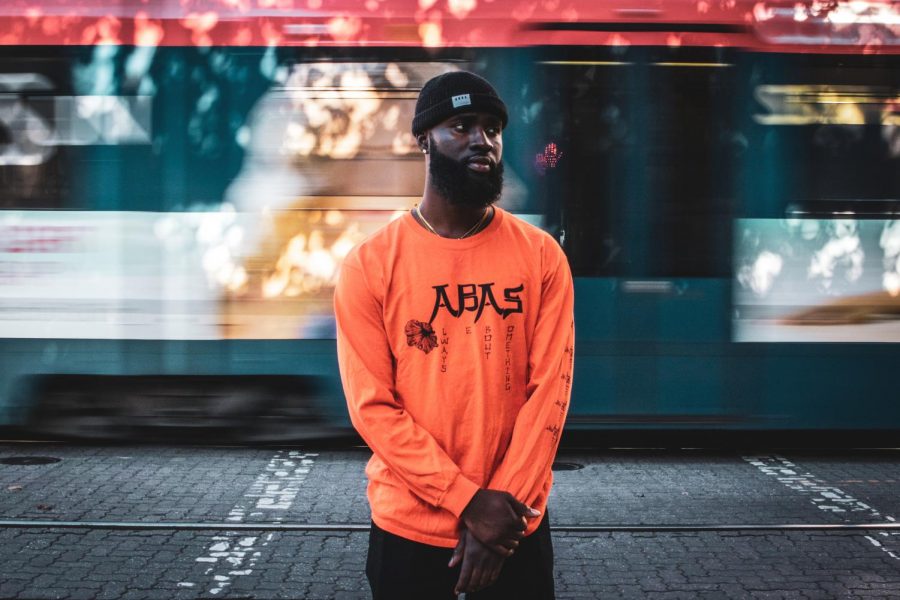 Farouq Gidado, founder and owner of ABAS Clothing, poses on K Street, as a Sacramento Regional Transit bus passes by in Downtown Sacramento Sunday, Nov. 22, 2020. The acronym ABAS stands for “always be about something."

Sacramento State sociology alumnus Farouq Gidado’s father always told him, “If you do something, make sure you do it well or don’t do it at all.”

Living by this all of his life, Gidado pushes that same mentality through his clothing brand, ABAS.

From a young age, Gidado was always passionate about clothes and fashion, but didn’t always have access to it. He said he recalls getting in trouble all of the time in his seventh grade science class for doodling shoes and clothes in the margins of his worksheets and binder paper while taking notes.

Originally from Nigeria, Gidado and his family moved to California when he was 8 years old. Being immigrants, he said his family didn’t have much growing up.

“Kids are mean, so you got made fun of for wearing Airwalks and stuff like that, but I’ve always been a kid that had tough skin,” Gidado said. “So I would draw things that I know nobody else could have and clothes that I know only I can see and only I can have access to. It was my way of getting back at the kids.”

From then on, the idea of making clothes never left him, but he needed a brand name first.

The acronym ABAS stands for “always be about something.” The term was created on the basketball court when Gidado was playing a game of pick-up with his friend, Brandon McGee, in high school.

“I’m just competitive, so I kept telling Brandon, ‘You’ve never been about nothing,’ and I kept saying that over and over again,” Gidado said. “And his response to me was, ‘No, I’ve always been about something.’ And then we stopped and looked at each other and were like, ‘Whoa, that’s fire.’”

After that, he and his friends started abbreviating the term and called their friend group the ABAS boys. Even though they don’t call themselves that anymore, Gidado said that everyone who was a part of it, at the time, has had “ABAS” in their Instagram bios for the last 10 years and have never changed it.

ABAS has over 4,000 followers on Instagram and is recognized in Sacramento. While most shop for the apparel online, the brand is also sold in the store Getta Clue located near the Golden 1 Center in Downtown Sacramento.

The urban streetwear brand aims to “fire up creative and individualistic minds,” according to its website.

“I love to see people chasing their dreams,” Gidado said. “The highest human act is to inspire, and that’s what I’m all about. So for me, being about something is to inspire and to motivate, and to get people into their journey.”

Loyal customer Airric Qualls doesn’t know the exact number of ABAS clothing pieces that he owns, but knows that that number is somewhere in the double-digits. Qualls said he really likes the message and what the overall brand stands for.

“In my career, I just want to make sure that I’m never quitting or never giving up, and that’s pretty much what his message is about,” Qualls said. “Whatever you want to do in life, just keep doing it and keep at it. Find something that you want to do in life and be about it. ABAS is so unique and it’s its own self and I don’t think much can compare to it.”

Each clothing piece is designed by Gidado himself. He said that most of what he makes is  a reflection of where he is in life. His very first drop was called Genesis which means beginning, while his second drop was called Kadima, which means “forward” in Hebrew.

When Gidado was young, his father started his own business selling African food and raw materials. Gidado said growing up watching his father’s business take off, all he saw were his successes.

“In my head, I just thought it was easy,” Gidado said. “But after my first drop, it was OK. I sold out, but it didn’t result in astronomical amounts of money like I thought it would and I kind of got discouraged. So for me to make the second thing, it was kind of like a note to self like, ‘Well, you’ve got to keep going forward.’”

Long time friend Jacarri Brown met Gidado in the dorms of Sac State in 2012 and said that Gidado always had a go-getter mentality. When the two lived together, Brown said he remembers Gidado experimenting with different bleaches and dyes to trial new ABAS clothing designs, which may have resulted in accidentally turning Brown’s white laundry pink from the red dye.

“He really started to study the game of what he wanted to do,” Brown said. “Because of the fact that he already had the backing, the only other thing he had to do was— he loved clothes, he loved fashion, he loved doing stuff like that— It was about putting his product into that.”

By putting all of himself into his clothing and striving to “always be about something,” Gidado is living out a childhood dream. From literally creating clothing on paper in middle school, he now  gives people a style and words to live by.