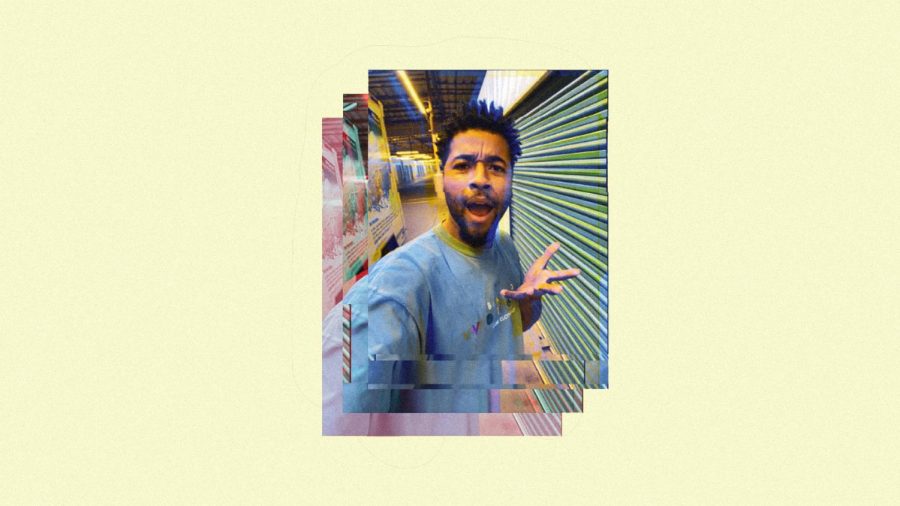 Kevin “Konkrete” Davis Jr. from one of his TikTok videos. Davis is taking a shot as a wild card contestant in Red Bull’s TikTok dance competition Dance Your Style Challenge. Photo illustration by Khalil Bourgoub.

From dancing with his Krump dance mentors to dancing with household artists such as Taylor Swift at the American Music Awards, Sacramento native Kevin “Konkrete” Davis Jr., 29, is taking a shot as a wild card contestant in Red Bull’s Dance Your Style Challenge, while giving an update on dance lessons and his debut EP, Cuffing Season.

The Red Bull Dance Your Style Challenge is an online TikTok dance competition for dancers to participate in to try and win an invitation to the Dance Your Style World Final, which is tentatively planned to be happening in person at the end of 2021, according to Red Bull’s website.

Question: Could you give us a little biography of yourself? What are some of the projects you’re working on?

Answer: I have a lot of projects coming up, but the most significant ones that I’ve been working hard on — one of them is my online Krump program that I just started last month. I actually sold it out, which is only 50 students, and they pay a fee and they spend time with me for a month, three days a week. It’s called the Wildlyfe Krump Program and I just give them the insights of Krump and how to think and how to move. But you can only do so much online, over Zoom or over FaceTime.

My biggest accomplishment right now is I’m dropping my first project as far as music. Music was my first talent I ever had, but I always did it for fun because I just loved music and that’s what introduced me to dancing. Not only that, something that’s significant about the project is that I’m actually doing that with a family member, my cousin, and we’ve been doing music since we were kids. So we are releasing our first EP and we’ve been dropping new music every week for the past seven months. My cousin’s name is Terence Simien and he is the best rapper in Sacramento by far and the project is called Cuffing Season. It’s something people can relate to. It’s R&B and hip-hop.

Q: How did Krump dancing get started, when and where, and how did you get involved in it?

A: Krump dancing is my style of dance and we didn’t change the meaning, but the more we do it we begin to know what it really is — and it’s just expression and rhythm. High expression, high energy, all in rhythm. I’ve been doing it since I was 16 and the dance was created in southern California by my mentor Ceasare “Tight Eyez” Willis and Jo’Artis “Mijo” Ratti. Those two created the dance back in ‘99 and they are known for the movie “Rize.” That really put Krump on the map. I moved to LA and he [Tight Eyez] took me under his wing and I’ve done shows with him like ABDC [America’s Best Dance Crew].

I think the biggest job I’ve done with the creators of Krump was with Taylor Swift for the AMA’s. It was me and my bro, “BDash,” as a duo, and we got to dance with our teachers with Taylor Swift on stage for the AMAs. That was one of the biggest accomplishments that I’ve ever had in Krump. I could be done after that. That was super dope. I’ve danced with Chris Brown too and some other celebrities, but to dance with your teachers and your bro, it was like, “Oh, we’re good. I’m good. We can go home now.”

Q: What have you been doing to grow your following on TikTok and your standings in the Red Bull Dance Your Style Challenge?

A: I’ve been practicing. I haven’t been practicing for any battles recently, but to better myself I’ve been practicing. To grow my fan base, I’ve been doing more personal videos aside from dance videos, like having them be on the journey with me. They [Red Bull] gifted me a participation gift basically and that was really dope to me. It really lets me know that they care about the dancers. They gave me a gift that made it real convenient for me to make my videos easier. And doing it on TikTok, it’s one of the greatest sources for art right now.

Q: What was the participation gift?

A: They sent me a speaker. The speaker I have already is trash, so this one was way better. Then they sent me, I think it’s called Pivo if I’m not mistaken, but it’s a device that does auto face tracking. So where you go, the device moves with you and can track your movements. Now I don’t have to stand still if I’m doing regular videos. It’s like an invisible camera man, so shout out to Red Bull for that.

Q: Could you describe your standings in the competition right now?

A: We’re anticipating on who’s making it past this round. It’s just displaying the dancers right now and I’m looking at the people that are in it right now like, “Oh this is crazy.” I still have to see what’s going to happen after they look at our videos that we have to send in. So you caught me on a real, not nervous vibe, but I’m anxious to see who’s going to the next round.

Q: How has your dancing style evolved over the 14 years you have been dancing?

A: Krump was really energetic still. I can’t say it had more energy, it’s just the movements were more simple back then. We didn’t have many movements to work with, but there were still key movements that we do today that still makes it known as that style. We have something called the gallop or buck hop, chest pops and arm swings. Those are the key movements that let you know, yeah that’s Krump, or how we are doing it. It lets people know OK, that’s the style of Krump. Today, man it’s creative, there’s isolation moves in there, people are doing these hat tricks and shoe tricks. But right now, it’s going back to its purest form without the tricks, with more knowledge and more creativity. It’s harder to judge a battle now. It’s so hard to judge battles now, as far as Krump battles go.

Q: How do you see your dancing going forward? Are there any goals you have for yourself in the future?

A: My biggest goal right now, is to provide opportunities for dancers to dance with artists, and not just have my circle of dancers. I want to give everybody a chance to dance with an artist, since I tap into my music, I did it before and it works, I want to teach my classes before a concert, and actually pick dancers from my class and have them dance with me within the next day at the concert. That’s something I’ve been dreaming about, just to pull dope dancers to dance with me at a sold-out concert. I did it before for World of Dance, of course they didn’t know the songs, a few of them did, which was like “oh this is dope” but I taught a class and I pulled the dancers that I liked from the piece and they did the piece the next day on stage live with me. That’s what I want to be known for and I want to be the first artist to teach classes and pull dancers from there to get them on stage with me, because there’s a lot of dancers out here and I’ve gotten the real crazy end of the stick as far as auditions, people want to have their core dancers so I’m going to start picking the talented dancers, so that’s a real goal I have that I am speaking into existence right now.

Konkrete’s first dance battle went live on Red Bull’s website for viewers to vote on moving forward to the final battle on Dec. 10.