OPINION: The NFL has fumbled the ball with its handling of COVID-19 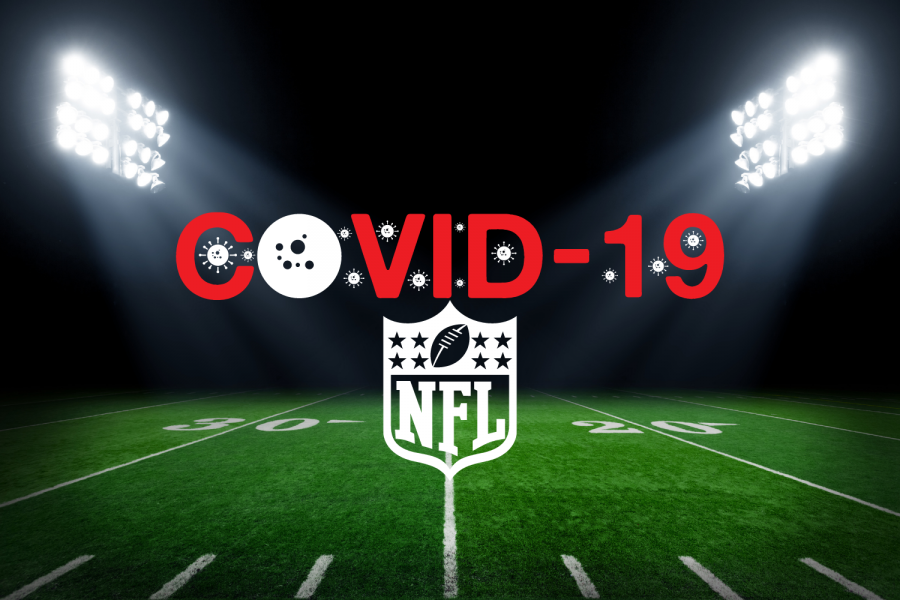 Graphic made with Canva.

The NFL has seemingly taken a trial and error approach with COVID-19 safety this season, and it’s going about as well as you’d expect.

Instead of taking the bubble approach to the season like we saw in the WNBA, NHL and NBA or even the approach the MLB took by limiting travel and setting a bubble for the playoffs, the league decided they’d proceed as if things were normal while testing players daily. The NFL league office is to blame for their lack of preparation and carelessness when it comes to stopping COVID-19 spread among the players.

The NFL needs to act now and put in enhanced safety measures that will keep their players safe. Without it, we may be headed towards a playoff disaster in which outbreaks could end a team’s season due to competitive disadvantage.

The league’s lack of planning and awareness of how quickly the virus can spread has come back to bite them in short order. Just this past week, 18 players of the Baltimore Ravens were placed on the reserve/COVID-19 list after multiple players tested positive, the Broncos were forced to play with a practice squad wide receiver at quarterback after starting quarterback Drew Lock exposed the entire quarterback room and the Steelers matchup against the Ravens has been postponed for the third time due to the number of positive cases on the team. It’s truly hell in New York right now.

To make matters worse, one of the Ravens players who tested positive happens to be tight end Mark Andrews, who has Type-1 Diabetes, putting him at risk for severe complications from the virus. Meanwhile, instead of canceling the game, the NFL continues to push on, further risking players and coaches from both teams.

NFL made the Patriots fly to Kansas City just 5 hours before, WITHOUT their starting QB.

NFL made the Broncos play with a practice squad WR at QB, giving the Saints an EASY win.

But the NFL will postpone the Ravens & Steelers game THREE TIMES? That makes a lot of sense…

This has led to multiple games being canceled in order to accommodate all teams in the situation. However, the NFL is often forcing teams to play at a disadvantage because even if a player tests negative, they need to go on the COVID-19 list if they’re deemed a close contact of the infected player.

Meanwhile, the league has continued to dole out meaningless fines to coaches not wearing masks on the sidelines, despite Saints players celebrating without masks in the locker rooms. I just think that’s pointless because the players have already been in close contact and practically are like family since they see each other six days a week. If there was a bubble, fines wouldn’t be needed, but what do I know? Why punish teams when the league is at fault?

It didn’t have to be this way. The NFL league officials should’ve set up a bubble environment for teams to play in during the season. They had between February and August to craft a plan to limit the pandemic’s impact on this season, but instead spent the whole time in their fantasy land that often prioritizes money over concerns of players.

How do I know this? 66 players opted out of the NFL season because they had coronavirus concerns. Before training camp even started, players took to social media in unity to express their concerns over the way the league was handling the situation.

If #AdamSilver can respect the voices and protect his @NBA players why can’t @NFLcommish do the same? Listen to your players. If we want to have a full season it will have to look different with OUR safety as the priority. @NFL make the necessary changes. #WeWantToPlay

The NBA bubble lasted over 90 days and not one positive test was recorded after thousands of tests. The MLB avoided a major outbreak early in the season and completed an expanded postseason without any major bumps.

I understand that the NFL is bigger in the number of teams, players and team officials on a team compared to a sport like basketball, but that doesn’t mean they should’ve mailed it in and decided to proceed in this way. Now you have 32 teams with 53 players on each active roster in addition to the practice squad players that each live a different life coming in contact in one facility. Each player doesn’t know how the others act when they’re outside of the facility.

It was up to the NFL to install a plan to promote the health and safety of players and team officials, and they failed. I will admit, the one thing they got right was making every player get a PCR test daily in order to catch positive tests, but that’s just not enough now that prominent scientists have come out and said that a negative test may promote a false sense of security within people because testing negative doesn’t mean you’ll continue to test negative in the days following.

It’s a complete trainwreck at this point, and a disaster that has come at the worst time considering there are only four more weeks left in the regular season. However, this isn’t the first time this season the NFL has dropped the ball.

In Week 4, the Patriots and the Chiefs were scheduled to play each other on Sunday Night Football. The Friday before the game, Patriots starting quarterback Cam Newton and the Chiefs practice squad quarterback tested positive for COVID-19 and were subsequently ruled out for the game and placed on the teams COVID-19/reserve list.

The game was pushed back a day and the league forced the Patriots to fly to Kansas City just five hours before the game, which put them at a competitive disadvantage to begin with. Just days later, Patriots starting cornerback Stephon Gilmore and two practice squad players tested positive for the virus. Turns out, Gilmore went to dinner with Cam Newton before the game. It was baffling at the time that this major development received such little media attention considering that Gilmore probably played while being infected which put other players at risk.

Now, the NFL faces a crisis. Will they now put their pride aside and take the proper steps in order to get the season back on track? Or will they risk becoming another pandemic casualty? The choice is up to NFL Commissioner Roger Goodell and his medical experts to make this right, and they’d better hope they do it soon.