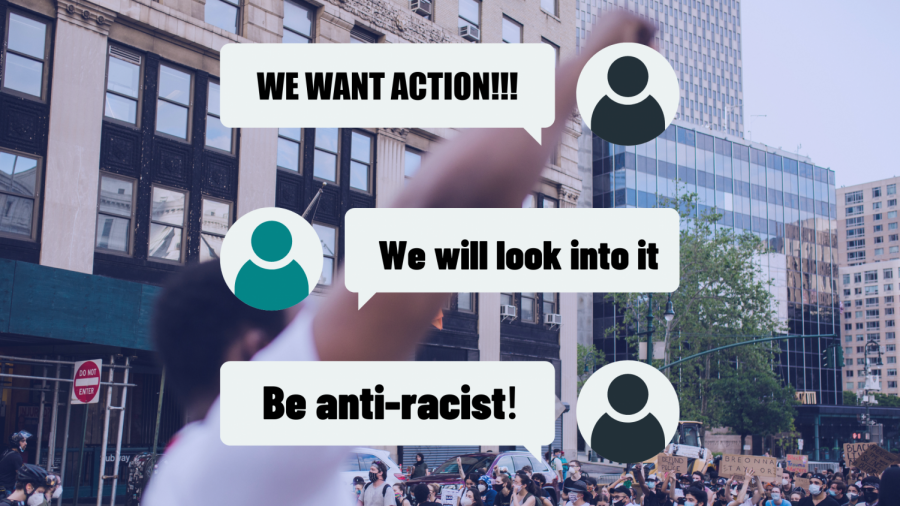 Sac State officials claim an investigation into the racial slurs in the Zoom chat of the UNIQUE talent show Thursday, Dec. 3, 2020 found the users were not local and could not be tied to the university. “What I’ve noticed when it comes to these incidents, there’s not really a valid response or action being taken, we’re allowing this to become normal,” said child development major Kameya Turner.

After racial slurs were used in the chat of UNIQUE’s Zoom talent show Dec. 3, sophomore child development major Kameya Turner said that Sacramento State is beginning to become desensitized toward the issues its Black students face.

“What I’ve noticed when it comes to these incidents, there’s not really a valid response or action being taken, we’re allowing this to become normal,” said Turner, activities coordinator for Sac State’s Black Student Union.

Turner said that she knows racism can’t be erased overnight but she feels oftentimes that nothing is done to combat racism when it comes up.

“I know it’s going to take a minute for the campus to be anti-racist, but what are we doing in the meantime?” Turner asked.

The racial slurs and racist comments in the talent show chat were sent as the judges were on the brink of deciding a winner, according to judge for the talent show and environmental studies major Jasmine Owens.

The Zoom participants that posted the racial slurs went by the usernames “David Winley” and “Mike Nicholas.”

Owens said it was the comment made about the death of George Floyd that upset her even more than the first comment that included the use of anti-black slurs.

“It wasn’t even the first comment, I feel like I hear that all the time, but to hear that about George Floyd, that really hit something deep in me,” Owens said.

A few viewers left the stream once they saw the racial slurs in the chat. Owens said at the least, she wanted the comments to be acknowledged by UNIQUE at the end of the talent show for the people remaining in the Zoom event.

“When something like that happens, especially if it causes a certain number of people to leave the show, it needs to be acknowledged,” Owens said. “That’s insulting a lot of people.”

Owens said that she wants there to be a conversation about how events like this can be addressed and what steps need to be taken in order to prevent situations like this in the future.

Brian Blomster, director of news and communications for Sac State said in a statement to The State Hornet that the university’s Information Resources and Technology department  investigated the incident and came to the conclusion that the offensive remarks were not local users and could not be associated with Sac State.

Senior biology major Elijah Mitchell said he is skeptical of Sac State’s investigation because they have a poor track record when it comes to dealing with acts of racism.

RELATED: ‘You were my bullies’: Sac State theatre and dance students confront faculty over systemic racism

Mitchell also said that regardless of if the users who left the racist comments were Sac State students, he wants to see more from administration and is upset that President Nelsen has not yet addressed the situation in an email.

“I have no faith in the ability of our institution to be that moral compass,” Mitchell said.

“If it was something they felt strong about, something definitely would’ve been done about it,” Grady said.

Hakeem Croom, programs coordinator for the Martin Luther King Jr. Center at Sac State, described the Zoom incident as an example of retraumatization.

“It’s peeling back scabs and wounds that we already have, we’re literally coming off of the [Tim Ford] situation, and then we have stuff going on in the theatre department with the ‘BE FREE MOVEMENT’ and it’s just reaggravating and causing hurt and harm,” Croom said.

In May, a video of Sac State economics professor Tim Ford and his wife, Crystal Ford, went viral after it showed Crystal saying racial slurs at their neighbors.

Croom said that there is a lot that needs to be done on the faculty side to create an inclusive and equitable environment for Black students and that Sac State is several years away from getting that environment to where it needs to be.

Croom also said that people often assume that faculty and staff at Sac State have a certain level of understanding and compassion towards issues of racism, but that many of them do not.

“They’re just people with Ph.D.s that are smart, they don’t know how to empathize or know what a microaggression looks like,” Crooms said. “There are thousands of people in faculty and staff with varying levels of knowledge in this area and so now we have to work to bring everybody to a shared understanding of what diversity is, what inclusion is and what anti-racism is.”

Owens expressed she was not happy with how the talent show ended. She felt like the coordinators of the event should have addressed the comments in the chat when they noticed it, but instead it felt like it was swept under the rug.

After the talent show, Owens said that the UNIQUE group chat discussed the racist comments but a few of her peers felt like they shouldn’t give any attention to the situation or pay the comments any mind.

“We don’t have to give energy to our oppressors but the discriminated deserve the ability to hold accountability,” Owens said. “This just isn’t sitting right with me.”