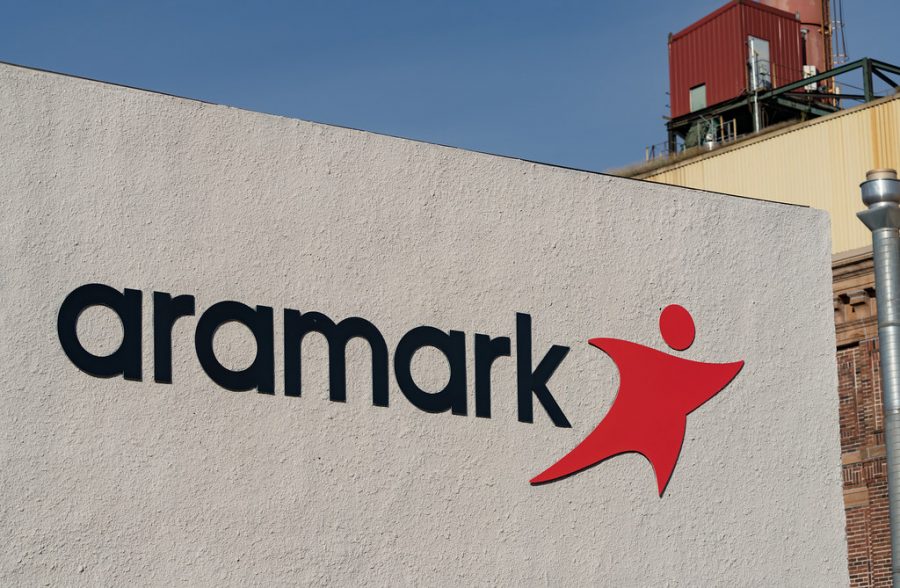 The Aramark and AmeriPride building in Hibbing, Minnesota on Oct. 4, 2020. The food service company is planned to take over University Enterprises, Inc.’s dining operations July 2021. (Photo by Tony Webster/ CC BY 2.0)

Reinhart said students’ needs and demands called for more variety in eateries, compliance with sustainability policies and dietary options such as vegan, vegetarian and gluten-free food.

Reinhart said in order to continue employing 500-600 students every semester with the $1 annual minimum wage increase, the organization needed to rethink its food operations because  UEI is a small, self-supporting organization that doesn’t receive mandatory fees from students.

“There’s a perception that food service is a big money maker, but after labor and food costs, there’s very little left over for overhead in covering rent, insurance, taxes,” Reinhart said.

Reinhart said after the pandemic forced the campus to close, UEI decided to follow a trend of CSUs outsourcing their dining operations.

Out of four companies that responded to UEI’s request for proposals about outsourcing dining operations, Reinhart said Aramark’s 90-minute presentation scored the highest out of three final presentations amongst a thorough evaluation conducted by a 15-person committee.

The 15-member committee was composed of multiple campus stakeholders including:

In September’s UEI board meeting, Aramark’s six-month evaluation was authorized and contract negotiations were allowed to commence. Negotiations will most likely be finalized in December according to Reinhart.

Reinhart said Aramark’s buying powers as a national company allow for them to receive higher quality food at a lower cost since they already provide food to hospitals, elementary schools, assisted living centers and other colleges. Aramark already serves other CSUs such as Fullerton and Cal State East Bay.

“They have good benefit programs, growth opportunities and they’re also expertised in working with representatives of unionized employees,” Reinhart said.

“Funny enough, in the last satisfaction survey that we conducted last fall, Habit Burger and Pieology both came in rated as the highest in brands that our students wanted to see,” Rader said. “That’s why it was nice and ironic to see that in Aramark’s proposals, it’ll be a nice enhancement for those who wanted it.”

According to Reinhart, after Burger King gave a short notice it would not return to campus, a UEI self-operated business Buzz Burger was put in place without the renovations it needed. Assuming that the campus is allowed to return in fall 2021, Reinhart said renovations would not be done until 2022.

Here’s what Reinhart said will be expect soon at campus:

The Habit Burger Grill is expected to replace Buzz Burger
Panda Express in the Riverfront center will be replaced by Pieology
Burgess Brothers BBQ & Burgers will soon be expected to be integrated into athletic game food services because of Aramark, bringing their signature “ChurWaffles”

Lawrence Charles, a sophomore communications major, said he would have liked to have a Little Caesars on campus because it offers quality for an inexpensive price as opposed to Round Table.

“I’m fine with the Buzz Burger being replaced because I don’t really go there and I’ve heard The Habit is pretty good,” Charles said.

Charles said he was happy to hear that one Panda Express is going to remain in the student union because that was his favorite place to go, but that while he’s pretty happy with the eateries, there’s room for improvement.

“The Roost kind of feels like a discount version of Chick-Fil-A,” Charles said.

According to Reinhart, beer sales will still be available and food trucks will continue with their usual operation by contract through SactoMoFo Corporate Catering. Subleased operations such as Round Table, Jamba Juice, Saigon Bay and Gyro 2 Go will not be affected as they are not operated by UEI and Reinhart said they will continue to be here next fall.

Social work major and senior, Iris Chavarria, said she often utilized the food court options in between class session gaps because she used to commute to Sac State.

“There’s a lot of places in the Union, but you’re really limited to a few places like Panda, Baja or Mexican food that isn’t that good,” Chavarria said. “I feel like there’s no flavor anywhere.”

Chavarria said she would have liked to have seen more Black and Latin-owned food businesses, and to have more space for eating as she always found the Riverfront center to be packed with students around noon to 1 p.m.

“It’s better late than never,” Chavarria said. “It sucks that we’re not going to be able to utilize those options, but in the long run it’ll be better.”

At the point of interviewing, Donna Walters had not resigned yet as ASI executive vice president.