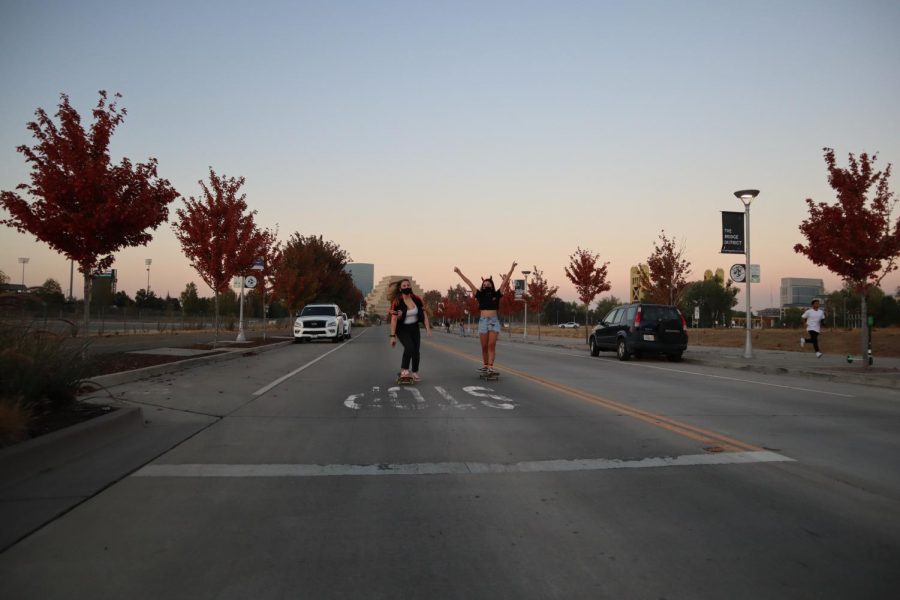 Around 24 women cruised on skateboards and roller skates down Riverfront Street in West Sacramento as the sun set the day before Halloween, some dressed in costumes like the bride from “Kill Bill” and an inflatable tube man.

Sacramento State public relations major Kristine Yabumoto said she and co-founder Audra Fallin started the group Sk8 916 in September 2019 to create a safe environment in Sacramento for women, minorities and members of the LGBTQ+ community to skate together.

“I wanted other women to skate with, and it just felt like I had no one to skate with and I couldn’t find any skate squads in Sac, so I decided, why not me start one?” Yabumoto said. “We didn’t always feel comfortable going to the skate park, so we wanted to create an environment where people can feel safe.”

Yabumoto said she and Fallin started holding bi-monthly group skates and selling Sk8 916 T-shirts at their meetups to raise money for the organization Women Escaping a Violent Environment in Sacramento and to purchase extra skateboards for members who need them.

Meetups are usually held in West Sacramento on Riverfront Street because the smooth pavement is ideal for beginners, Yabumoto said.

“Sometimes people are really new to it so we’ll hold their hand and really help them out and by the end of our group skates, everyone is skating which is great,” Yabumoto said.

When COVID-19 hit earlier in the year, Yabumoto said the group stopped hosting meetups regularly for a while.

“I think as the months went by I thought about it,” Yabumoto said. “Skateboarding is a very singular activity, and we’re usually six feet apart anyways, so I think we needed to keep them going because people need that outlet.”

Sk8 916 also encourages wearing masks at its meetups in its Instagram posts.

After Fallin posted a viral TikTok about Sk8 916 in August, the group’s Instagram account gained around 1,000 new followers, Yabumoto said.

At the Oct. 30 group skate, high school senior Madalyn Burke said it was her first time attending one of Sk8 916’s meetups after the group popped up on her TikTok “For You” page.

“It was an all female group, with a sport that’s usually dominated by males, so it was really interesting that way,” Burke said. “I never knew we had Sacramento skate groups.”

Yabumoto said most of Sk8 916’s group skates are only for women and members of the LGBTQ+ community to maintain a safe space for social minorities, but sometimes the group welcomes male allies, like at its anniversary skate Sept. 16 this year.

Are you kidding? One whole year of sk8 916?! We can’t believe it🖤 We can’t tell you how thankful we are for all of you believing in us and cheering us on the past 12 months. Without you all, this wouldn’t be possible, so we‘re celebrating our growing community with an all inclusive group skate on Saturday 9/19 🎉 Schedule + location TBA. Come skate with us and have a good time!🎂 Male allies welcome🛹 *don’t forget a mask!*

Cortney Kesterson, 28, said she has been involved with Sk8 916 since its first meetup after the group showed up as a suggested account on her Instagram.

“Kristine and Audra, they’re just super welcoming,” Kesterson said. “I had always wanted to have a group of people to skateboard with, but never really had anyone.”

“I like all the fun places you get to see in Sacramento,” Bruno said. “We’ve gone West Sac, Old Sac, places downtown, just kind of seeing all the little bits of Sacramento with your friends and doing something you love while skating.”

Yabumoto said she hopes that Sk8 916 can create mentorship programs in the future and expand into different chapters in northern California, such as in Stockton and the Bay Area.