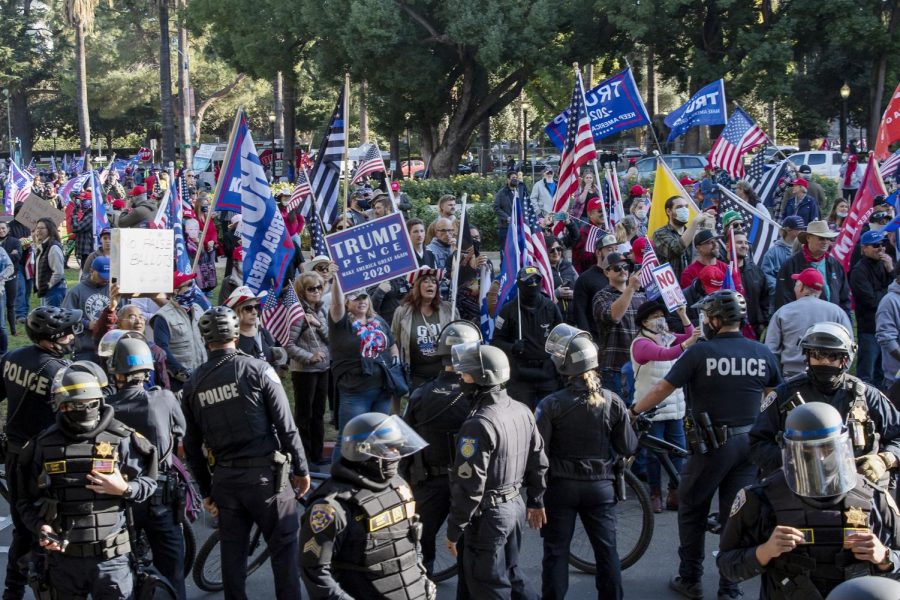 Like many other small business owners, Diego Martinez’ bail bonds business was shut down due to the lockdown put into place by Gov. Gavin Newsom in March due to the pandemic, so he went out to protest at California’s State Capitol on Saturday.

“It is not fair that we are out here trying to work being tax-paying people but we can’t go to work yet our governor shuts down the State Assembly people and doesn’t let them go to work but they’re still getting paid,” Martinez said. “What about the average folk that are losing their livelihood?”

The “Recount America and Anti-Lockdown” protest was promoted by the Freedom Angels, an anti-vaccination group, at California’s State Capitol on Saturday.

Gavin Newsom is preparing to shut down California yet again.
We will be protesting the lockdown and the fraud happening in our state. Join us and organize

A counter-protest was promoted by Antifa Sacramento, which called for an anti-racist demonstration at the same time as the Recount America and Anti-Lockdown protest. The group called for participants to cover up and “to stay tight with your crew.”

And here is our alert we put out for tomorrows (11/14) MAGA cospiracy theorist lead demo! For the counter demo tomorrow – remember covering up, staying tight with your crew & building a strong line of defense is important in keeping each other safe!https://t.co/q3uov0lmaw

At one point two smaller groups of protesters including some dressed as members of the “Proud Boys” faced off on the west side of the Capitol lawn and a brief altercation ended with a Trump supporter discharging a large can of mace towards counter-protesters.

“There are people out here protesting the local lockdown,” said Sacramento resident Lisa Welga. “The governor, he just came out, admitted he made a mistake by having 12 people in his home to have a party while he locked us all down.”

Newsom and at least 12 others gathered at The French Laundry Nov. 6 to celebrate the 50th birthday of Axiom Advisors lobbyist Jason Kinney, as reported by the San Francisco Chronicle. The governor has since apologized.

“While the First Partner and I followed the restaurant’s health protocols and took safety precautions, I should have modeled better behavior and not joined the dinner,” Newsom said in a statement.

Welga stated that she attended the protest to show support to President Donald Trump in making sure that the U.S. has a fair election.

“As far as the president goes we are huge supporters,” Welga said. “We look at the abnormalities in what happened in this election. If this had been a real blue wave, that would have given Biden the presidency. You would have seen that across the board with the congressional seats and Senate seats.”

Martinez, who plans to run for governor in 2022, said he does not see a benefit in the lockdown because it is causing an increase in suicides, depression, divorces and alcoholism.

Centers for Disease Control and Prevention stated in their Morbidity and Mortality weekly report from June 24 to 30 that mental health challenges  are related to COVID-19 and mitigation activities, including the impact of physical distancing and stay-at-home orders.

The majority of husbands and wives report that their marital unions are stronger in 2020 according to the American Family Survey conducted by Deseret News/Center for the Study of Elections and Democracy in July.

Martinez said he believes the spike in cases is due to increased testing, something President Trump has said repeatedly since late October and has been proven to be factually incorrect.

“Is it because more people are getting tested and are actually proven to actually have had it or are they carriers of the disease?” Martinez said. “See, that data is not given to us. So for us to sit here all spiked up, well the testing has spiked up.”

The 7-day average of percentage of positive tests has gone up from 6.6% on Nov. 1 to 9.5% as of Saturday and hospitalizations have risen to their highest 7-day average since the pandemic started with over 64,000 people hospitalized.

Stephanie Suela, Sacramento County coordinator for the recall Gavin Newsom campaign, said many people in California do not approve of Newsom’s policies and executive orders.

The Sex Offender Registration Act is an existing law that requires that a person convicted of certain crimes to register with law enforcement as a sex offender while residing in California or while attending school or working in California, according to California’s legislative information website.

Suela said she opposes the bill passed by Newsom because it does not require a person who committed and offense with a minor to register as a sex offender if they are less than 10 years older than the minor at the time of the offense.