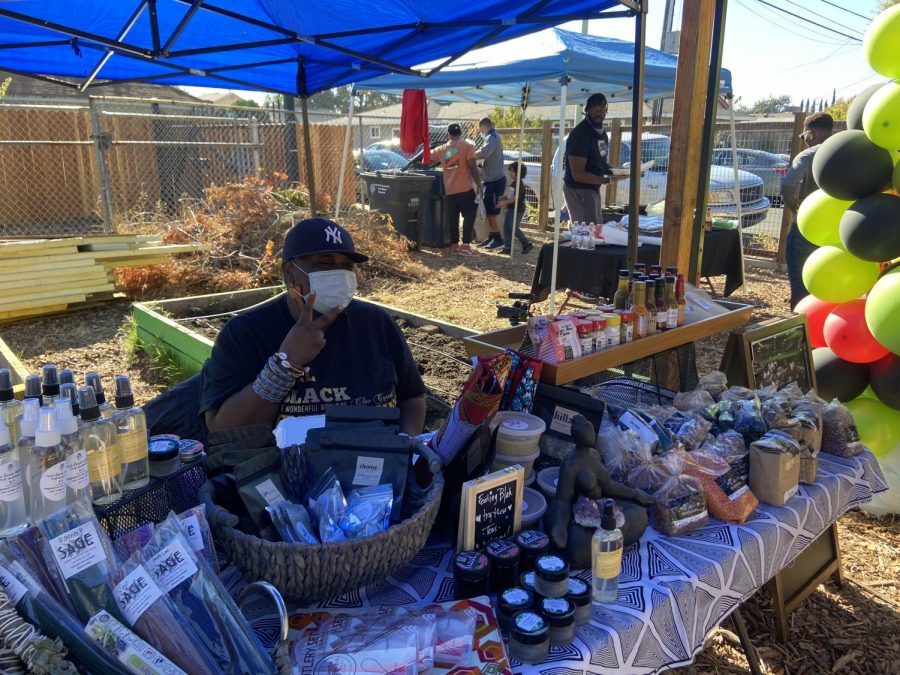 Cleo Cartel, owner of Momma's Market, sells her specialty goods from all over the world at the Sankofa Market in Sacramento on Sunday, Nov. 15, 2020. Cartel mainly caters her products to people of color and said she understands and values this market because it gives entrepreneurs an opportunity to profile and sell their products.

Sacramento State student and rapper Greo the Storyteller and her partner Deborah Armstrong became the initial organizers and developers of the Sankofa Market in an effort to bring Black entrepreneurs together to provide access to good-quality fresh food and natural hygiene products in an area that is considered a food desert.

A food desert is an urban area that struggles with access to affordable, good-quality fresh food. Food deserts in Sacramento are located primarily in low-income neighborhoods. For people who live in the heart of Sacramento, there are an abundance of affordable grocery stores that are accessible via public transportation or walking. Low-income neighborhoods that are on the outskirts of Sacramento have little to no affordable grocery stores.

Armstrong and Greo not only emphasized the importance of bringing awareness to the food desert issue in Sacramento, but said that with this market they also plan to give people of color a fair opportunity to be represented in their own neighborhood.

“Greo and I both really like going to farmers markets,” Armstrong said. “There’s a lot of farmers markets in Sacramento, but unfortunately there’s really low representation. You will go and you don’t see a lot of Black people there, or you don’t feel as welcomed.”

Armstrong said Black vendors are usually outnumbered and overcharged at other farmers markets.

“We have friends who want to vend and at those markets there’s often really high vendor fees, so it tends to be exclusive of the Black community,” Armstrong said.

Senior Sac State student, entrepreneur and former BSU president Adwoa Akyianu said she found out about the Sankofa Market through Greo. At the time, she saw the flyer on Greo’s social media inquiring for vendors at the event. Akyianu is the owner of She Has Shea, an all-natural, vegan, shea butter line that caters to melanated skin.

Unlike the Midtown Farmers Market in Sacramento that charges vendors a $30-$60 daily fee for vendors, Akyianu said the only thing required for vendors to be a part of the Sankofa Market is a $10 waiver fee.

“For me, it’s about exactly what Sankofa is, which is just looking back to move forward, understanding what traditions that we had prior,” Akyianu said about the event. “One of the strongest things that will take place in the Black community is Black economics, which is buying and sharing from each other. If I’m buying something from her, she’s buying something from me. We’re keeping the dollar cycled in the Black community.”

Cleo Cartel is the owner of Mommas Market, a specialty store with ingredients from all over the world. Cartel has owned her own business for twenty years now, yet she said she still understands that events such as the Sankofa Market are important for the Black community.

“It’s especially important nowadays, because it gives entrepreneurs a platform to really profile and sell their products without having to compete in these large markets,” Cartel said.

For first-generation farmers like Nate Brown, who owns Brown Sugar Farm in Citrus Heights, the Sankofa Market was an opportunity to branch out and reach different markets while also being able to give back. Brown was a part of the original group of organizers that helped the  market come together.

“We really just did a Zoom call and talked about all the things we wanted to see at the market, all the different ideas we had, what kind of people we wanted and the vibes we wanted to set,” Brown said.

Brown said the market’s turnout has been coming together better than the group expected.

“The vibe is set how we wanted it, but I think it’s just getting even better than we expected,” Brown said.

Expect to see the Sankofa Market every second Sunday of the month moving forward at Greentech Farm in Sacramento from 10 a.m. to 2 p.m.