Team does not currently have any positive cases 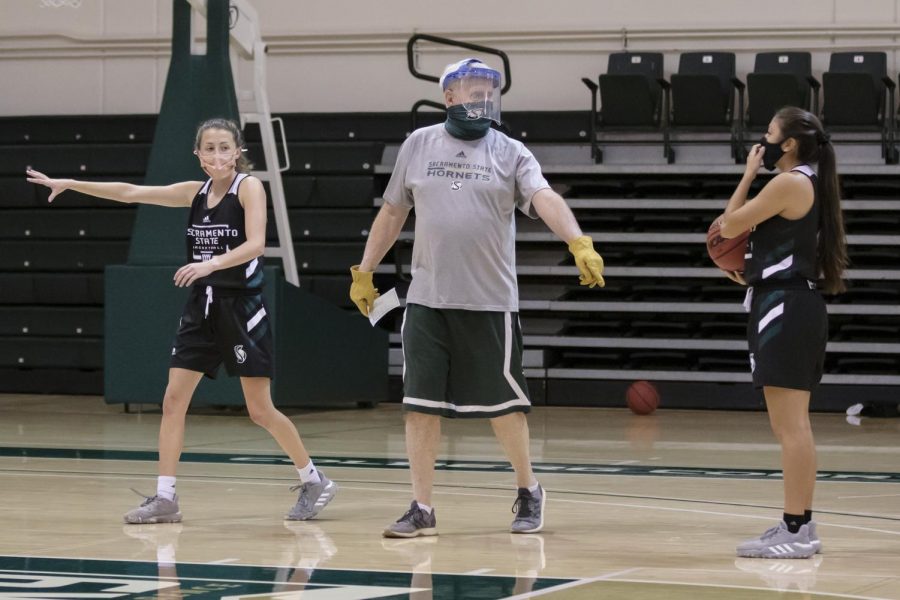 Assistant Coach Bill Baxter, center, tells Milee Enger (1), left, and Jazmin Carrasco (4) where to go for this play during the women’s basketball team practice at The Nest at Sacramento State Tuesday, Oct. 27, 2020. The teams first game was scheduled for Monday, Nov. 30, 2020 was cancelled because of a possible coronavirus exposure.

The Sac State women’s basketball team has waited nine months to play a basketball game, but they will have to wait a little longer.

The team’s scheduled opener Monday against William Jessup University was canceled due to possible exposure to coronavirus as there was a contract tracing issue with William Jessup, said Brian Berger, Sac State assistant athletic director.

“It’s a bummer for sure,” said junior guard Jazmine Carrasco via text message. “We were all looking forward to our first game but we understand why it needed to be cancelled and hope everyone is safe. We’re just going to continue to practice hard and hope to play soon.”

According to the Sac State athletic department, no player on the team has tested positive.

Sac State’s next game is scheduled at the University of Idaho Thursday and the cancellation of Monday’s game will not have an impact on the Hornet’s match-up against the Vandals, Berger said.