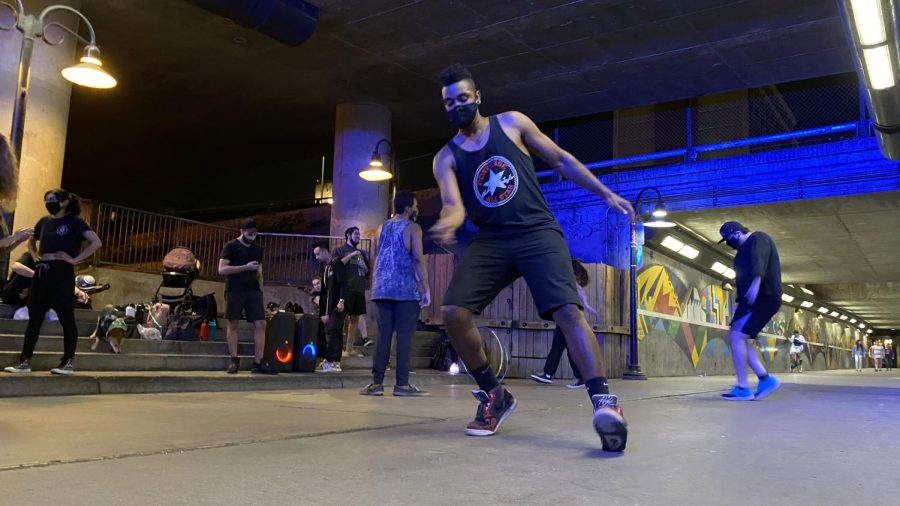 The thumping bass of electronic dance music echoed throughout the Old Sacramento tunnel on K Street, bringing back the familiar sound of pre-pandemic festivities. A group of EDM-enthusiasts meet at this spot once a week to recreate the energy of dancing at concerts in their absence.

Sac EDM Collective meetups are open format with a casual feel. People of all ages, backgrounds and skill levels are welcome to drop in at no cost, making it a safe haven to try something new and exchange creative expression.

“Music and dancing is a form of a language,” Jose Zaragoza said. “It’s kind of like, you know how people have sign language with hand gestures? Well with the EDM culture, we kind of take it to the step of sign language with footwork.”

Zaragoza, an avid fan of the meetups, said he started dancing when he was a kid. It was when he started going to clubs as an adult that he had the idea to learn more about shuffling.

“I started doing Latin music such as the typical traditional Latin music, Mexican traditional music, Aztec dancing and also hip-hop,” Zaragoza said. “As I’d gotten older and started approaching the nightclub scene, that’s when it started taking full effect. One of the main songs that kicked off my shuffling enthusiasm was from LMFAO, ‘Party Rock Anthem.’”

Shuffling is a type of dance style that is popular in club scenes that feature electronic music. It  typically features fast-paced footwork in a heel-toe movement that can be modified in a variety of ways.

Zaragoza said that learning shuffling was a way for him to feel more comfortable being socially outgoing. After seeing a Facebook post about other shufflers in Sacramento wanting to meet up, he said he jumped at the opportunity.

“Before the pandemic, we would always meet at the club or at an event and I would always see familiar faces. That’s the only way that we got in touch,” Zaragoza said. “Since quarantine happened, that basically diminished. We were just stuck at home with the need of like, ‘I want to go listen to music, I want to go shuffle,’ and we didn’t have that. Due to this group, we have the ability to basically go and dance and shuffle.”

Kevin Pham, a Sac State alumnus, organizes and hosts the dance meetups at the tunnel on K Street every Monday from 7 p.m. to 9:30 p.m., weather permitting. After attending his first EDM concert a few years ago, Pham said he discovered that there is more to rave culture than just partying.

“I’ve been shuffling for about four years now and it honestly changed my perspective in terms of going to shows,” Pham said. “It’s about expression. It’s about creating something so beautiful and so personal. There’s really no such thing as bad music or bad style. It’s a different form of expression. For me to create this shuffle community, it’s a place for people to come and express themselves and listen to music and hang out in a very accepting and inviting group.”

Pham began hosting the shuffle meetup in July when COVID-19 had caused most dance events to shut down. He said masks are encouraged at the meetups and that attendees tend to be mindful of social distancing guidelines.

“We wanted to create something for people to come to even with shows being postponed and being canceled, that they can still go out and dance and be active and have a social experience, but with social distancing and masks,” Pham said.

The group isn’t just about shuffling, though. Dancing with LED-powered Hula hoops, poi and gloves are popular rave culture hobbies that also appear at the meetups, Pham said. Pham’s friend and fellow shuffler, Christian Satterfield, spends some of his time at the meetups capturing these artistic expressions on camera.

“A lot of times I’ll be shuffling by myself, or if others are coming through and they want tips on shuffling, we’ll give them tips, help them practice,” Satterfield said. “A lot of times I do the filming for it, too. I’ll bring a little camera setup and take quick edits, something [like] a recap of the weekly shuffle.”

Satterfield said he hopes publishing videos of the meetups will encourage more dancers to come out.

“Not too many people have seen it in a certain sense,” Satterfield said. “People get interested, see it online. We usually put some on Instagram pages and it brings people in, all these different types of people that are into the same thing.”