'I voted for everything else but the president’ 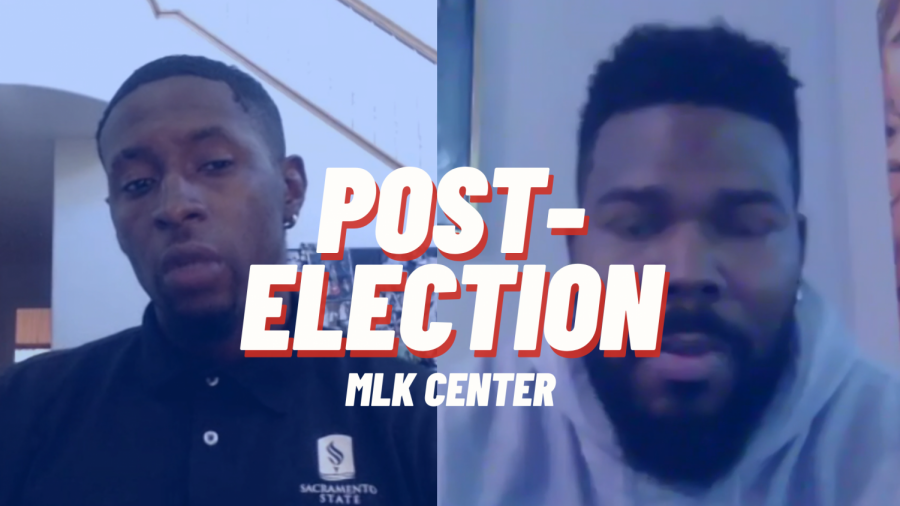 Sacramento State's Martin Luther King Jr. Center outreach coordinator Kaifa Yates said, “I voted for everything else but the president.” The Martin Luther King Jr. center held a voter dialogue that focused on the election and its impact on the Black community Wednesday, Nov. 4 from 3 p.m. to 4 p.m. via Zoom. Screenshots taken by Gerardo Zavala via Zoom.

For Kaifa Yates, neither of the candidates appealed to him in this year’s election, so he instead chose to only vote for the propositions and local races that he said will directly impact his community.

“I voted for everything else but the president,” Yates said.

Yates, Sacramento State’s Martin Luther King Jr. Center’s outreach coordinator said that African Americans should not have to feel like they have to pick a party based on their race, which is something he said his father and many others have told him since he was young.

The MLK Center at Sacramento State held a voter dialogue that focused on the election and its impact on the Black community Wednesday, Nov. 4 from 3 p.m. to 4 p.m. via Zoom.

Attendant’s and MLK Center workers discussed the impact the election is going to have on the African American community while providing a space for people to talk about the anxiety the election is giving them. They also spoke about their dissatisfaction with the presidential candidates.

MLK Center program coordinator Hakeem Croom said he also wasn’t enthusiastic about his choices, but chose to vote for Biden because of the negative impacts he felt another four years of a Trump presidency would have on his community.

RELATED: Joe Biden is the right choice for America on Election Day

“Either way this thing shakes out, we have to work to change our material condition,” Croom said.

Oku Best-Wilson, an ethnic studies major at Sac State, agreed that he is not happy with Biden either, but said he voted for him because he felt like it was better to vote for Biden than Trump.

“Because of the sacrifices my ancestors have made, I think it’s important for me to vote and participate,” Best-Wilson said.

Best-Wilson said he approached this election by voting locally and informing himself about the things that impact his community.

Mona Thompson Ross said that she’s not surprised at all of how close the election was. She said all Trump has done is given people with racist beliefs the license to behave in whatever manner they want.

“They’ve always been there, but they had to keep it under wraps [before],” she said. “At this point, whatever happens, happens. How are we going to continue to press through?”

Nicole Fowler, a media production specialist at Sac State, said that she has been dealing with anxiety since the polls started closing and numbers started coming in.

“I remember getting really tense and having headaches because of that anxiety,” Fowler said. “I know that I did my part, but it’s [not knowing how] the rest of the country [did].”

Fowler said she was not as anxious as she was on election day , but was worried of the possibility of having four more years of a Trump presidency.

Croom said the passage of Proposition 17, which gives Californians on parole from prison the right to vote, was a gain in this election.

“I’m excited to hear that California is taking a lead in doing something like that,” Croom said. “I hope it will reverberate in the future for other states to definitely follow along.”

Laws that were aimed at benefiting minority groups, such as Proposition 16, did not pass this election. This proposition would have repealed a ban on affirmative action policies in state and local governments and would allow institutions to give preferential treatment on the basis of race, sex, ethnicity and national origin.

“We’ll find creative ways to create pathways of equity and access when it comes to education and all those different things,” Croom said referring to Proposition 16.

Croom said the MLK Center is open to having more dialogues like these because of the impact this election has had on people.

“We’ll continue to check the posts and open up opportunities for us to build and process together,” Croom said.