This week in Hornet sports history: Week of 10/4 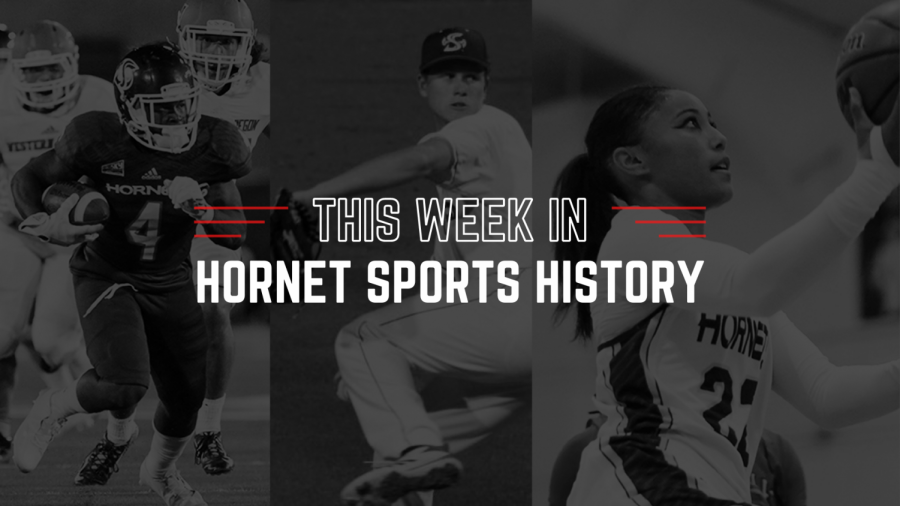 Flash back to the week of !0/4 in Hornets sports history.

With live sports currently on hold due to the coronavirus pandemic, sports writers for The State Hornet will be going through the archives each week to highlight some of the best performances in Sac State Athletics history.
Sac State Volleyball remains undefeated with win over North Dakota


The Sacramento State volleyball team stayed undefeated after beating North Dakota in the Nest on Oct. 5, 2017. The Hornets improved to 5-0 in conference play after a game decided in the fifth set which Sac State took 15-12.

In the previous season, Sac State had lost to North Dakota in five sets.

“That fifth set (last season) was heartbreaking,” junior outside hitter Mikaela Nocetti said. “This year, we were ready to play them for major revenge.”

Sac State featured many top performers in the night and was led by senior outside hitter Shannon Boyle who had 35 digs and senior setter Kennedy Kurtz who finished with 57 assists, 14 digs and seven kills.

Sacramento State men’s soccer moved to 2-1 in conference after downing Big West opponent Cal State Fullerton by a score of 1-0 on Oct. 6, 2016.

Senior forward Nate Nugen scored the only goal of the day for the Hornets which tied him with senior midfielder Ivan Ramirez for the season, who was red-carded and removed from the game.

Despite being down a player for the last 17 minutes of the game, Sac State played lock-down defense to hold on for the win to improve to 6-4-1 on the season.

“Spirits are soaring right now,” Nugen said. “6-4-1 is a phenomenal record to have, 2-1 in conference, securing six points here and now early in the conference run.”
Sac State Football takes down Northern Colorado on homecoming

Sacramento State football moved to 2-0 in Big Sky Conference play with a 37-21 win over Northern Colorado on homecoming on Oct. 5, 2013.

Two running backs, freshman Jordan Robinson and junior Brandon Kellermann, debuted for the Hornets and combined for 216 total yards and a touchdown.

“We’re kind of like a tight-knit group, whoever is getting the ball, if I’m in blocking or anyone else is in blocking for me, we’re sharing the love,” Kellermann said. “It’s good to see [Robinson] score – I’ll lead block for him for the rest of the season.”

Junior quarterback Garret Safron and junior wide receiver DeAndre Carter combined for three touchdowns, including a 15-yard reverse by Carter that resulted in a score.

“We got into a good rhythm (and) I thought [Safron] did a good job of running the offense,” Sac State head coach Marshall Sperbeck said.