BAOBAB takes the stage after months of jamming in isolation 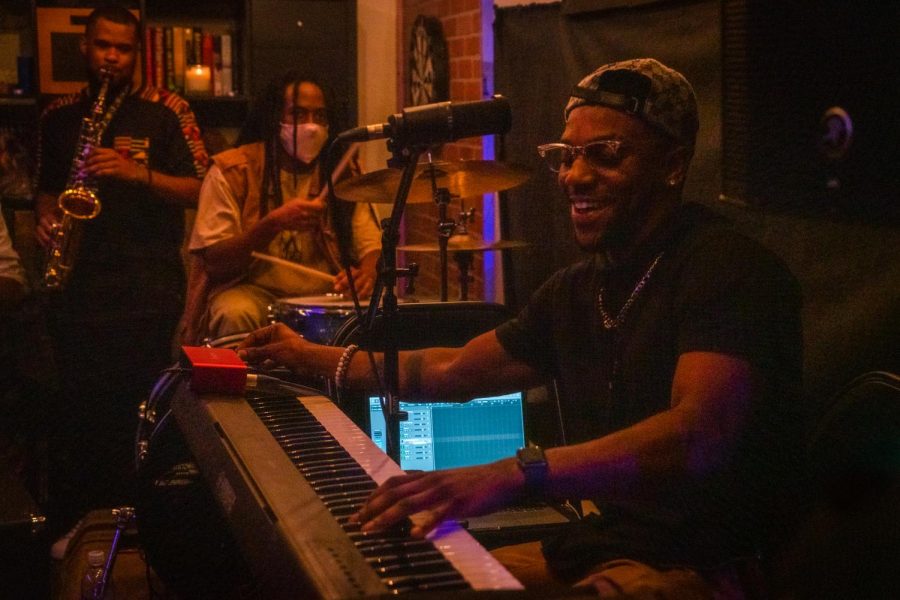 With the night winding down and the energy going up, Sacramento State senior Greo the Storyteller asked everyone at Taylor’d Mind Studios to get out of their seats, and 15 people in masks danced along to a performance from Greo and her six-piece band BAOBAB in a moment of liveliness amid a pandemic.

Studio owner Taylor Pannell, 29, said she focuses on community outreach of all demographics.

“I do have people from ages 65 to 2-years-old who come to my events,” Pannell said.

The Open Mind Nights have attracted the likes of Sac State students Greo the Storyteller, singer and rapper, and Okumoja Best-Wilson, djembe player for the band BAOBAB.

The space where the performances are held is a colorfully lit room with art on every wall and a small stage where a cappella songs, spoken word poetry and local bands can share art with a small group of people – due to the state of the pandemic, Pannell said she can only allow a limited number of people into the studio space.

Entering the studio after a temperature check, the first section visible is the current art exhibit, where a table of fruit hors d’oeuvres is set for guests. Down the main hallway is the performance space with the stage and a house DJ set up in the corner.

During Thursday’s performance, the artists took turns sitting in the crowd and sharing the creations they worked on during their time in isolation with the audience in an intimate setting.

“Prior to COVID I was just having gigs as a horn player, but since COVID hit, I was forced to work on my producing jobs,” said Joey Archie, BAOBAB’s synthesizer and trumpet player. “I actually released two records that probably would have never happened if it wasn’t for COVID.”

The performances started off mellow and thoughtful, from solo singing acts to poetry to a DJ set, and after a brief intermission, the main event took place: a set of songs from the band BAOBAB.

BAOBAB played a four-song set with an encore that changed the mood of the night from a serene collaboration of shared self-expression, to a concert-style performance with the attendees dancing and singing along to the songs.

Greo said that BAOBAB is a Black American music band, and the name of their band signifies a sacred tree in Africa that “cannot be killed and is virtually indestructible,” which is how they would like their music to be presented.

“At the end of the day, the gig is extra, we do music because we love it, it’s in our spirit and in our soul,”  said Greo when asked how the global health crisis has affected being a musician. “With the pandemic, when it went away, it didn’t make us engage with music as much as we did before or lessen the way we involved ourselves in music.”

While both Greo and Best-Wilson are working toward graduating next semester they both said they have set their schedules and priorities to be tuned to their needs, keeping music within their everyday lives.

“I’m a musician, I’m an athlete and I’m a student leader as well, so I have to be able to balance all of these things, as well as my own personal schooling,” Best-Wilson said. “So it’s tough, it’s an adjustment and it’s a challenge.”

A commonality the band shares in regard to being musicians during a pandemic is that regardless of whether or not they can perform, they said they find that having music with them every day helps them cope with the stress of living through the current times.