Tributary expected to be completed by fall 2021 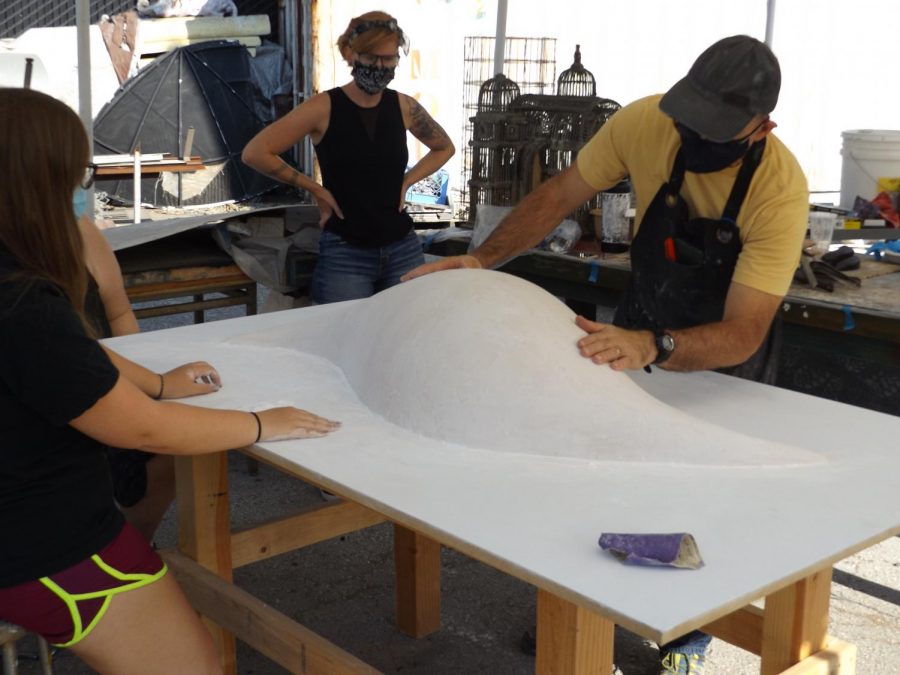 Professor Andrew Connelly inspects the mould for the small trial versions of a piece titled Tributary, at the Art Sculpture Lab, Thursday, Sept. 17, 2020. The full size piece is expected to be completed and installed near the new Welcome Center in fall 2021.

A new sculpture named Tributary is being made for Sacramento State, commissioned by Vice President of Student Affairs Ed Mills.

Expected to be completed during the fall 2021 semester, the sculpture is going to be placed in front of the new Welcome Center, said Andrew Connelly, the studio art and sculpture professor in charge of construction.

“It will be nice to have an interesting, artistic and aesthetically pleasing piece to look at,” said Cassandra Quinn, an art student working on the piece.

The piece was designed in collaboration by art students Andrew Rosas, Isabella Flanagan and Janelle Marcione, as well as several research and development groups. Tributary is being worked on by several art students and is visually broken down into three separate parts to match its three separate colors and pieces.

According to an informational PowerPoint on the piece by Rosas, Flanagan and Marcione, the blue represents both the American River and the Sacramento River, and how they are major landmarks for Sacramento. The red belongs to the Sac State torch and its flame of knowledge. And the green portrays Sac State’s commitment to being eco-friendly, in addition to Sacramento being known as the “City of Trees.”

According to the PowerPoint, the specific pieces of Tributary are based off of leaves from the California bay laurel, a fragrant tree found all over campus.

The piece is designed to be 14 feet tall and made of frosted ultraviolet resistant acrylic panes on top of a steel frame interior which itself houses high luminance LED lights.

Connelly also said that during their research and development meetings the environment was an important issue, specifically whether the sculpture would be able to withstand the sun and heat for long periods of time.

Research and development was done by multiple groups of students in order to determine what the best materials and use of space would be.

“The nice thing about the site is it’s in partial shade,” Connelly said.

Heat, smoke and COVID-19 have disrupted the students’ normal work schedule on the piece.

Connelly said that the art students had only been able to work on the sculpture for about eight weeks in January before COVID-19 shut down campus, and that during this semester his first week was spent catching everyone up.

The students were originally working inside the Art Sculpture Lab building, but with no air conditioning it was difficult to continue, Connelly said.

COVID-19 wasn’t the only issue however — this summer’s fires and high temperatures proved to be disruptive as well.

“No way we could’ve worked that day,” said Melanie Ries, another student working on the piece referring to a day class was cancelled because of smoke. “It kind of sucked because it was too hot to work outside some of the [other] days.”

Connelly said the students have halted work on Tributary and are working on 4-foot tall trial pieces for multiple locations, such as the Sac State downtown office.

These pieces — smaller versions of the main sculpture — will be used to help students perfect their technique to ensure they are ready for when Tributary’s time has come to be completed.