‘See you next fall’: No college football for Hornets this season 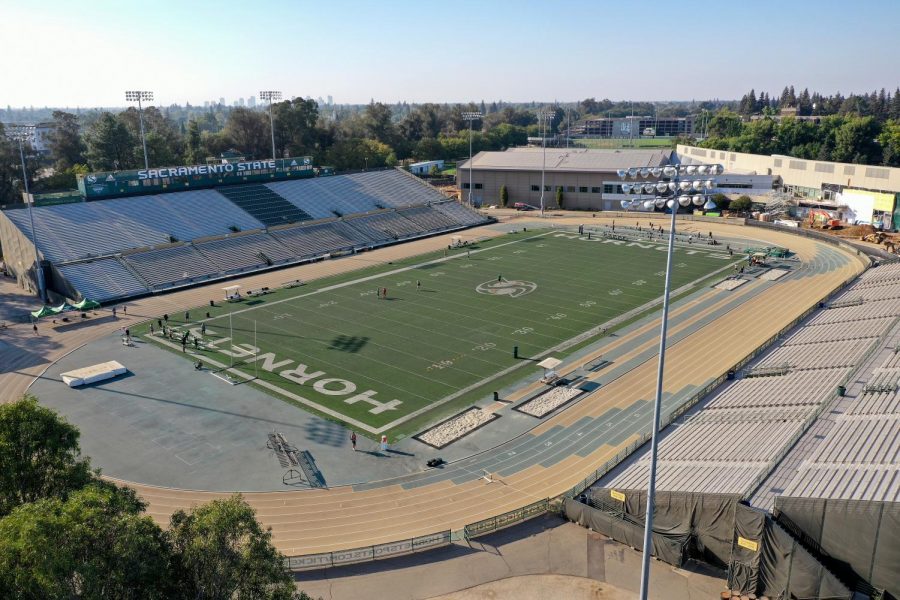 Hornet Stadium on Oct. 6, 2020. The Hornets football team will opt out of the spring 2021 Big Sky Conference season, meaning they will not participate in conference play until fall 2021.

Sacramento State football has announced that they are opting out of the upcoming spring football season, according to an email from Assistant Athletic Director Brian Berger.

“Our concern regarding the effects of a short turnaround from a spring season to a fall season, in our opinion, were too big of a health risk,” Hornets head coach Troy Taylor said.

Taylor added that Sac State will keep all of its seniors on scholarship and this year will not count towards their eligibility.

Sac State Athletics relies on state funding and the entire CSU system will receive $300 million less from the state than last year, but Taylor said that finances were never part of the discussion with Sac State athletic director Mark Orr and President Robert Nelsen when discussing spring football. Orr said that the department is always looking to be fiscally responsible but that this decision was about health and safety.

Orr said this decision doesn’t affect the status of other sports and strictly pertains to football.

The Hornets, who were Big Sky co-champions, would have been forced to play a spring season before the FCS playoffs. Those playoffs would run from April until May 14-16 which is when the championship game would be held. With the 2021 season beginning at the end of August, a team that advances to the championship in the 2021 spring season and the fall season would have to play 26 games in less than 12 months.

“It is disappointing,” Sac State President Robert Nelsen said. “COVID-19 has brought many disappointments, and we are sad. But postponing our fall season due to COVID-19, and opting out of spring due to the truncated season and the risks it could cause to our players’ well-being, are not the biggest disappointments brought on by the pandemic.”

Senior quarterback Jake Dunniway said it has been hard for new teammates to bond and to keep the same motivation only practicing in pods of 12 players.

“It’s hard because we love spending time with each other and right now we have to do what the county allows in order to keep each other safe,” Dunniway said.

Sac State will continue to prepare for the traditional 2021 fall season and will maintain scheduled practices and team activities throughout the 2020-2021 academic year, Berger said.

“We trust and believe in our coaches to make the best decisions regarding our health, so we’re just going to keep working and prepare for the 2021 season,” senior defensive back Prince Washington said.